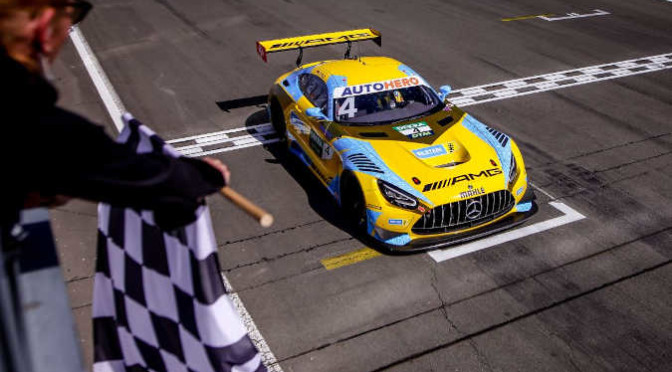 The second DTM gala at Nürburgring: following the first-ever 1-2 for brother pairing Sheldon and Kelvin van der Linde in DTM history on Saturday, Luca Stolz scored his maiden win in the long-standing series on Sunday. The 27-year-old, living in Brachbach in the German Westerwald region, secured a much-celebrated home win in the DTM Nürburgring powered by Mercedes-AMG event for his Mercedes-AMG Team HRT, based in the Nürburgring business park in Meuspath. In an intense race, Norwegian Dennis Olsen came second with the SSR Performance Porsche while the winner of the season opener, Lucas Auer (AUT, WINWARD Mercedes-AMG) was on the podium after finishing third in the 90th DTM race at the Nürburgring.

“Finally! Finally!,” a jubilant Luca Stolz said on the radio after crossing the finish line, one year after his guest drive in DTM at the same venue. “It is fantastic! The pit stop was decisive. Thanks to all of you,” said Stolz, who promised his crew a beer crate. In the championship standings, Sheldon van der Linde (RSA), a three-time race winner this season who only finished ninth in the Sunday race, defended his lead with 110 points. “After the restart following the safety car intervention, my race was basically over. Even though there are still six races remaining, I am confident for the title battle, we have a strong car,” the BMW driver of the Schubert Motorsport team said. With 89 points, Mirko Bortolotti (ITA) remains in second place, although the Lamborghini works driver was a bit too eager in the battle for fourth against Kelvin van der Linde (RSA, ABT Audi) in the closing stages of the Sunday race, like he had been on Saturday already against Felipe Fraga (BRA, Red Bull Ferrari) on Saturday. As a result, he casually lost a possible total of 28 points over the weekend. Auer, now at 85 points, moved ahead of René Rast (GER, 81) into third place, Luca Stolz is now fifth in the standings with 73 points.

Qualifying on Sunday morning already produced the first sensation of the day: 20 cars were within only 0.326 seconds, a proof for the incredibly close competition in the 2022 DTM! And like in the race on Saturday, the van der Linde brothers stood out: Sheldon van der Linde claimed pole position with the Schubert BMW, his brother Kelvin was one hundredth of a second slower in what was the closest qualifying of the season so far and secured second place on the grid. Mirko Bortolotti was fourth-fastest, but he started ninth following a penalty from the previous day due to the collision with race leader Felipe Fraga.

With the large field of 28 GT race cars, DTM put in a picture-perfect race start at the 3.629 kilometres long Nürburgring sprint circuit, in excellent summer weather in sharp contrast to the previous day. From fifth on the grid, Philipp Eng (AUT) skilfully moved up into second behind his teammate Sheldon van der Linde, with Dennis Olsen in the SSR Porsche, Thomas Preining (AUT) in the KÜS Team Bernhard Porsche and Luca Stolz in the HRT Mercedes-AMG next up while Kelvin van der Linde had lost some ground.

On lap four, David Schumacher (GER) with the WINWARD Mercedes-AMG caused a preliminary decision as he tangled with the ABT Audi of René Rast (GER) in the final corner, after which the latter’s car slid into the gravel bed. Both drivers retired and the incident prompted a safety car intervention. “I was taken out, like yesterday. Like this, it is no fun,” the three-time DTM champion ranted. Like often in DTM, the restart considerably mixed up the order in the field. After a perfect pit stop, Stolz found himself in the lead from Olsen, Lucas Auer, Kelvin van der Linde and Bortolotti, who benefitted from this part of the race, while Sheldon van der Linde massively lost out in tenth place. Out in front, Luca Stolz extended his lead more and more and brought his maiden win home in a commanding way, followed home by Olsen and Auer.

After the two spectacular Nürburgring races, there is no time to relax in DTM. The next encounter already follows in a fortnight (9-11 September) with the eleventh and twelfth race of the season at the Belgian Grand Prix circuit of Spa-Francorchamps before the battle for the title heads onto the home straight at the Red Bull Ring (23-25 September) and in Hockenheim (7-9 October).