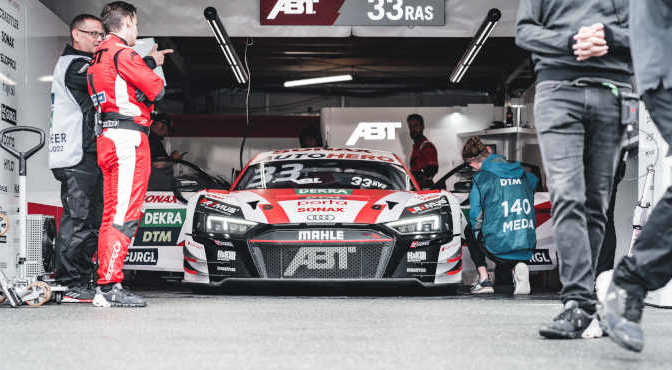 After an unusually long summer break, the second half of the DTM season begins next weekend. In a 14-day rhythm, races will be held at the Nürburgring, Spa, the Red Bull Ring and Hockenheim, before the new DTM champion will be crowned. René Rast, in his ABT Audi R8 LMS GT3 evo II, is only ten points behind championship leader Mirko Bortolotti in the Lamborghini. Of the three ABT drivers, Rast has the best chances of winning the title. Below we have an interview with the three-time DTM champion before the two DTM races at the Nürburgring (Both races will be live on ProSieben from 1 PM CEST on Saturday and Sunday).

The DTM had an unusually long summer break – what did you get up to? Where and how did the Rast family go on holiday?
At home, in Bregenz in Austria. We had a fantastic summer. For me, a holiday is when I’m at home. That’s why it was a great time. I did a lot of sports, went hiking or cycling every day. I enjoyed the days off and just spent some time with my family. It was a very nice holiday. Of course, I also did a bit of training.

Right after the Norisring, your management invited all of the drivers to a joint fitness week in Kitzbühel – including Sheldon van der Linde, one of your biggest rivals in the title fight …
I’ve known Kelvin and Sheldon for a long time. Of course, Sheldon is a competitor, but only on the track when we have our helmets on. When we’re meeting up privately, we’re good friends. There’s no rivalry at all. That’s why it was very relaxed in Kitzbühel. We simply have a good relationship.

Before the second half of the season, you are only ten points behind championship leader Mirko Bortolotti. How do you rate your chances of winning the title?
It’s difficult to judge. Of course, it doesn’t look that bad now. But there are still four weekends to go. There are still one or two tracks that might not suit us so well – the Red Bull Ring, for example. We have to wait and see how the season develops. We always have to be among the front runners and not make any mistakes – then we have a chance. But I think it will be very difficult. The Lamborghini, especially, is very strong this year.

You tested at Spa during the summer break. What did you learn from the test?
The Spa test was for us to gather setup data. We ticked off the most important points, although it wasn’t an easy test, because there were a lot of red flags. We had to compromise on what we tested, because of the reduced time. Hopefully we found out the right things and drew the right conclusions.

During the season’s final phase, there will now be races every 14 days. What will be the important points for this?
Preparation is not as crucial as it used to be in Class 1 or Formula E. It’s mainly about maximising the weekends. No stupid mistakes. Getting everything spot on, especially in qualifying. Scoring points in the races is crucial. Don’t make any mistakes there either, don’t risk any penalties. Good pit stops, good strategy. These are the key factors. We are only halfway through the season, so a lot can still happen.

There are four very different tracks on the calendar. Which ones suit you and the Audi R8 LMS, and which ones less so?
I don’t think the Red Bull Ring suits the Audi so well. Nürburgring, Spa and Hockenheim should be tracks where the Audi is not so weak, but the others are also good there – especially BMW, Lamborghini and Ferrari. I also believe that Felipe Fraga will still be a title contender with the Ferrari. He has had a lot of bad luck and is not far away.

As a motorsport fan, why would you come to the Nürburgring next weekend?
Because it’s one of the most beautiful tracks in Germany. An exciting fight for the title. Lots of cars. Open paddock. And often exciting weather: it can change quickly in the Eifel.

Before the season started, you weren’t sure if you would like the GT3 DTM. What is your impression after four race weekends?
First and foremost, I wasn’t sure whether it would suit me. The fans like it because of the variety of brands. There are many different cars that have different sounds. For the fans, that’s cool. For me as a driver, however, there is a difference (to Class 1). The cars are a bit slower and the overall level is not quite as high, but the GT3 DTM is still fun.

You have two very strong teammates at ABT Sportsline. How do you get on with Kelvin and Ricardo and how would you characterise them?
I get on well with both of my teammates. Especially with Kelvin, who I have known for a long time. Kelvin is a thoroughbred racer who has always been very emotional. Of course, he is a very fast guy. He knows how to handle the R8 well. The same goes for Ricardo. He also knows how to do it. Ricardo is completely different to Kelvin. A very calm guy. A typical Swiss. Relaxed and laid-back, but when it comes down to it, also very aggressive in the car and very fast.

You will be leaving Audi at the end of the year. How difficult was this decision for you?
After such a long time at Audi, it wasn’t an easy decision to make that we’re now going down a new path and looking for alternatives. Audi has been my home and family for a long time. Unfortunately, there were few motorsport prospects and development opportunities for me there. That’s why we unfortunately had to decide to leave Audi. But it was certainly not an easy decision.

You’ve been driving for ABT Sportsline in Formula E and DTM for just over two years now. What are your impressions?
The ABT team works very professionally and analytically – and at a very high level. It’s a lot of fun to work with the guys and girls. Everyone is always highly motivated and never gives up. It’s a great team. The mechanics are also great guys, who are always helpful when something is critical. It’s really a lot of fun with them.

If you win the DTM title and you were granted a wish, to be fulfilled by Thomas Biermaier and Hans-Jürgen Abt, what would it be?
A weekend on the Sonnenalp together with everyone from the team. Snowshoe hiking, going to a hut in the evening, partying a bit, letting the year end like that – that would be really cool.

Quotes before the DTM races at the Nürburgring

Thomas Biermaier (Team Principal): “After the Norisring, we drew a mid-term conclusion and analysed where we could improve further, rebuilt the three cars, practised pit stops and tested one day with René at Spa – that was very important for the preparation for Spa. We also allowed ourselves a little holiday. Now we are looking forward to the second half of the season and exciting races. With the Red Bull Ring and Spa, we still have two difficult tracks ahead of us. But we will give everything to be involved right in the thick of it in the title fight at the end.”

Kelvin van der Linde (ABT Audi R8 LMS GT3 evo II #3): “I am looking forward to the second half of the season. Everyone in the team – engineers, mechanics, drivers – have had a good energy boost during the summer break. I am not used to having such a long summer break and I made good use of it. My batteries are full again and I’m looking forward to an exciting second half of the season. I want to help us move up in the teams’ championship and, of course, win a race or two. I’ve already had a lot to celebrate at the Nürburgring – including winning the 24-hour race this year. I would like that to continue in the DTM.”

Ricardo Feller (ABT Audi R8 LMS GT3 evo II #7): “I have fond memories of the Nürburgring and hope to build on them in the DTM. Unfortunately, things went very badly for me in the GT Masters there this year. I’d like to put that right, because I really like the track. I was able to clinch my biggest motorsport title there last year. I’m hoping for a great weekend at the Nürburgring. I think the characteristics of the track should benefit our car.”

René Rast (ABT Audi R8 LMS GT3 evo II #33): “I’m really looking forward to the Nürburgring weekend. After such a long summer break, it’s about time we finally raced again. I am third in the standings, only ten points short of first place. I’m highly motivated to keep the ball rolling and close the gap as much as possible. The Nürburgring has always been a good track for me in the DTM – especially when I think back to 2018 with the two wins, double pole and setting the fastest race lap twice. That was a highlight. In general, I like being there. It’s a nice track with a nice atmosphere and lots of fans – it’s definitely one of the nicer events of the year.”

… Kelvin van der Linde is playing in the “Champions for Charity” charity football match in Frankfurt on Wednesday evening in honour of Michael Schumacher – even though Kelvin has no previous football experience?

… Ricardo Feller was a guest at the MediaMarkt cooking show in Ingolstadt on Monday evening?

… Ricardo Feller – unusually for a Swiss – doesn’t like cheese (let alone cheese fondue) and doesn’t do skiing either?

… Kelvin van der Linde made an appearance with his ABT Audi R8 LMS GT3 evo II at the “Audi Race Days” of ABT partner Audi Hamburg last Saturday – signing autographs and giving interviews?

… Johannes Remmele, owner of the ABT partner Südpack, will be a guest at the Nürburgring with his entire family?

… René Rast used the DTM summer break to christen his son Liam and the ceremony took place exactly six years to the day after his first DTM race at Zandvoort?

… ABT partner Fujitsu is producing a film on the subject of “artificial intelligence in track safety” on Thursday evening on the Nordschleife with Kelvin van der Linde and the ABT Audi R8 LMS GT3 evo II?

… the Scherer Group is expecting around 400 guests at the Nürburgring?

… the three ABT drivers and Thomas Biermaier will be in the Scherer Lounge above the pits for interviews during both race days between qualifying and the race?

… Julian Schmidt from the “Gruppe C” agency won the ABT DTM Photo Challenge at the DTM race at the Norisring?

… not only professional photographers, but also fans, can take part in the Photo Challenge?