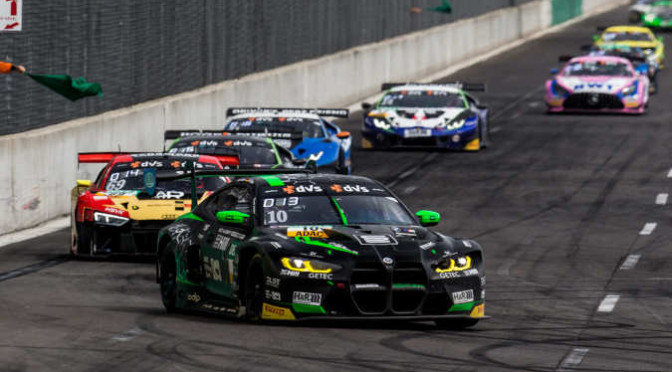 Trier-based Niklas Krütten from the Schubert Motorsport team continues to score valuable points in his rookie season in the ADAC GT Masters. The 19-year-old and his British partner Ben Green twice finished in the points at the Lausitzring, bringing the BMW M4 GT3 home in eleventh place on Saturday and ninth on Sunday. In doing so, the former ADAC Stiftung Sport driver tightened his grip on the lead in the Junior competition. Krütten lies fifth in the overall standings, still within striking distance of the leaders.

Saturday’s ADAC GT Masters race was particularly testing. Heavy rain made the first race of the weekend at the 3.478-kilometre Lausitzring a real challenge. Starting from 18th, Krütten worked his way up the field, before Ben Green continued the good work in the second half of the race. “It was important for us to stay clear of all the turmoil, where possible, in order to avoid damaging the car or crashing out. That was not always easy in that weather,” said Krütten. In the end, the duo crossed the finish line eleventh in the BMW M4 GT3 to pick up valuable points.

Sunday’s result was a little better. Krütten took over at the wheel with the car running 13th, and was able to gain three positions by the end of the race, thanks to some good overtaking manoeuvres. The team also benefitted from a penalty handed to one of its rivals and was subsequently promoted to ninth, earning them another seven important points in the title race.

Niklas Krütten: “That was a very difficult weekend for us. We simply did not find the right set-up in the heavy rain on Saturday, and were not able to get the tyres working. Unfortunately, that was clear from our times. In Sunday’s qualifying session, we switched to slicks a little too late to secure a better grid position. However, the race was pretty good. Ben handed the car over to me in 13th place and I was able to get up to tenth. Unfortunately, that was the best we could do. Fortunately, a penalty for another team meant we were promoted to ninth. I think the BOP needs adjusting for us, as we are there or there abouts, but unfortunately not right in the thick of the action.”

Krütten returns to action this weekend, when he lines up in an LMP2 car for the COOL Racing team in the ELMS race in Barcelona.
As the ADAC GT Masters event at the Sachsenring clashes with the ELMS, Krütten will next race in the ADAC GT Masters at the season finale at the Hockenheimring.