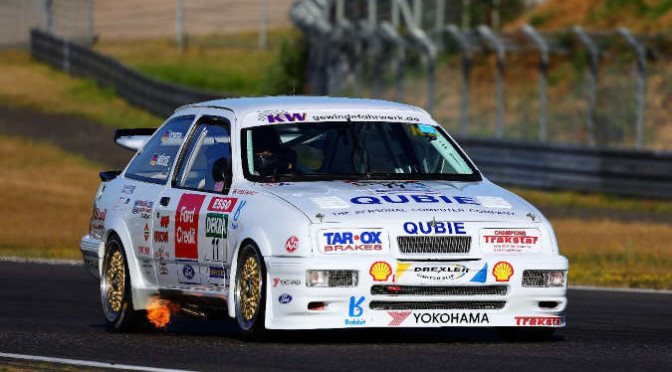 During the 49th AvD Oldtimer Grand Prix at the Nürburgring, the only DTM Classic round away from its own race weekends, the DTM Classic Cup with cars from the years between 1984 and 2007 already caused excitement on Saturday. In a thrilling finale, Ronny Scheer from Dresden came out on top with his Ford RS 500 run by the BWT Mücke Classic team and was first across the finish line after 13 laps. Just over half a second behind him, Dane Steffen Lykke Gregersen, who had led the race for a long time, claimed second place with his BMW M23. Gerhard Füller came third with his Opel Vectra. The three were separated by only 0.754 seconds at the finish.

The summerly temperatures on Saturday also had their effect on the equipment. For instance, the fastest car from qualifying, the Opel Calibra 2.5 V6 4×4 run by BWT Mücke Classic, couldn’t participate in the race at all due to an issue with a valve shaft. As a result, Yannick Trautwein started the race from first place with the BMW E36 of the Schnitzer Classic team, but was forced to retire early due to loss of power. Dane Steffen Lykke Gregersen and Gerhard Füller started second and third respectively. At the start, Gregersen had the better of Trautwein and took the lead that he kept until lap ten. Then, Ronny Scheer, who had worked his way up from sixth on the grid with his Ford Sierra in commanding fashion, started an attempt to overtake and moved up into the lead. Three laps later, he brought his second win of the season home, but had to deal with a fiercely attacking Gregersen, who concluded his maiden DTM Classic outing in second, and Füller, who ended up third.

“Winning here during such an event is a beautiful feeling”, winner Ronny Scheer commented immediately after the race. “It was a great, absolutely beautiful and fair battle for first place.” Steffen Lykke Gregersen also praised the fair competition: “At the end, it was really close and we were three abreast in the final corner, but there was no contact. I am really happy with the result and I hope to be able to move up one further place tomorrow.”

For many laps, Moritz Horn was in a close fight with Leonard Batenburg and Marc Hessel. After multiple position changes, the three BMW drivers finished in that order in fourth to sixth place, followed by Thomas Wandel in his powerful and loud Audi 200 quattro. Austrian Willy Salzgeber (Audi A4 STW), DTM legend Olaf Manthey (BMW 635 CSi) and Markus Reich (AUT, Audi A4 STW) rounded out the top ten.

DTM Classic action during the 49th AvD Oldtimer Grand Prix continues tomorrow with the sixth race of the DTM Classic Cup season, getting underway at 5.45pm. The second race can be watched live at grid.dtm.com as well.