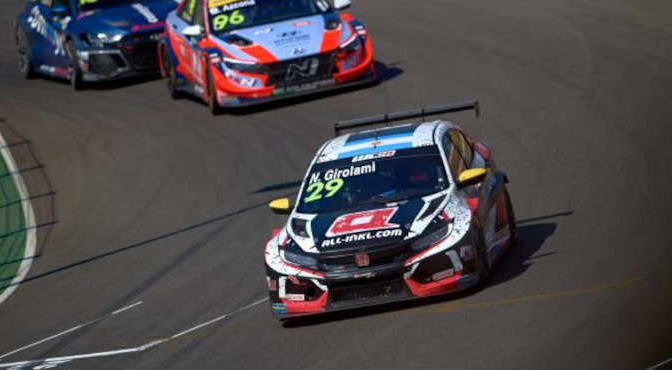 The Argentinian backed up his third pole position of the year with a second-place finish in Race One at Anneau du Rhin, which represented the best return possible given the prodigious speed of his competitors along the kilometre-long main straight.
In hotter conditions in Race Two, Nestor found the handling of his ALL-INKL.COM Münnich Motorsport Civic Type R TCR more difficult but he still came home seventh.
It allowed ‘Bebu’, who is second in the Drivers’ Championship, to reduce his arrears in the standings to 35 points with two rounds of the season remaining.
Team-mate Esteban Guerrieri had put up a stern defence of fourth place in Race One, but was forced to pit when he flatspotted his tyres while saving a slide, having been hit by the car behind through the high-speed Turn 1 right hander.
ALL-INKL.COM Münnich Motorsport brought the record WTCR win holder into the pits but did send him back out, and Esteban recorded a 10th-place finish as a result.
Race Two yielded the same result, though Esteban had been on for seventh until he was collected by another competitor at the penultimate corner on the final lap of the race.
Tiago Monteiro secured his best result of the season with a perfectly judged drive to sixth in Race Two.
The Portuguese made his own destiny with an excellent launch from fifth on the grid, passing one car and challenging another into the first corner to run fourth in the early stages.
Though he conceded two positions to cars with unchallengeable straightline speed, Tiago’s pace was such that he kept them in sight and could gap the pack behind.
That sixth-place finish coupled with ninth in Race One gave him his best points haul of the season.
A weekend that promised plenty for Attila Tassi on the other side of the garage ended with a best result of ninth.
The Hungarian showed strong pace throughout Saturday until being delayed on his final run in Q2, which cost him a place in the top 10.
That consigned Attila to a starting spot near the back for both races, and a battling display in Race One, in which he received a huge hit from a competitor, went unrewarded as he was forced to stop four laps from the finish.
His Race Two was less eventful, with Attila finishing the weekend by keeping his nose clean and taking a place in the top 10, profiting from the last-lap incident that Esteban was involved in.

Néstor Girolami 29
ALL-INKL.COM Münnich Motorsport
Taking another pole position and a podium has to go down as a good weekend for us. Race One was all about doing a good start and I managed that, but I couldn’t break the speed of the other car on the front row and I had to concede the position. After that, it was all about defending and I was really pleased with this, especially holding position a couple of times by going side-by-side through Turn 1, always with respect and fair play. In Race Two we didn’t have the pace in the hotter conditions and I felt a little more understeer, so I just conserved what I had to make the finish.

Esteban Guerrieri 86
ALL-INKL.COM Münnich Motorsport
Considering the potential we had, it wasn’t an easy Sunday. I got hit while I was running fourth in Race One, and that put me out of contention for the big points because I locked up all four tyres and had to pit as a result. In Race Two we didn’t really have the chance to attack or move forward. I tried to maintain a consistent pace throughout, then there was a bit of confusion because I was hit from behind at the penultimate corner while I was trying to slow down to let Nestor through as well. Even so, the cars in front seemed much quicker; they were flying on the straights.

Tiago Monteiro 18
LIQUI MOLY Team Engstler
We came to an unknown track but it’s been a really good event – great crowds, really well organised, and some great racing – so it felt even better to do my best result of the season here. We felt the pace was there all weekend; the chassis was really good and the car was nicely balanced. There was a downside which was the straightline speed difference between us and our competitors. There are of course many factors, but it felt like in the races we were penalised a bit because the car was otherwise really strong in the technical section. But we learned more again this weekend and we showed that if we start at the front we’re capable of staying there.

Attila Tassi 9
LIQUI MOLY Team Engstler
In both races I was able to make a good start compared to those around me, but the straight was just too long for those starts to make a difference and gain anything – it was the same once we were racing too. In Race One, I was trying to take advantage of a fight in front of me but I had a big hit from another car that put me completely off-line and left me with damage, but it wasn’t penalised. I was able to jump one car at the start in Race Two by keeping it clean but it was impossible to defend on the straight. Nevertheless, we extracted the maximum from the car, so thank you to LIQUI MOLY Team Engstler and Honda.