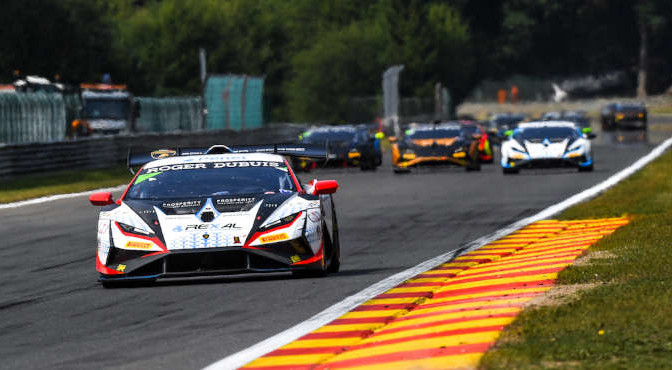 The Rexal FFF Racing Team found the redemption it was looking for at the Circuit National de Spa-Francorchamps, finishing on the podium with four out of five crews! The fourth round of the Lamborghini Super Trofeo Europe 2022 represents the turning point of the championship and the Rexal FFF Racing Team have kept up the positive trend of the last few races by conquering important points for the final classification. The five crews lined up at the iconic circuit gave their best and, thanks to the irreplaceable support of the team, all of them contributed to make the campaign a real success.

The first positive result was achieved in the AM Cup by Claude-Yves Gosselin, flanked once again by Marc Rostan, who took a double podium finishing P2 in Race 1 and P3 in Race 2. The drivers of the #4 crew produced a solid performance that brought them closer to the top of the AM standings, the clear goal of this increasingly fast pair.
In the Pro-AM Cup, Oscar Lee and Dan Wells managed to take an important P4 in Race 1, despite an unfortunate contact with another car on the first lap, which allowed them to keep the second position in the championship standings. The #51 crew, however, knows its abilities and possibilities: also thanks to the great support of the whole team, who did an excellent job cooperating in great harmony, it made it clear how much it deserves to be at the top of the leaderboard with a beautiful third place finish in Race 2 despite another unfortunate contact. It was an uphill race for the fast and talented drivers of the #51 crew, but the summit turned out to be the sweet podium they deserved.
In his second race in the Pro Cup of the Lamborghini Super Trofeo Europe 2022, Rodrigo Testa gained an excellent P5 in Race 1 on Friday. Building on the previous day’s results, he improved in Race 2 by scoring an excellent P3 that showed how much he’s growing and getting faster.

In the LC Cup there were Donovan and Luciano Privitelio, back together at the wheel of the #8 Lamborghini Huracan ST EVO2 after the Adriatic round of the campaign, which saw Luciano race solo. After an excellent qualifying session, the two drivers were not satisfied with the P5 achieved in Race 1 and they further improved their race pace, finishing on the second step of the podium in Race 2. With this amazing performance, the solid pair of the #8 car has kept up the positive trend of the recent campaigns, confirming once again their qualities.

In the same LC Cup, this weekend raced also Kumar Prabakaran. He achieved two good results thanks to a solid performance: the #72 driver finished P6 in Race 1 and P5 in Race 2. The road to the podium is getting shorter and the Malaysian driver’s improvements are the best proof of that.

The whole Team is now focused on bringing on this positive momentum and conquer the Spanish round of the championship thanks to the same commitment, cooperation and cohesion that allowed them to get this far and achieve such amazing results. The fifth round of the Lamborghini Super Trofeo Europe 2022 will take place in Barcelona from 30 September to 2 October.

Giorgio Ferro – Team Manager
“We come back from the University of Motorsport very satisfied with the Team results. After a solid performance by all of our drivers in Race 1, four of our pairs took in the top three of their class in Race 2. The way they achieved these amazing results makes us very proud. Our young talent Rodrigo Testa fought like a lion with the Pro drivers showing once again how fast he is growing, despite being 16 years old. Kumar was consistent throughout the weekend, and Claude-Yves and Marc showed their blistering pace by catching a double podium in the Am class. Dan and Oscar are no longer a surprise, being a constant presence in the top 3 of Pro-Am, as are the Privitelios in the LC Cup. Now let’s enjoy a well deserved holiday, to be ready to fight again in the second part of the season”