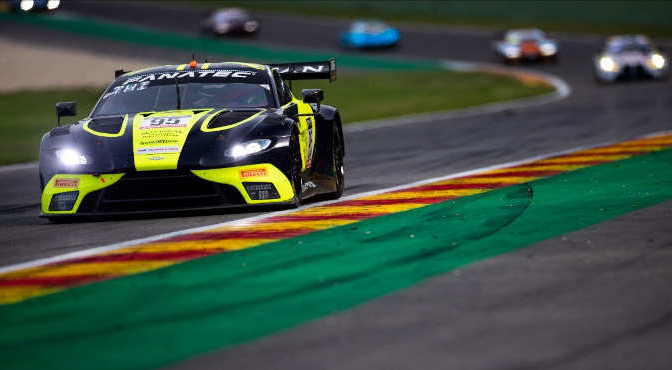 Beechdean AMR scored their best result of the Fanatec GT World Challenge Europe powered by AWS Endurance Cup season in the most gruelling edition of the 24 Hours of Spa in living memory last weekend.

But the result only tells a small part of the story of a race that will go down in history as one in which reaching the chequered flag represented something of a triumph.

Working their way forwards through Thursday’s practice sessions, the #95 Vantage made it through to the two-lap ‘Superpole’ shootout that determined the polesitter and qualified 16th in class thanks to Belgian hero Maxime’s efforts.

The race began in typical Spa fashion with several cars sustaining instant damage, but both the #95 and #97 Vantage GT3s began off strongly with Nicki and David on driving duties.

A slew of Full-Course Yellow and Safety Car periods upset the rhythm of the race through Saturday afternoon and into the night and meant that adaptability became even more of a factor than normal at Spa.

While the current series Balance of Performance (Bop) meant that the Vantage could not match some of the other models at Spa on pure pace, a combination of flawless driving by Nicki, Marco and Maxime and a sensational strategic plan meant that as the sun came up on Sunday morning, with 10 hours left, #95 lay a staggering fourth overall.

For the next eight hours the position of the car fluctuated around the top 10 based on where the pit cycle was at any given moment, but as the various strategies began to converge with three hours left, the car’s fortunes took a nosedive.

Side-by-side contact at Eau Rouge between Nicki and the eventual race winner at a time when they were battling for third led to the Dane spinning wildly through 540 degrees up the hill and coming to a standstill for a moment.

While no damage was sustained – other than to a set of tyres – it was the incident that dropped #95 out of victory contention. Marco and Maxime combined over the rest of the race to take 10th spot in both the Pro Cup and overall.

The sister #97 Vantage was entered – for the first time in 2022 – in the Silver Cup, having switched from the Gold Cup less than a week ahead of the event when Team Principal Andrew Howard’s business commitments left him unable to race.

David moved up seven places overall by the end of his first double-stint; the car lying 10th in class when Theo was fired off the track and into a race-ending incident against the Les Combes tyre barrier in the third hour.

The next round of the GT World Challenge Europe Endurance Cup takes place at Hockenheim, Germany on September 2-4.

Andrew Howard, Team Principal, said: “Firstly I want to say how proud I am of every member of the team, who gave everything they had and more at Spa. Fundamentally we didn’t have the pace in the car to win the race, but thanks to some incredible driving by Nicki, Marco and Maxime – who were right on the limit the whole way – and some exceptional decisions by the Beechdean AMR team with the strategy, we worked our way into the top three with a couple of hours to go. Ultimately Nicki had the spin as a result of the contact with the car that won. He could have backed out when the two cars were side-by-side, but we’d decided as a team that if we were going to have the best chance of a good result, we had to – as he says – ‘Go hard or go home’. We had to take risks and we’ll take the consequences on the chin when they don’t pay off. Spa is the ultimate 24-hour race and this year’s event was ferocious. All things considered, a top-10 finish – our best result of the year – feels like a success. A podium, honestly, would have felt like a win. We rolled the dice with both cars, but naturally I’m hugely disappointed for the crew of #97. This race chooses who wins and who crashes and it decided it wasn’t going to be the race for that car. David, Charlie and Roman were all new to the team for Spa and each one settled in brilliantly. Some of that was down to the work Valentin Hasse-Clot did with them, so he deserves praise for the way he dealt with having to step out of the car when we switched it to the Silver Cup late-on. There are two races left of the Endurance Cup so what we need to do now is to reflect on the performance of the Vantage GT3 within the current environment and make an assessment going forwards on what’s best for the team.”