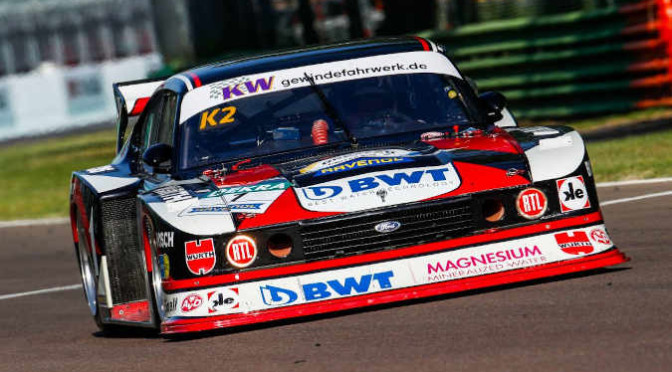 DTM Classic excites. Two new race series for former DTM classics and race cars from the Deutsche Rennsport-Meisterschaft (DRM) are thrilling the crowd. In the process, not only the extraordinary race cars from DTM and DTM are admired by the fans at the race track and in the paddock, but also the people who are driving these classics in a very spirited way, especially the professionals from days gone by.

When stars from the past like Stuck, Nissen, von Bayern, Manthey et al are sharing their entertaining stories during interview sessions, when people are still queueing up after an hour during an autograph session with DTM Classic guest Walter Röhrl, the fascination of DTM Classic is clear for everyone to notice. No surprise, therefore, that Peter Oberndorfer, a former DTM driver himself and responsible for the DTM Classic series management within the DTM organisation ITR, is happy for the beginning with the development of the two series DTM Classic Cup and DTM Classic DRM Cup, newly introduced at the beginning of the year

In August, both race series are presenting themselves at one of the world’s most fascinating race tracks, the Nürburgring: from 12 till 14 August, the DTM Classic Cup has a one-off event away from the DTM platform during the AvD Oldtimer Grand Prix while the DTM Classic DRM Cup will be racing during te DTM Nürburgring powered by Mercedes-AMG event from 26 till 28 August.

Historic motorsport enjoys increasing popularity. Therefore, the DTM organisation ITR came up with two in-house race series for the 2022 season, DTM Classic Cup, particularly for classic DTM cars from the years between 1984 and 2007, and the DTM Classic DRM Cup for cars from the Deutsche Rennsport-Meisterschaft from the 1970s. How were these two new race series by DTM Classic received in the community?

Peter Oberndorfer: “Especially concerning the DTM Cup, some people were skeptical at first. Finally, we were the third series in the scene. However, with the takeover and the integration of TWC, we were able to clean up the market again. On top of that, we only have five events, so there is still plenty of room for other races. With the DRM Cup, we have obviously found a market niche. Although the cars from the Rennsport-Meisterschaft are even older and rarer, we have nice grids. After all, there is no other platform specifically for these cars.”

The grids of both DTM Classic series convince with their quality right away and the number of cars is impressive, too. What do you think is the reason for this huge interest, what is characteristic for the series?

“I already mentioned the market niche concerning the DRM cars. It is simply nicer when these cars race in their own environment and are not packed into any other grids. It is actually logical that the classic DTM cars have found a good home at DTM. This is where they come from, this is where their history is. And in both series, this unique platform in DTM with a lot of atmosphere because of the many spectators, fascinating races with a lot of track time at interesting circuits and a professional live stream are appealing. Last but not least, we try to provide a weekend that is as attractive and as pleasant as possible for the participants. After all, for them, DTM Classic is particularly about fun and leisure.”

There are many enthusiastic lovers of classic race cars who prepare their cars themselves and race them as well. On the other hand, more and more specialists like BWT Mücke Classic, Schnitzer Classic or 2.0 Automotive are committed to the professional preparation of the historic race cars. What is the significance of this mix and which highlights could already be seen on track?

The market for such races is rather increasing and many owners want an optimal treatment. This is where the professional teams are coming in. These, in turn, are able to showcase themselves and their expertise at a high-quality platform and even benefit from synergies when, like Mücke Motorsport, they are also involved in DTM and DTM Trophy at the same time. Nevertheless, we can’t and definitely don’t want to do without any single one of the many privateers. They often find the most unbelievable cars and prepare them with remarkable commitment. For instance, two teams are bringing cars on the grid with us of which there are only two in the world.”

Not just the many fascinating race cars from the past 50 years are fascinating the crowd, but also the many professionals from days gone by. Even somebody like Walter Röhrl was present at Norisring and came to visit the Classic paddock. How important are drivers like Stuck, Nissen, von Bayern, Hessel, Manthey, Mücke for DTM Classic? Or guests like Walter Röhrl?

“As we can see from autograph sessions and interviews, the fans still love the drivers from back in the day and their many entertaining stories very much. They partly grew up together with them, these are the heroes of their youth. And when exceptional personalities like Walter Röhrl express their interest in DTM Classic, it is even better. At Norisring, we had to stop the autograph session with Walter after more than one hour, fans simply just didn’t stop showing up. Such experiences round out the DTM family event in the most beautiful way.”

In August, both DTM Classic series will present themselves at Nürburgring, the DTM Cup during the AvD Oldtimer Grand Prix and a fortnight later the DRM Cup during DTM Nürburgring powered by Mercedes-AMG. What is it that spectators can look forward to?

During the Oldtimer Grand Prix, we are expecting a field of over 30 cars of high quality in the DTM Classic Cup which will provide a lot of racing action in itself already. This was already partly unbelievable in the races we had so far, but this time, in Audi, BMW, Ford, Opel and Volvo, we will even have five brands up against each other. Of course, once again with the heroes from back in the day, but also with many very ambitious privateers who fight fierce battles with the ex-professionals. In the DTM Classic DRM Cup a fortnight later during the DTM race weekend, we will again see exquisite and rare cars like a Group 5-spec M1, an Alfa Romeo Montreal Group 4 or beautiful 911 RSRs on the grid. On top of that the already legendary Group 5 Capri but also BMW 2002 and CSL or Opel Commodore. At the Nürburgring, optical joy and sound are reaching a very special level on two occasions in August.”