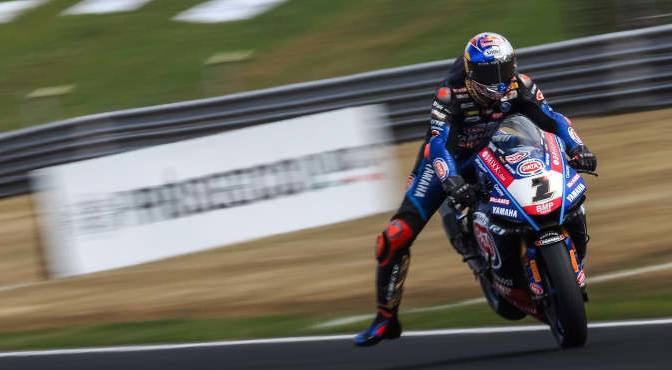 P1 – Toprak Razgatlioglu (Pata Yamaha with Brixx WorldSBK)
Razgatlioglu stormed to a new lap record in FP2 setting a 1’31.506.
Razgatlioglu’s race pace was pretty strong in the afternoon, as he set nine laps in the 1’32 bracket, whilst his final run featured three 1’31s.
“This morning we started well after Donington Park and the bike feels good immediately. In the first session there was some small setting problem, but in the second session we improve the bike, now I am feeling much better and we are ready to race. The lap time is very positive, a very good lap time and also after 25 laps with the rear tyre, I see 32.3 – this is very good for so many laps on this tyre! I am very happy and I set also the lap record with harder tyre! Anyway, we are just focused on the race setup. We use in the race the SC0 tyre, everyone uses the SC0 tyre. We are just focused on working on the bike, and now we are happy, and we are ready. For Superpole, we can use the SCX tyre, but I think this is enough for a good lap time.”

P2 – Scott Redding (BMW Motorrad WorldSBK Team)
Redding was second with a 1’31.733, 0.227s off Razgatlioglu’s best time.
The BMW rider set 12 laps in the 1’32, half of them in the lower bracket. He dipped into the 1’31s just once.
“I’m happy. Today I started good in the morning, I just used one tyre and we tried to get the feeling, we used the same setting from Donington for me to have at least the connection and the feeling with the bike. This worked really well so I’m happy. And then in the afternoon, we tried to improve a few areas which we did successfully. Temperature came up so it was a bit a different feeling with riding, but the pace was still there which was good. So overall I’m happy and feeling quite comfortable.”

P3 – Michael Ruben Rinaldi (Aruba.it Racing – Ducati)
Rinaldi finished third in the Free Practice combined result 0.314s.
He was the first Ducati rider on Friday finishing just 0.051s ahead of his teammate.
“This morning, I was immediately quite fast. I was a little bit surprised because it was a completely different track. But we were fast so I’m happy. The only issue we had was during FP1 & FP2, I lost a bit of time in the box to wait for a technical reason. This weekend we don’t have the SCX so to adapt in a good way, you need to stay out on track and work even more so I’m not so happy about it. Anyway, I’m third so I don’t want to be too negative because I feel fast. We just need to put every piece together.”

P4 – Alvaro Bautista (Aruba.it Racing – Ducati)
Bautista stands in fifth place at the end of Friday with a best time of 1’31.871.
He finished 0.365s behind Razgatlioglu for his first day at the Autodrom Most with Ducati.
“Today has been a day to discover the track with this bike. It was my first time with Ducati. In the morning we just made a lot of laps just to get the references and to see the tyre, especially the new compound that Pirelli brought here. I did a lot of laps and the feeling was not too bad, even if the bike was not as perfect as I wanted it to be. In the afternoon, we made some changes on the bike and we found some things better and something worst so we have to analyse the data and see what to use for tomorrow. The tyre selection is not clear. Nothing is clear because we found some positives and some negatives in each tyre. We have to check everything and, together with the bike, the way to go for the rest of the weekend. I think everybody’s in a very similar situation, so it won’t be easy for tomorrow or Sunday. The most important thing is to manage the tyres.”

P5 – Jonathan Rea (Kawasaki Racing Team WorldSBK)
Rea was fifth on the opening day of the 2022 Czech Round.
He set his personal best time of 1’31.893 in the morning session, being the only rider inside the top six who didn’t improve in FP2.
“The track was much better than last year, especially that first sector, first chicane. So, I had much more feedback, you can more ride closer to the limit. Just in the afternoon, we were trying to understand the tyre drop, how the tyre behaves when the tyre is old. I only putted a new tyre in the end. But just with the big changes on the bike … we have new items to check, and it wasn’t possible. We get a lot of information. I don’t think the position reflect our true potential. In an ideal world, if we didn’t have so many testing items, I would’ve tried the SCX tyre because that’s also important for us. It’s not an option for both long races but it is still an option for the 10-lap race. We focused on just the standard SC0 option and then the new prototype SC0, which is a different construction. We’re happy with how the day works. And looking forward to see what happen tomorrow, put all the items together and hopefully we can be competitive.”

P6 – Loris Baz (Bonovo Action BMW)
The BMW rider displayed a strong pace in the afternoon before clocking in a couple of low 1’32s
“The feeling was good from the first laps of FP1, I just had to find my pace. I’ve been here only once, and it wasn’t with Superbike. I was pretty happy to see that the updates BMW bring in Donington were working here as well. I was happy to see that the bike was behaving in a good way from the first laps. We had a lot of things to do, it seems like it’s going to rain tomorrow so we had try all the tyres and other things today. I wasn’t really fast in FP1, but we managed to improve every laps with the old tyre. We then had a pretty good FP2. We tried the SCX at the end just to see how it was. It wasn’t a perfect lap time but we’re on the good way and we just need to confirm tomorrow.”

To note:
Honda’s Xavi Vierge and Iker Lecuona, who had never visited the track before, finished in 10th and 11th place. A big crash at Turn 6 at the start of FP2, Lecuona didn’t get back out, losing vital track time on his Most debut. The Spaniard will need to get a medical check before FP3 as he suffered lower back contusions.