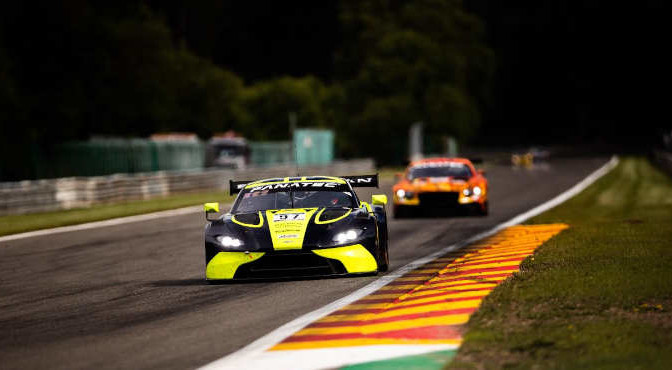 Beechdean AMR heads into this week’s Fanatec GT World Challenge Europe Powered by AWS Endurance Cup headline event, the 24 Hours of Spa, with a revised driver line-up and renewed hopes for success at the legendary event.

Due to increased work commitments within Beechdean’s core business, Team Principal Andrew Howard has made the difficult choice to step back from driving duties aboard the #97 Aston Martin Vantage GT3 for Spa.

The two-time British GT Champion’s decision means #97 will switch classes from the Gold Cup into the Silver Cup.

This unfortunately also means that Aston Martin works driver Valentin Hasse-Clot – the car’s designated Gold driver – is also forced step aside for Spa, though both he and Andrew will be on-site to support the team as it aims for success in two classes.

David, 30, races an Aston Martin in the FIA World Endurance Championship this year and currently lies second in the GTE Am points following victory at the opening race of the year and two further podiums.

A former champion in the Nurburgring-based NLS endurance series, he is also a race winner in the British GT Championship and at the Spa Six-Hour event for historic racing cars and a podium finisher in the Interncontinental GT Challenge.

Charlie, who is also racing an Aston Martin in the WEC this year, was the GT4 European Series Silver Cup Champion in 2021 and has also been a race winner in ADAC GT4 and the British GT Championship.

The 22-year-old from Durham will make not only his 24H Spa debut, but also his first appearance in the GT World Challenge Europe.

The team’s Pro entry, the #95 Vantage will, as usual, bid for outright success in the hands of home hero Maxime Martin, Nicki Thiim and Marco Sorensen.

The 24 Hours of Spa is the biggest GT3 race in the world and the most prestigious round of the GT World Challenge Europe Endurance Cup with 65 cars entered across four classes. Beechdean AMR aim to give Aston Martin its first outright success at the race since 1948.

Andrew Howard, Team Principal, said: “The balance of the ice cream business and motorsport has always worked well, but with the ever-increasing pressures on food manufacturers in the UK, it’s important that I put our core business at the top of my priority list. This, unfortunately means, that I cannot put 100 per cent focus on racing at Spa and having done the race a few times before, I know this is not a race you can do unless you are fully committed. Rather than compromise the team in any way, I’ve taken the difficult decision to step back from driving duties for the race. Because of this, we’ve decided to switch to the Silver Cup with two fantastically talented team newcomers in David Pittard and Charlie Fagg. While this means that unfortunately Valentin – as a Gold driver – also has to step aside for this race, I have to thank him for taking the news as the true professional he is. Both Valentin and myself will be on-site for the race and plan to be cheering on a double win for the team.”

Charlie Fagg said: “I was supposed to be going to Spa as a driver coach, but to get the call on Friday to ask me to race was a brilliant surprise and not something I was expecting. It’s a shame that Andrew and Valentin have had to step out of the car for the weekend, but it’s given me the chance to make my GT World Challenge Europe debut in a car that should be able to compete for the class win, which is something I’m very excited about. I’ve never driven the Vantage GT3, but I’ve raced the GTE version this year in the World Endurance Championship and if it’s similar, it’s going to be great. There’s a lot to learn, but with an excellent set of team-mates in #97 and the Pros in #95 – including Marco Sorensen, who’s one of my WEC team-mates and has been like a big brother – to help push us on, I’m confident we can do well if we can have a clean race.”

David Pittard said: “It was great to get the late call to a team that’s not just here to make up the numbers, Andrew has assembled a top group of drivers in a car that should be a contender for the class win. I was at the 24H Spa official test and got to see Theo and Roman in the Vantage and both were very impressive. Theo’s knowledge of the new-for-2022 Pirelli tyre on the car will be a huge help to all of us and I’d like to think that my experience of having done this race three times will benefit Theo, Roman and Charlie in terms of how we manage the weekend as a team. I live halfway between Spa and the Nurburgring so I’m getting used to working out the weather patterns – and I’ve probably driven Spa in every possible set of conditions – so that should help too. I think Beechdean AMR has all the right ingredients for a top result at Spa. Youth and experience on the track, cool heads in the pits, and cool ice cream in the fridge.”