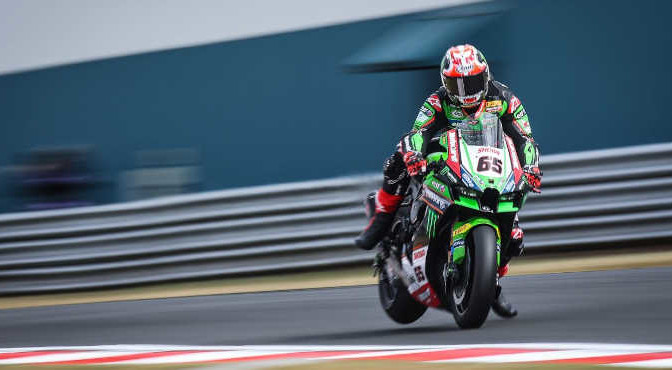 The six-time WorldSBK Champion led Razgatlioglu and Redding in the combined results, with Bautista in fifth
Friday highlights – WorldSBK

P1 – Jonathan Rea (Kawasaki Racing Team WorldSBK)
Rea topped Friday’s timesheets, finishing 0.551s clear of Razgatlioglu.
His fastest time of a 1’27.016s is under the race lap record.
He set an incredible 13 1’27s, more than the total of his competitors combined.
“You never expect such a big difference because half a second is a lot. During practice sessions, everyone is in different strategies. Today I tried to understand a couple of different weight balances with the bike, different wheel basis, some different electronic settings and then try to evaluate both front tyres and also all the rear tyres. We managed to do all that. This morning with the harder rear option, and this afternoon with both the softer options. We gained a lot of information today, now it’s about sitting down understanding what’s going to work for tomorrow. Just looking at the forecast, the temperatures are going to rise so maybe all that work would be in vain because when you have a 10 degrees difference on the asphalt it makes a big difference. The positive thing is that we have lot of info and today we were quite fast. So, it’s a good start to the weekend.”

P2 – Toprak Razgatlioglu (Pata Yamaha with Brixx WorldSBK)
Fastest in FP1, Razgatlioglu concluded Friday in second place about half a second behind Rea.
Not matching Rea’s pace, he lapped two 1’27s and ten 1’28s.
“I’m very happy that we come back again to Donington Park, because I like this track a lot. Today we try for a good setup for the race, but we have to keep working because in FP2 I am not really happy – but P2 was not a bad lap time. We need more grip for the rear and after, I’m just riding because you know I enjoy this track! We will try also a new set-up, we will see. This is just the first day, tomorrow we have FP3 and after we will try again a good set-up for the race. Every race weekend this year we see big improvement, everybody is very fast. Important the race, not Friday – so we are just working for this and I hope tomorrow I am fighting for the victory.”

P3 – Scott Redding (BMW Motorrad WorldSBK Team)
With a new swingarm at his disposal, Redding completed Friday’s top three after two solid Free Practice sessions.
He finished 0.582s behind Rea’s best time, and 0.031s behind Razgatlioglu in second.
“I think we’ve also made some big steps with the BMW to bring it closer to the front. Different handlebars, different swingarm, different footpegs, I’m just feeling more that it’s my bike and riding with more of a clear mind of how to go fast. It’s definitely an improvement, that’s for sure. But it’s still the start of the evolution for me. I’ve worked with Kalex before; they’re very good technically and a very good way of achieving the goal and they understand that from a rider’s perspective. There will be more to come, which is very good. It’s just part of the puzzle. We have many, many things that we are pushing and working on. Slowly we start to see something coming.”

P4 – Alex Lowes (Kawasaki Racing Team WorldSBK)
Lowes ended Friday in fourth place with a best time of 1’27.684s, having run second for most of the session and staying out on one tyre.
“It was a good Friday. It was really nice to get on the bike. I was a little bit nervous this week because it’s a real home race for me. It’s a track I enjoyed and to be honest I felt really good on the bike today. In FP1, I tried my 2022 standard setting and also somethings to watch of the years at Donington last year. In the afternoon, I tried to do a longer run with the SCX tyre just to gather some information for Race 1 tomorrow. I’ve felt quite good. There are some areas in the middle of the lap, the second sector, where I need to improve but in general, I was quite happy.”

P5 – Alvaro Bautista (Aruba.it Racing – Ducati)
Championship leader Bautista was fifth, as his best time of 1’27.730 is 0.714s slower than Rea’s time.
He lapped three 1’27s accompanied by 14 1’28s showing signs of good pace.
“I think today has been a positive day. I felt better than I expected; I didn’t expect anything before coming here because I remember three years ago, it was very tough for me. Today, I was feeling much better. The feeling with the bike wasn’t too bad especially with the race pace because I felt quite comfortable compared to three years. I think our pace today was acceptable. Anyway, we have some small details to improve for tomorrow that maybe can help me gain some tenths and especially be more consistent. I’m happy with today.”

P6 – Michael Ruben Rinaldi (Aruba.it Racing – Ducati)
Despite a small crash at Turn 12 in FP2, Rinaldi completed Friday’s top six.
Just 0.005s separated him from his teammate in fifth.
“We used the base from Misano, and it worked really well here. I didn’t expect that. I spoke with the team to just make small adjustments and it paid off because, in FP2, I had a good race pace and consistent. This track is so demanding but with this setup and this work I can go fast every lap, so that means the base is really good. We still need a little bit. I think are on the path to try and fight for the podium, which is our goal.”

To note:
Loris Baz (Bonovo Action BMW) was seventh, with the French rider also having a new swingarm on his BMW M1000RR.