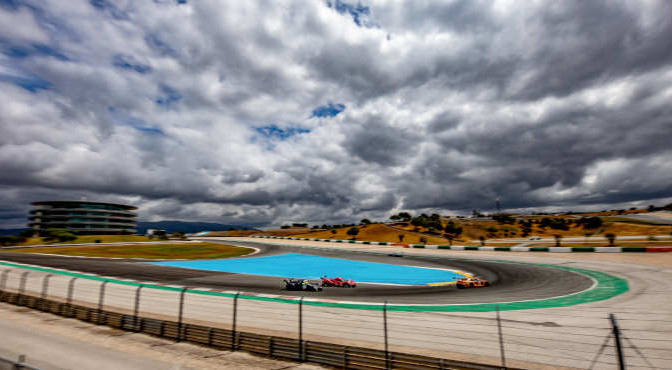 On 8-9-10 July, and after a one-year break, the 24H SERIES powered by Hankook returns to the Autódromo Internacional do Algarve in Portugal for the fifth edition of the Hankook 24H PORTIMAO.

CREVENTIC’s second, full 24-hour endurance event of the season has rapidly become one of the Dutch promoter’s most personable races since the inaugural running in 2017, courtesy of the fast yet technical nature of the home of the Formula 1 Portuguese Grand Prix as well as the enviable Algarve climate. Indeed, with just under two weeks to go before the green flag drops, teams and competitors representing 17 different nationalities across three continents have already been registered.

Ole Dörlemann sporting coordinator: “The Hankook 24H PORTIMAO is always one of the most significant events on the 24H SERIES calendar. Every year since its inaugural edition, this race offers a challenge to our competitors like few others you can find in Europe, and it has always played a significant role in both the Championship of the Continents and the European title chase. We’re expecting much the same this year and are looking forward to another successful weekend of endurance racing.”

Already a two-time race winner in 2022, Phoenix Racing (#18), which currently leads the GT3 Teams’ European standings, will surely be hoping to earn its hattrick in Portugal with its Audi R8 LMS. The German team reunites Elia Erhart, Pierre Kaffer, and Michael Doppelmayr – the trio that currently leads the GT3 Drivers’ European title chase – with the returning Swen Herberger, who joined his Phoenix Racing teammates on the podium in Mugello and at the Hockenheimring.

Nearest championship rival CP Racing (#85) will once again run series staples Charles Putman, Charles Espenlaub, Joe Foster and Shane Lewis aboard the Mercedes-AMG GT3 Evo at the Autódromo. Alongside their 2017 ‘SP2’ class win, Putman, Espenlaub and Foster took class victory at the event in 2018 en-route to their Overall GT Drivers championships, while GT3-AM Teams’ standings leader CP Racing is also on a roll following its 2nd place overall at Spa-Francorchamps.

Reigning GT3-AM Teams’ champion Herberth Motorsport (#91) meanwhile, which won the Hankook 24H PORTIMAO outright in 2020 (becoming the first non-Ferrari team to do so), has registered its Porsche 911 GT3 R for team principals Alfred and Robert Renauer, and series staples Daniel Allemann and Ralf Bohn. The quartet will be joined Jürgen Häring, who was also part of Herberth’s Portimão-winning line-up in 2020.

The returning WTM Racing (#22) has likewise enjoyed enormous success at the Hankook 24H PORTIMAO over the years, the German team having twice finished on the outright podium at the event in 2017 and 2019. The Ferrari 488 GT3 will be driven by Weiss father and son Georg and Leonard, Jochen Krumbach and Daniel Keilwitz, all of whom most finished 3rd overall at the recent Hankook 12H SPA-FRANCORCHAMPS. The quartet will be joined by Indy Dontje, back for his first 24H SERIES outing since finishing 5th overall at the season-opener in Dubai.

SAINTéLOC Racing (#26) completes the GT3 line-up thus far. Following a frustrating end to its race at Spa-Francorchamps, the French team will be hoping to secure its first category podium in the 24H SERIES in Portugal with its Audi R8 LMS GT3 EVO II, set to be driven by Olivier Esteves, Pierre-Yves Paque, Christian Kelders and Simon Gachet.

Currently at the head of both the 922 ranks in the European standings and the Championship of the Continents, Red Camel-Jordans.nl (#909) will team father-sons trio Ivo, Rik and Luc Breukers with 2019 Overall TCE Drivers’ ‘Continents’ champion Fabian Danz for the first time.

Similarly, father and sons Bert, Yannick and Ayrton Redant will once again pilot the #903 Red Ant Racing Porsche in Portugal in an effort to close their seven-point deficit to Red Camel-Jordans.nl in the European standings. The trio will be joined for the twice-round-the-clock event in the Algarve by former Formula E reserve Sam Dejonghe, who most recently drove the Belgian team’s sister Porsche 992 GT3 Cup at Hockenheim.

The #904 Red Ant Racing Porsche meanwhile, which is just three points adrift in the Championship of the Continents, will feature season regular Philippe Wils and the returning Jimmy and Kobe de Breucker on driver detail, the latter two in their first 24H SERIES showing since last year’s Hankook 24H DUBAI.

ID Racing (#977) completes the 992 line-up thus far, and is set to make its first start since the non-championship Hankook 6H ABU DHABI in January.

In the European standings, Leipert Motorsport (#701) and RD Signs – Siauliai Racing Team (#720), both of which have entered a Lamborghini Huracán Super Trofeo Evo for Portimão, are currently equal on points, with Vortex V8 (#701) just a single point further back.

Lithuanian compatriots Paulius Paskevicius and Audrius Butkevicius continue their full 2022 campaign with Nicola Michelon at the Hankook 24H PORTIMAO, while Austria’s Arturs Batraks returns to RD Signs for his first start since the 2020 Hankook 12H MUGELLO.

Kerong Li and Jean-Francois Brunot, who currently lead the GTX Drivers’ title chase in the European standings, are reunited with Tyler Cooke for the young American’s second race in the Leipert Lamborghini this season. Anthony McIntosh and Glenn McGee meanwhile are set to make their 24H SERIES debuts with the 2019 Overall GT Teams’ ‘Continents’ champion.

Though Leipert Motorsport currently leads the GTX Teams’ standings in the Championship of the Continents as well, Vortex V8’s Philippe Bonnel, Sebastien Lajoux and Lionel Amrouche will hope to strengthen their lead in the GTX Drivers’ title chase in Portugal.

Finally, a pre-production example of BMW’s second generation M4 GT4 will make its endurance racing debut at the Hankook 24H PORTIMAO under the ‘BMW M Motorsport’ banner (#482). Max Hesse and Neil Verhagen – both of whom competed at last year’s Hankook 24H SEBRING – will be joined in the ‘GT4 Concept’ by fellow BMW Junior driver Daniel Harper and three-time VLN champion Dirk Adorf.

RAM Racing (#405) is set to make its GT4 category debut with a Mercedes-AMG GT4 at the Hankook 24H PORTIMAO, marking the British team’s first series outing since the Hankook 24H BARCELONA in 2018. Prolific historics racer Katarina Kyvalova will compete with Jon Mishaw on their first series start since Dubai in 2020, the duo set to be joined by British GT Championship frontrunners Phil Keen and 24H SERIES regular John Loggie.

After a one-round hiatus, Team ACP – Tangerine Associates (#421) will look to strengthen its lead in the GT4 class European standings with a third win of the 2022 season. Catesby Jones and Wim Spinoy, who jointly lead the GT4 Drivers’ standings, will pilot the BMW M4 GT4 with American compatriots Ken Goldberg and Jim Norman, the latter two back for their first series start since last year’s Hankook 24H SEBRING.

Chariya Nuya meanwhile, which currently leads the TCR Drivers’ ranks in the European standings with the Kusiri brothers, will compete in BBR’s sister #158 CUPRA TCR with Munkong Sathienthirakul (all four took TCR victory at Spa in April), Sandy Kraokaew, Grant Supaphongs and Nattanid Leewattanavalagul. The latter three are set to make their 24H SERIES debut.

The Lestrup Racing Team (#110) continues its 24H SERIES return with the tenured Volkswagen Golf GTI in the Algarve. Swedish compatriots Mats Olsson, Peter Fahlström, Stefan Nilsson, all of whom finished 4th in-class last time out at Hockenheim, will be joined for the first time by series newcomer Patric Olovsson.

The returning 700 Miles (#106), which last competed as ‘CODE Racing Development’ at the 2020 Hankook 24H PORTIMAO, will also run a Volkswagen Golf in Portugal, with Thierry Chkondali, Marc Girard, Bruno Derossi, and Jordan Mougenot on driver detail.

The returning Viper Niza Racing (#165) completes the TCR line-up thus far, having registered a CUPRA TCR for Douglas Khoo, Dominic Ang, Gilbert Ang, and Melvin Moh for its first start since the TCR SPA 500 in 2019.

Following two unofficial private tests on Thursday 7 July, the first of three, one-hour Free Practice sessions for the 2022 Hankook 24H PORTIMAO gets underway at 10.50 hrs local time on Friday 8 July. These will be followed by Qualifying for both the GT and TCE divisions later that afternoon from 16.50 hrs, and 90 minutes of Night Practice from 20.30 hrs.

The green flag for the race proper will fly at 14.00 hrs on Saturday 9 July, and the event is set to continue uninterrupted throughout the night until the chequered flag brings the race to a close on Sunday 10 July.

Live coverage of the Qualifying, Night Practice and the race itself will be available via the official 24H SERIES YouTube channel and across all social channels, with live commentary to be provided by radiolemans.com. Further details regarding the 2022 24H SERIES calendar and championship standings can be found at www.24hseries.com