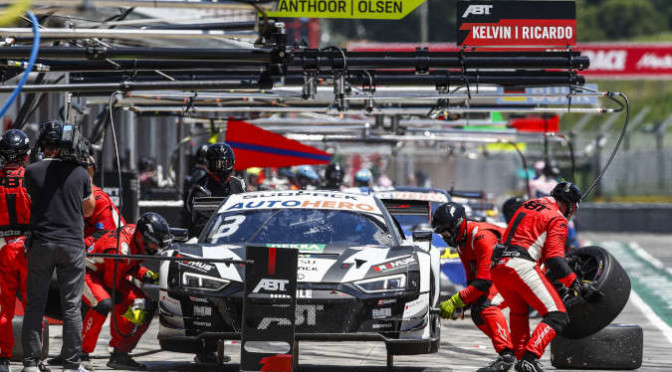 The Norisring race weekend is coming up this week (Saturday and Sunday, both live on ProSieben from 1 PM CEST). It is the highlight of the DTM season and the home race of ABT Sportsline. The Bavarian team has already celebrated highly emotional victories in the DTM on the short 2.3-kilometre street circuit at the Dutzendteich in Nuremberg, but has also shed a tear or two. Team Principal and CEO Thomas Biermaier looks back on the history.

What can the DTM fans look forward to at the Norisring weekend?
A pure motorsport festival. What the ITR has put together with all of the other series is worthy of all honour. According to the weather forecast, we’re in for a hot weekend. With all the concrete, the Norisring will be like an oven. There could also be thunder and lightning. We’ve experienced just about everything at the Norisring. I’m looking forward to great races, lots of excitement and hopefully a home victory for ABT Sportsline.

There will be split qualifying sessions with two groups for the first time – is this a good idea?
I think it makes perfect sense with so many cars on the short track. It’s fairer for everyone, otherwise we’d have a big problem with “blocking”.

The Norisring is a home race for ABT Sportsline and Audi. Is there also a home advantage?
Not really. There were many years when ABT and Audi didn’t win anything at the Norisring, even though we were almost always up front. But there are also many Norisring moments that we look back on with pleasure. When I think of our first victory in 2002 with Laurent Aiello, I still get goose bumps. After last year, we have something to make up for at the Norisring. We are looking forward to it.

A new book about the 22 years of ABT Sportsline in the DTM will be published at the Norisring and distributed to friends of the company and partners. Which Norisring stories do you remember most fondly, and which ones not so much?
The absolute highlight was the race in 2002, wherein we fought for 72 laps with Bernd Schneider, the most successful DTM driver of all time. Laurent Aiello overtook him in the last corner and clinched the victory. A particularly nice moment was also in 2013, when Mattias Ekström crossed the finish line as the Norisring winner. We celebrated that exuberantly in parc-fermé. A few hours later, it turned into the most bitter moment with the disqualification due to the water bottle affair.

Back to the current season: What is your overall impression of the DTM 2022 shortly before the end of the first half of the season?
Everything is very close together. You have to work on every little detail to be at the front. We have great drivers, good teams and many manufacturers. The races could be a bit more exciting now and then. But that’s a bit due to the fact that we have a relatively good Balance of Performance and many extremely good drivers. Overtaking is simply difficult, but I’m sure that we’ll see a lot of action and interesting races, not only at the Norisring.

How important were the first two DTM wins of the season for the whole team in Imola?
Very important! I think it was a load off everyone’s mind in the team. But even more important is the fact that we now have a super basis and a good direction for the next races.

Did the team find the changeover to the evo II version of the Audi R8 LMS GT3 more difficult than expected?
We had a set-up philosophy last year with which we were fast. For the new evo package, that didn’t fit one hundred per cent anymore. It took some time to get the optimum out of it. I think we have found the right mixture now.

Did you expect René Rast to be back on top of the podium so quickly in his first DTM season with the GT3 cars?
To be completely honest: no! But, of course, I had hoped that he would be. We know that he is one of the best racing drivers in the world. It deserves the utmost respect that he has made the transition so quickly. You can see once again that all the hard work he, but also his engineer Felix (Fechner) and the whole team are doing, is paying off. The success does not come by chance.

Ricardo Feller has also already won his first DTM race – at his third weekend in the DTM and shortly after his 22nd birthday. How does he fit into the team?
Absolutely super! I am very happy with him – with the way he works and with his character. He fits in perfectly with the team. And he is also showing how fast he is in the DTM. He had a lot of bad luck in the first races, including two punctures. If it was not for that, he would already be right up there in the title fight.

Kelvin van der Linde had a difficult start to the year after his strong 2021 season. How can the team help him to get back up to the front?
It can only be done together and with a certain amount of ease. You can’t always react immediately to external criticism. We just have to stay cool and work hard. Everyone here has one hundred per cent confidence in Kelvin. We know that he is one of the fastest GT3 drivers in the world. He will show that again soon.

After the Norisring, the DTM takes a summer break, but the team probably won’t get bored with all of the other motorsport projects at ABT Sportsline?
That’s right. After the Norisring, it’s straight to Sardinia with Extreme E. ABT and Extreme E don’t quite fit together yet – in terms of race results. It’s time to change that. Last year, we finished second in Sardinia. Maybe we’ll also manage a podium this time. We are definitely working hard for it. We are in a very intensive phase with the preparation of our Formula E comeback. The team for 2023 is largely in place, but there is still a lot of work ahead of us.

ABT Sportsline doesn’t just do motorsport, of course. Kelvin van der Linde travelled to Imola with an ABT RS6-S and was very taken with the vehicle. How much motorsport is there in the refined vehicles from ABT Sportsline?
Relatively little in terms of hardware. If you think in terms of emotions and expertise, then there is a lot. For us, “from the racetrack to the road” has been taken literally for almost 50 years. That is the DNA of ABT Sportsline. And of course, our engineers from the racing world are always exchanging ideas with their colleagues from the tuning world. Our aim is to get the best out of every vehicle – on the racetrack as well as on the road. The input of our racing engineers and also our racing drivers is very helpful here.

How is business at ABT Sportsline going overall? Times are not the easiest …
We are very satisfied. We have great products at ABT Sportsline and a great spirit in the whole team, thanks to which we had two very good years, despite Corona. The cooperation between the departments during the Corona pandemic was exemplary. Everyone really gave their all to defy this crisis. We really can’t complain. There are a lot of bad things happening in the world right now. When we complain, we complain at a very high level.

Quotes before the DTM races at the Norisring

Thomas Biermaier (Team Principal): “The two wins at Imola were very good for the whole team. Unfortunately, there was no time to celebrate – we’ll make up for that on Sunday evening at the Norisring, regardless of the outcome of the races there. Last year, the track suited the R8. That’s why I also expect us to be competitive this time. A home victory at the Norisring would definitely be something very special. We expect a lot of fans and friends of ABT to be keeping their fingers crossed for us. I’m really looking forward to our DTM home race and a pure motorsport festival.”

Kelvin van der Linde (ABT Audi R8 LMS GT3 evo II #3): “We still have some work to do to get back to where we were last year. I’m sure we can do it before the end of the season – preferably already at the Norisring. Our home race would be a good place to finally start the season properly. Audi always does well there.”

Ricardo Feller (ABT Audi R8 LMS GT3 evo II #7): “This will be my first time at the Norisring and I’m really looking forward to the weekend. It’s difficult for me to assess it, because I don’t know the track. It’s very short and you think it’s easy, but I think it’s a tough one though. Normally tracks where you can’t make any mistakes suite me.”

René Rast (ABT Audi R8 LMS GT3 evo II #33): “The DTM fans can look forward to a big spectacle. The Norisring is always the highlight of the year: lots of spectators, a great track, lots of cars and, for the first time, two qualifying groups. You have to see which cars will be strong there. I have many good and positive memories of the Norisring and hope it stays that way …”

… football coach Felix Magath will visit the ABT Sportsline team at the Norisring on Saturday?

… ABT Sportsline won at the Norisring for the first time exactly 20 years ago with Laurent Aiello?

… ABT Sportsline won both Norisring races in the 2016 season with Edoardo Mortara on Saturday and with Nico Müller on Sunday?

… the South African, who lives near Kempten, received an air purifier from ABT partner HYLA at Imola?

… two winners of Antenne Bayern’s “Money can’t buy” campaign will be guests at the Norisring and will also be able to watch Saturday’s qualifying session from ABT Sportsline’s pit stand?

… Ricardo Feller was already back in the cockpit of an Audi R8 LMS two days after his victory at Imola during testing for the Spa 24 Hours?

… René Rast contested an NLS race at the Nürburgring for ABT partner Scherer Sport last Saturday, celebrating his first victory in the NLS?

… Kelvin van der Linde visited the Goodwood Festival of Speed and spotted his winning car from the 24-hour race at the Nürburgring?

… all three ABT drivers, Hans-Jürgen Abt, Thomas Biermaier and ABT’s Head of Sports Marketing Harry Unflath will be guests at the MotorsportLounge of B&M Marketing at the Norisring on Friday evening?

… Jürgen Tap from the agency Hoch Zwei has already won the ABT DTM Photo Challenge twice?

… not only professional photographers, but also fans can take part in the Photo Challenge?

… at the Norisring weekend, there will be a prize of a hand-held hoover from ABT and HYLA and an ABT chronograph, as well as the new hot-off-the-press ABT book “Wir sind DTM” (We are DTM)?