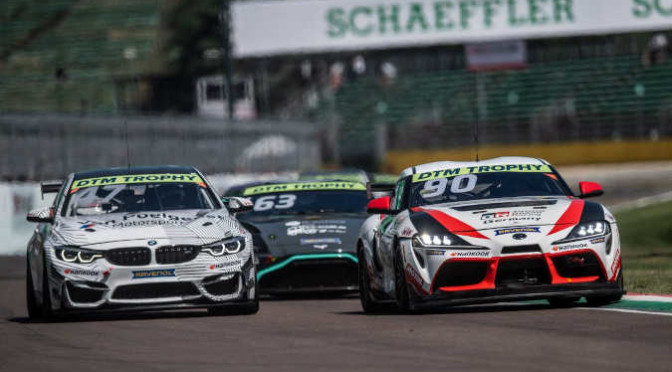 Two drivers tied in the lead of the standings is a clear proof once again how hard-fought the DTM Trophy is. And that the youngsters – participating in the talent pool on the DTM platform is allowed at the age of 16 already – with lap times of 53 seconds around the 2.3 kilometres long Norisring are just as fast as the 1993 DTM champion Nicola Larini during his two wins at the venue with the Class 1 Alfa Romeo 155 V6 TI underlines the challenge and the potential of the production-based GT sports cars. Going into the fifth and sixth race of the season at DTM Norisring powered by BMW M at the long-standing Nuremberg street circuit, Colin Caresani, a double race winner at Imola, and Tim Heinemann, who won both races at Lausitzring, are tied on points in the lead of the DTM Trophy drivers’ standings.

“To be successful at Norisring, you need to be dealing with the limits of the track in an open, precise and respectful way,” rookie Caresani is well aware of what matters in the Franconian metropolis. The Dutchman got his first experience in October 2021 in the BMW M2 Cup that will again be racing at Norisring this year, scoring a pair of fourth places right away. “Norisring is completely different from any other circuit, you never brake or position yourself in the way you would normally do. The bumps are changing everything. And when you exceed the limits, you are done.”

With his experience, Caresani, who is racing a BMW M4 from the Project 1 team, has an advantage compared to Tim Heinemann with the Toyota Supra (Toyota Gazoo Racing Germany powered by Ring-Racing). The 20-year-old from Fichtenberg became the inaugural DTM Trophy champion in 2020 and also participated in some races in 2021, but never raced at Norisring before. “Norisring simply has a great racing history. Sadly, I have never been there before, I always just watched it on TV, but even like that, the atmosphere was always special.” Heinemann is certain: “It will surely be tough and close.”

Behind Caresani and Heinemann, both at 69 points, 17-year-old Theo Oeverhaus (GER, Walkenhorst BMW) is third with 42 points, followed by six newcomers, spearheaded by Jacob Riegel (GER, 40), who shone with a pair of second-place finishes with the Speed Monkeys Aston Martin at Imola most recently.

Aston Martin, Audi, BMW, Mercedes-AMG, Porsche and Toyota – six manufacturers ensure a colourful brand mix in DTM Trophy. The performance and speed of the race cars are impressive. For instance, in 2021, three drivers posted lap times of 53 seconds in various sessions during the final weekend at Norisring. How fast the DTM Trophy race cars are, becomes clear by a comparison to 1993: back then, Italian Nicola Larini also posted 53-second lap times during his two DTM race wins at Norisring with the over 500 hp strong Alfa Romeo 155 V6 TI with four-wheel drive. DTM cracked the 50-second barrier for the first time in 1996 (Uwe Alzen, Opel Calibra V6).

“This comparison shows the performance our young drivers deliver in DTM Trophy these days and which level the production-based GT sports cars have. DTM Trophy is a perfect preparation for the step up into DTM,” says ex-DTM champion Martin Tomczyk, who is also responsible for the DTM Trophy series’ management as the DTM representative brand & sport of the DTM organisation ITR.

Due to a clashing race event for driver Alexandre Papadopulos, Belgian outfit Selleslagh Racing Team (SRT) will be absent from both races at Norisring.

The two DTM Trophy races start on Saturday and Sunday each time after the DTM races at 3.15pm CEST. All practice sessions and the races can be watched live at DTM Grid (grid.dtm.com), also taped-delayed on TV on ServusTV.