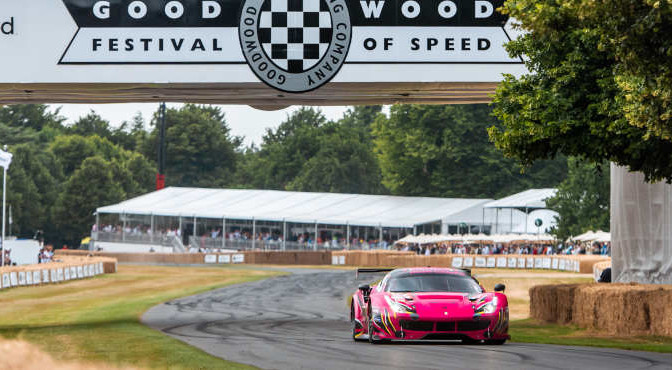 Fresh from their thrilling comeback drive at the 24 Hours of Le Mans just two weeks ago, the trio of Sarah, Michelle and Rahel appeared at Goodwood House in West Sussex, UK for the very first time to take on the 1.86km Hillclimb.

Representing the Iron Dames, the team not only raised the profile of the all-female team, but also shone a light on female inclusivity in motorsport to the thousands of fans that attended the world-renowned motoring event.

Over In Zandvoort for the ADAC Formula 4 Championship action, and Maya Weug scored a top ten finish on the tricky and undulating circuit, once again showing her credentials and continued surge in performance win 2022.

Race one resulted in a weekend’s best ninth-place finish for the Iron Dame after an engaging fight in the midfield that showed some impressive race craft from the Belgian-Dutch-Spanish racer.

On to race two, and it was another strong performance, finishing in eleventh and gaining two places from the start. The highlight for Maya was her remarkable overtake at the highly banked Hugenholtz hairpin in the latter stages of the race as she surged forward.

However, the weekend came to an unfortunate end on the first lap of race three, with Maya being collected and losing her front wing as the field was settling down, sadly not allowing the Ferrari Driver Academy racer to continue.

Iron Lynx’s Team Principal, Andrea Piccini, said: “This has been an incredibly special weekend for everyone at the team. Being able to attend such a prestigious event here at Goodwood in front of all the fans was a phenomenal experience.

“Sarah, Michelle, and Rahel all arrived in strong spirits and really enjoyed taking part in all the activities throughout the four days. The team was able to be more relaxed as we were not chasing times, and it was great to interact with the fans up close.

“Many people stopped by our garage to look at the Iron Dames car, and it proves that the message of female inclusion in motorsport is really beginning to make a positive effect on the motorsport community.

“Overall, Maya had a good weekend at Zandvoort, showing determination in her battles and keeping pace with her competitors. She drove very well in race one and two, gaining places and showing more experience in her race craft. Race three was unfortunate with the lap one incident, but we are making progress and now we focus fully on the Italian F4 Championship at Vallelunga next weekend.”