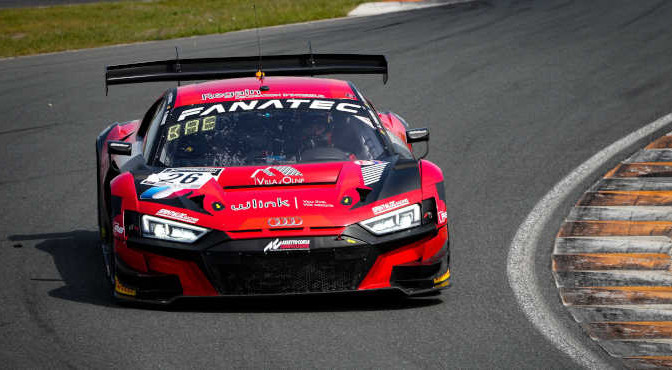 Pursued by bad luck, Nicolas Baert and his team mate Gilles Magnus managed to limit the damage with a 6th and a 4th place in the Silver Cup on the Zandvoort Circuit, where the third round of the Sprint Cup of the Fanatec GT World Challenge Europe was held.

Those who are well acquainted with him know that Nicolas Baert is an eternal optimist. On Sunday evening, however, the young man from Waterloo could not hide his frustration after the third round of the Sprint Cup of the Fanatec GT World Challenge Europe.

“I do not like to talk about luck or misfortune, but I feel as if fate was against our Audi at Zandvoort,” he sighed. “On Saturday my team-mate Gilles Magnus had us well placed among the Silver Cup cars in qualifying. Unfortunately one of our mechanics forgot the compressed air bottle – which is used to raise the car on the air jacks – when leaving the starting grid. This resulted in a drive-through penalty which forced us to go through the pit lane. From that point on, our hopes of a podium finish were gone and we had to settle for 6th place in the Silver Cup.”

The interest of the Fanatec GT Sprint Cup is in particular to have two separate race days. On Sunday morning, it was Nicolas’ turn to take part in the qualifying session in the Audi R8 LMS GT3 Evo II of Saintéloc Racing. “And then it was almost as if like the sky fell in,” he says with a nervous laugh. “In fact, on my first flying lap, a seagull flew into my windscreen. Not only did it feel strange, but the impact was violent and it knocked off my rear view mirror. It was hanging by a thread and I had to enter the pit lane… By the time it had been repaired, I had started again with new tyres and I was then interrupted by a red flag. At the very end of the session I was able to do one lap, but with tyres that were not yet at the right temperature. As a result I ended up in 23rd position on the grid, only 7th in the Silver Cup. It is frustrating, because I know I could have done much better!”

In the race, Nicolas completed a good first stint and, thanks to the very good strategy of the Saintéloc team, the duo he forms with Gilles Magnus had gained several positions by the end of the 60-minute race. “We finished 11th overall and 4th in the Silver Cup, half a second off the podium in the category,” explains the 20-year-old Belgian. “It is hard to do better in the circumstances!”

If there was a mixture of frustration and satisfaction at not having given up anything, Nicolas nevertheless found his eternal optimistic spirit. “It has always been very clear that this year is for learning,” he recalls. “From that point of view, the deal has been done! Every weekend I learn more about this Audi R8 LMS GT3 Evo II, about working with a team mate, about working with the engineers, about managing a weekend… This time we have learned to deal with the unexpected! It is all part of the process.”

For Nicolas, the next few days will be very busy. On Tuesday and Wednesday he will be at Spa-Francorchamps for the official test days for the TotalEnergies 24 Hours of Spa. Then, from the 1 to 3 July, the driver wearing the colours of Comtoyou and Villa d’Olne will be at Misano for the fourth round of the Sprint Cup. “As Gilles will be involved in an FIA WTCR event, I will have another team mate in Italy,” he explains. “But I cannot tell you just yet who the driver will be. In the meantime, I will be heading to Spa-Francorchamps, one of my favourite circuits.”