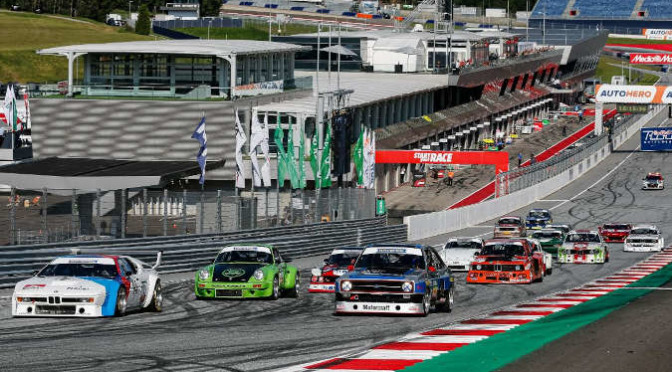 Renaissance of the Deutschen Rennsport-Meisterschaft: the touring cars and GT sports cars from the 1970s are making their comeback at the race track in the newly created DTM Classic DRM Cup. During this weekend’s premiere (17 till 19 June) at the Autodromo Enzo e Dino Ferrari, 24 classic race cars from six brands with 14 different models ensure a considerable bandwidth and an impressive presentation of motorsport history on the DTM platform.

The legendary Ford Zakspeed Capri Turbo and the massive Sauber BMW M1 Group 5 rank among the most impressive representatives of the DRM era that ranged from 1972 until 1981. The brand from Munich, the strongest in the field with eleven cars, is represented with five different vehicle types, next to the unique M1 also the beautiful 3.0 CSL, the classic 2002, the 635 CSi and the earliest 3-series models. Next to the Capri, an Escort RS 1600 complements the early DRM spell of the Cologne-based manufacturer. Porsche, from Zuffenhausen, made a decisive mark on the DTM’s predecessor series DRM and is present with the classic Carrera RSR 3.0 but also with one of the rare 914/6s. Especially for the five participants with cars of the Italian Alfa Romeo brand, the event at the Grand Prix track in the Emilia-Romagna region is likely to be an unforgettable experience. Next to three 1750 GT-Ams and a Giulia Sprint GTA, a rare Montreal in Group 4 version is present as well. Other rare cars are a De Tomaso Pantera, also prepared to the liberal Group 4 regulations, and an Opel Monza 3.0 in the characteristic Gilden Kölsch livery.

All the drivers, male and female, have a heart for their automotive gems, lovingly taking care of them with considerable effort, but at race tracks like the 4.909 kilometres long Imola circuit, they push them to remarkable lap times. Two former DTM drivers are in the field as well: Otto Rensing, a BMW Junior since 1986 who raced a BMW M3 in the 1991 DTM, is alternating with Michael Hess to drive a Porsche Carrera RSR 3.0 while Stefan Mücke, who raced in DTM with Mercedes-Benz from 2002 till 2008, and popular team principal Peter Mücke are a father-and-son team racing the Zakspeed Capri. Two brother pairings with Peter and Jürgen Schumann with the BMW 635 CSi and Stephan and Matthias Jocher with the Opel Monza plus Ute and Stefan Schreiber with the Alfa Romeo 1750 GT-Am as the only couple are also part of the illustrious field, just like Adrian van Hooydonk, who, as the head of BMW Group design, is obviously bringing a nice BMW 3.0 CSL Coupé to the track.

The DTM Classic DRM Cup is the first-ever thoroughbred championship for DRM race cars and, after Imola, will be in action at two further long-standing race tracks: Nürburgring from 26 till 28 August and the Red Bull Ring in Styria from 23 till 25 September. Two qualifying sessions of 20 minutes each (at 9.35am on both days) and two races of 25 minutes plus one lap (at 5.05pm respectively 4.15pm) are held on Saturday and Sunday. Moreover, there are 30 minutes of free practice on Friday already. All practice sessions and races of the DTM Classic DRM Cup will be aired live at Servus TV On (servusTV.com), Servus TV’s video and streaming platform, and DTM Grid (grid.dtm.com).