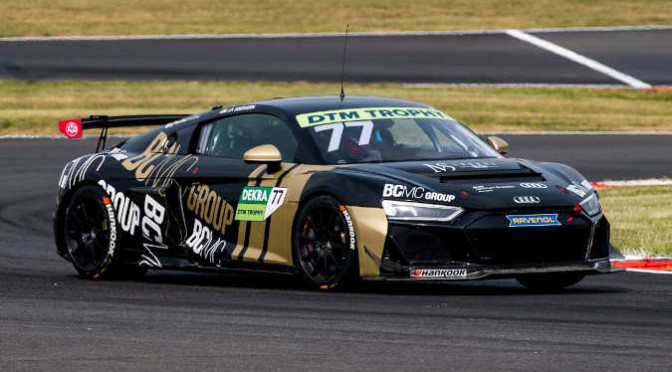 Dresden-based team T3 Motorsport having been forced to cancel its participation in DTM and DTM Trophy at Imola this weekend (17 till 19 June) at short notice on Tuesday, American John Paul Southern Jr. didn’t need long to start searching for a replacement team by himself. And indeed, he sourced the Eastside Motorsport team from Crimmitschau in the Zwickau area.

The Eastside Motorsport founders spent the past ten years working as freelancers for various teams before setting up their own team in 2019. As the team was also involved with its manpower in the T3 participation in DTM Trophy in 2021, both the car and the driver are familiar to the crew. Team principal Florian Schön: “We are delighted to be taking on the DTM Trophy challenge as a team together with JP Southern. We are and we remain a team that is loyal to Mercedes-AMG, but both from the mechanics’ and from the engineering team’s sides, we have sufficient experience with the Audi to enable JP to fight for top positions.” For Eastside Motorsport, it is still an enormous challenge the team is taking on at Imola, almost 1,000 kilometres away, on an ad-hoc basis. “We would like to thank our staff in particular for giving up their weekend off with their families for this spontaneous effort,” team principal Schön adds.

20-year-old Southern, who finished on the podium in the first race at Lausitzring right away, is delighted about this last-minute opportunity. “Of course, T3’s cancellation was a shock for me and put me in an unusual position. Thankfully, with the help and support from everyone at T3 Motorsport, we could agree with Eastside Motorsport on taking part at Imola. I am really happy that I am able to continue my championship campaign. I just can’t sufficiently thank everyone involved.”

Martin Tomczyk, responsible for the DTM Trophy series’ management, also acknowledges the personal initiative by the driver and the commitment of the Eastside Motorsport team: “It is great that JP Southern has found an opportunity to race at Imola in spite of the conditions. We at ITR have supported this intention within our possibilities from the very first minute onwards as we really care about the young talents and the series.”

The two DTM Trophy races on Saturday and Sunday (race start at 3.15pm on both days) and all the practice sessions are streamed live at DTM Grid (grid.dtm.com). On the Servus TV television programme, the two races from Imola will be broadcast on Saturday at 7.15pm and on Sunday at 11.50pm CEST.