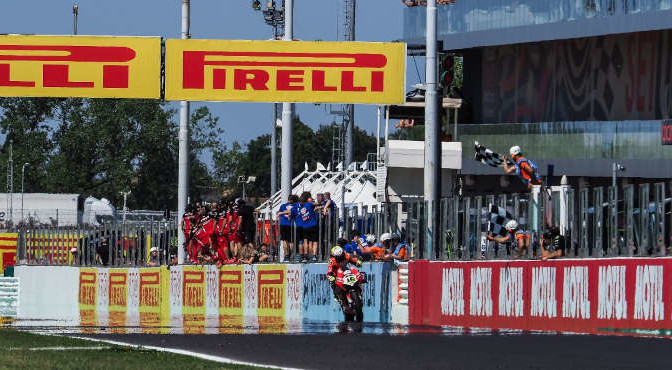 P1 – Alvaro Bautista (Aruba.it Racing – Ducati)
Bautista won Race 2 after an early-race battle with Razgatlioglu, before escaping to win by more than seven seconds
He extended his Championship lead to 36 points over Rea, the biggest gap there has been at the top this season so far.
“I’m happy because I can be fast but also, I can think on the bike. I can be calm and attack when I have to attack and do my best to not pass over the limit. I’m quite happy. I battled with Jonathan in the beginning and with Toprak and, in that moment, saw my pace could be a bit faster. I tried to get ahead like I did yesterday. It cost me some laps because the fight with Toprak was so nice. I enjoyed it a lot. In the end, I can increase my gap to Toprak and get the victory. I don’t think about the Championship. Three years ago, I think I was more than 60 points in front and then I lost the Championship by more than 150. In this moment, it’s too soon. I try to just be focused on the work that we are doing, enjoy the bike like I am doing and just get the maximum in all conditions. Sometimes, if I can fight for the win, I will fight. If I can fight for fifth, I will fight. The important thing is just to finish the races, get more information, and have more fun riding the bike.”

P2 – Toprak Razgatlioglu (Pata Yamaha with Brixx WorldSBK)
After claiming his first 2022 win in the Tissot Superpole Race, Razgatlioglu finished in second position in Race 2 despite taking the lead on the opening lap.
His second place means he claimed his 63rd WorldSBK podium.
He remains third in the standings 79 points behind Bautista.
“In Race 2, I tried my best again in the very, very hot conditions. Last year, I don’t remember the weather like this. I tried my best again in the race. Alvaro was very fast, and in the straight the Ducati was very fast. Some sectors, I’m quicker. Some sectors, he’s fast. After 10 laps, he went alone. I said ‘okay, second position is enough for me today’.”

P3 – Michael Ruben Rinaldi (Aruba.it Racing – Ducati)
Rinaldi claimed his second third position of the weekend after starting from 10th on the grid.
He now has a record of 12 WorldSBK podium, including 5 on home soil.
“This afternoon, our strategy was to push really hard from the beginning because if not I would have lost the leading group. Then, after I passed Rea, I put my pace because Bautista and Razgatlioglu were too fast for me today. But I’m really proud of our recovery since Sunday morning.”

P4 – Jonathan Rea (Kawasaki Racing Team WorldSBK)
After having been overtaken by Rinaldi, Rea was unable to follow him and crossed the finish line in fourth.
It’s the first time this season Rea has finished a race outside the podium places.
He maintains second place in the Championship with 184 points.
“I put up a fight at the beginning but when I’ve seen the pace of Bautista and Toprak especially, I knew it would be tough and then Rinaldi came past, it was all I could do. I was running myself into some mistakes. I had lost lots of rear entry traction so I as soon I released the brake I was having a front chatter. So it was almost the case of nursing my bike home considering the points and moving on.”

P5 – Iker Lecuona (Team HRC)
Lecuona took fifth place in Race 2, his sixth top-five finish so far this season.
He stands in fifth place in the Championship standings, only 9 points behind fourth-placed Andrea Locatelli.
“Overall, I’m really happy. We didn’t expect this speed during the weekend. Starting from fifth in Race 2 helped me a lot to follow the top guys. I struggled with my rear tyre for the first laps. I didn’t feel comfortable. But in the end, I managed to be faster and I could create a gap to the guys behind me.”

P6 – Andrea Locatelli (Pata Yamaha with Brixx WorldSBK)
Locatelli completed Race 2 top six after losing out at the start of the race.
He finished all three races at Misano in sixth place, and has only recorded one finish outside the top six all season
“It was a difficult weekend for me. But it’s been better than last year so it’s a good point for us. We need to continue to work on the bike to try to close the gap to the leader. It was also our first race in hot conditions this season so for sure, we learned some things about where we need to improve the bike and where I need to improve myself.”

Axel Bassani (Motocorsa Racing) took seventh place despite losing out after making a superb start. Alex Lowes (Kawasaki Racing Team WorldSBK), who have been given a Long Lap Penalty for track limits infringements in the race, finished in eighth.

After a strong start to the race, Xavi Vierge (Team HRC) had a crash at Turn 11 on Lap 12 which ended his race. After being taken to the medical centre, Vierge was diagnosed with fractures to the base of his third metacarpal bone on his right hand and to his capitate and hamate bones on his right wrist.

The Prosecco DOC UK Round will take place from the 15th to 17th of June at Donington Park.