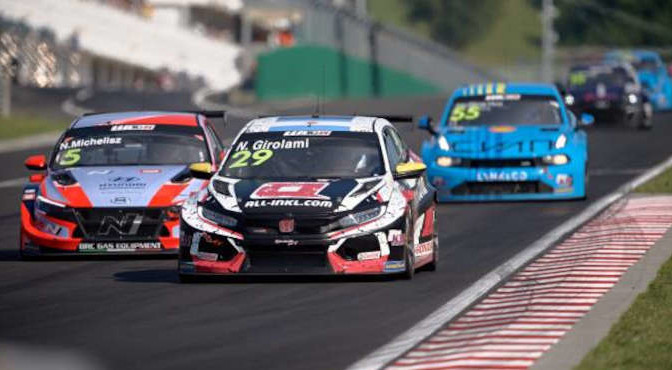 The maximum compensation weight being carried by the Honda Civic Type R TCR, at what is traditionally a stronghold for the car, hampered all four drivers but ‘Bebu’ recorded two top 10s, headlined by a third-place finish.

The Argentinian managed to hold third at the start, then placed his car perfectly over the remainder of the 14-lap distance – saving his push on new tyres for the final three corners of the 4.381-kilometre circuit to ensure he had a gap to the car behind on the run to Turn 1.

As a result of that podium, he ended the weekend second in the Drivers’ standings – nine points off the summit – following a similarly calculated drive to seventh in Race One.

There, he and ALL-INKL.COM Münnich Motorsport team-mate Esteban Guerrieri fought valiantly to keep cars behind.

Esteban spent the early part of Race One behind Nestor and eventually finished in ninth.

Ahead of Race Two he and the team tried a change of set-up direction, but this did not pay off and as a result he opted to bank points, crossing the line in 11th.

Like qualifying on Saturday, race day was a difficult one for LIQUI MOLY Team Engstler pair Attila Tassi and Tiago Monteiro.

In front of his home crowd, Attila plugged away in both races and brought home a pair of 14th-place finishes, which he felt was the maximum available.

Tiago was right behind his team-mate in Race Two in the last of the points-paying positions, having finished just outside of them in 16th in Race One.

The car was fantastic this weekend. Race One was quite tough, because carrying 40kg here is not easy. I said to the team we needed to make a big change for Race Two if we wanted to keep third and we did exactly that. I got a good start – not a brilliant one, but it was enough to keep third – and then from lap one I was only pushing in the last three corners, because I knew if I managed to get the gap from the last corner to the first corner I would be able to defend my position. We have to be very proud of this podium. The mechanics did a fantastic job changing the set-up from A-Z every time, but it paid off and I’m very grateful to the team.

Today I couldn’t capitalise and score the amount of points I really wanted to. We were not that competitive in Race One, and struggled quite a bit with the heat and a balance issue. For Race Two, we opted for a redirection to try to balance the car a bit better, but actually it went the opposite way. I wasn’t really in control of the pace of the car – if I put more in I ended up understeering too much. I was that slow that there was little sense in fighting the others, because I might have got involved in a crash or something and it was important to finish the race. It was not great, but at least we got that information from today. We’ll keep fighting.

We have a margin to improve, I think that’s what we learned from today. It’s not the result we wanted after yesterday’s struggles, but I think considering the opportunities we had today this was pretty much as good as it would get, as tough as that is to say. The races were really hard and our pace – all of the Honda Civic Type R TCR drivers – was slow compared to the other brands, so we can definitely feel this 40kg compensation weight over a race distance. At home I wanted to perform the best possible way, but I’m really happy, proud and humbled to see all the fans who came here across the weekend. I’m just disappointed I was not able to give them the result I wanted.

We came to the first conventional race track of the season, where knowledge of the tyres and the car and understanding the balance is crucial, and now we’re feeling the lack of testing that we had over the winter. I’m not surprised, but I also maybe wasn’t expecting as big a difference. But it also feels like there is a bit of a discrepancy in the way we are balanced as every other car can fly past whenever they want to. Pau and the Nordschleife maybe hid that a bit, but this is the reality. We cannot fight for wins. We will work, we continue to work, but we know it’s not just us that need to work. Hopefully we’ll be able to make some changes before Aragon.