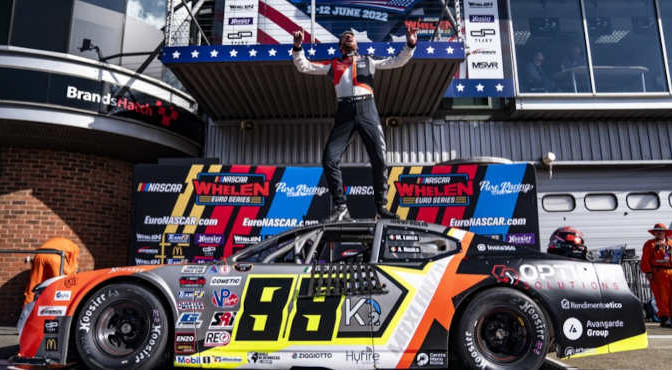 Alberto Naska is a two-time NASCAR Whelen Euro Series race winner but the second one definitely had a special flavor for the Italian. Naska made a late dive in overtime on Vladimiros Tziortzis to take the victory at the Indy Circuit in Brands Hatch and defend his EuroNASCAR 2 championship lead. With an emotional visit to Victory Lane, the driver of the #88 CAAL Racing Chevrolet Camaro also topped the standings of the Rookie Trophy classification.

It was a particularly emotional win for Naska as he couldn’t celebrate the first one in Valencia because it came after a post-race penalty for Tziortzis. Naska has now extended his championship lead to 14 points over Tziortzis, who moved up to second while Liam Hezemans moved up to third, two points behind the Cypriot. Ulysse Delsaux and Martin Doubek are tied for fourth.

Naska started from third on the grid and made a good charge into Paddock Hill Bend to gain position and take over second ahead of 2018 EuroNASCAR 2 Champion Delsaux. Naska had his hands full with the Frenchman putting a lot of pressure on him. Meanwhile, Tziortzis had a comfortable lead of about two seconds. Two safety car periods bunched the field up again, triggering an overtime finish, and Naska made the decisive dive on Tziortzis at Druids on lap 31 of 32 to win the race.

“I don’t know, I don’t know really, I just switched off the brain, turned on the instinct and I did it!” said an emotional Naska in Victory Lane. “I think it was all the experience from years of racing, both in the simulator and in real life, that got me aware about the situation, that got me to understand not to give up at the beginning and to keep fighting until the last lap. And this is … This is my victory!”

While Naska was celebrating his win with the CAAL Racing team, Tziortzis expressed his disappointment. The Cypriot looked like a safe bet but he was surprised by Naska’s late charge on the final restart. Having the bigger picture in mind, the Academy Motorsport / Alex Caffi Motorsport driver is still happy about having collected important points for the EuroNASCAR 2 championship battle. Tziortzis is poised to strike back in EuroNASCAR 2 Round 4 on Sunday.

Liam Hezemans sneaked his way up to the podium with a strong passing maneuver on Ulysse Delsaux, who lost several places on the last restart and also had a brief run off on the grass. The Dutchman took second in the Rookie Trophy and scored another promising result in his young auto racing career.

Melvin de Groot scored his first top-5 of the season by finishing fourth under the checkered flag. The Dutchman continues to dominate the Legend Trophy with his third consecutive win in the special classification for drivers aged 40 and more. Despite a tough overtime for Delsaux, the Frenchman managed to bring home his #3 RDV Competition Chevrolet Camaro in fifth, while Tuomas Pontinen got into the top-10 in his first start with a sixth place finish. The Finn also completed the Rookie Trophy podium.

2021 Brands Hatch race winner Advait Deodhar followed in seventh ahead of Miguel Gomes, who not only finished eighth but also took second place in the Legend Trophy. A 5-second penalty for a restart infringement demoted Doubek, who took the checkered in fourth position, back to ninth. Roberto Benedetti joined De Groot and Gomes on the special classification’s podium by finishing tenth. Luli Del Castello grabbed her second Lady Trophy win of the season in 16th.

The first caution period was triggered on lap 17 when Arianna Casoli’s car stopped at the entry of Paddock Hill Bend. The Italian had already started the race from pit lane and suffered from technical issues. On lap 24, Claudio Cappelli went off the track at Clearways, triggering another safety car period that brought the race to overtime.

The ninth edition of the American SpeedFest continues on Sunday 11 with two more races at the 1.944 kilometer Indy Circuit of Brands Hatch. While EuroNASCAR PRO will be back in action at 2:40 pm CEST (1:40 pm local time), while the EuroNASCAR 2 race will go green at 5:00 pm CEST (4:00 pm local time). All races will be broadcast on EuroNASCAR.com, the NWES YouTube channel, Motorsport.tv and several TV services from around the world.