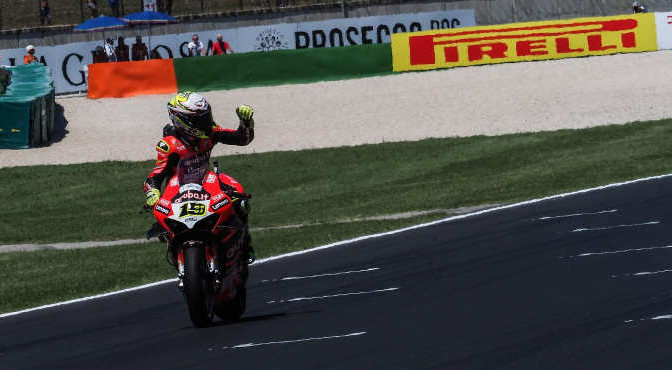 P1 – Alvaro Bautista (Aruba.it Racing – Ducati)
Bautista claimed his fifth win of 2022 by 5.128s of Rea.
Race 1 win means it was his tenth consecutive podium whilst he remains the only rider to have been on the podium in every race this season.
He extended his Championship lead to 22 points over nearest rival Rea.
“Today, the track was hotter than practice, so it was important to understand how much grip the track had and where the limit was. At the beginning, I stayed calm, battled a bit with Jonathan and Toprak and I could see that Toprak was struggling a bit into the corners and Jonathan had a better pace. I tried to stay behind Jonny, as I saw his pace was good, so I followed him to not use the tyre a lot. When I saw Jonathan started to be a bit slower, I tried to get the lead and to put my pace. I started to go faster, so I’m so happy because in every moment, I was under my limit. The feeling with the bike was good and if I went faster, it was because I felt I could go faster, not because I was risking more! To win is always special but to win here at Misano, Ducati’s home, is very special! After two years of suffering a lot, I am enjoying a lot! With all the fans coming into the paddock to celebrate the victory with! It’s fantastic to have all of them here supporting us and I hope to give them another two races of show tomorrow!”

P2 – Jonathan Rea (Kawasaki Racing Team WorldSBK)
Rea finished in second place after having battled with Bautista and Razgatlioglu in the first two-thirds of the race.
Rea’s second place gave him his 224th podium and ninth in 2022 as well as Kawasaki’s 498th in WorldSBK; just two shy of a landmark 500 podiums.
It was Rea’s 16th podium at Misano as he equals Troy Corser’s track record set in 2010.
Following Race 1, Rea remains second in the Championship standings with 144 points.
“It was a tough race. Alvaro had a great rhythm especially at the end of the race. I felt for half distance I was there, I felt like the strongest one because every straight I was expecting him to come fast, but we were able to exploit all the strength of our bike. When he came through, he had a much better rhythm. He made some mistakes but then he started to clean up his riding and was able to go away. I learned some things out there and we will try to put that into practice tomorrow, make the bike a little bit better and making it more competitive.”

P3 – Michael Ruben Rinaldi (Aruba.it Racing – Ducati)
Rinaldi completed the top three for his home round, finishing 3.161s behind Rea.
He was on the podium for the first time this season, claiming his first podium since the 2021 Argentinean Round.
“I’m really happy about this race because, in front of this crowd, it’s unbelievable. Also, to look at myself, we improved a lot since the last rounds. I was able to make a good pace for all 21 laps so really proud of that. For sure, we are missing something, because Alvaro is making a difference, but I cannot be happier about this improvement. I didn’t make a very good start and also my pace at the beginning wasn’t good. I said to myself ‘you need to stay calm; you need to save tyres and then you have to stabilize your pace’. It paid off because, in the end, I was really fast. We were also the brain in this race!”

P4 – Axel Bassani (Motocorsa Racing)
Starting from 10th on the grid, Bassani secured fourth place as he took his best result of the 2022 season.
It was Bassani’s first top-five finish since the 2021 Indonesian Round
“I tried to arrive on the podium but today it wasn’t possible. I’ll try again tomorrow. I’m very happy of the job we made with the team, I’m happy with our performance today. I’m really focus on tomorrow cause I’m aiming for a podium finish. I will try for a top five finish in the Tissot Superpole Race to then be able to claim a podium finish in Race 2. It will be difficult but not impossible.”

P5 – Alex Lowes (Kawasaki Racing Team WorldSBK)
Lowes finished in fifth place after he battled his way back into a top five finish.
The British rider has record four top-five finishes in 2022
“I had a good start and then on the second lap I had to run wide to avoid a crash. Unfortunately, I didn’t have the speed in the first two or three laps and the guys were attacking me. It was a shame and I need to work on that for tomorrow because after these two or three laps, I had a good pace and I could challenge Rinaldi and Bassani. With the hot temperatures, it was hard for me to really trust the front and really be aggressive to pass the guys so that’s something we need to work on for tomorrow.

P6 – Andrea Locatelli (Pata Yamaha with Brixx WorldSBK)
Locatelli completed the top six as he finished 1.4s behind Lowes.
He stands in fourth place in the standings, only 15 points behind his teammate.
“For me it was not the best race today but for sure it’s another interesting result because in the end it was very difficult to win the race. The feeling with the bike was not the best today. I don’t understand why because when we arrived here, we worked very well and the feeling with the bike was good but today the conditions were completely different. We have two more races tomorrow and we’ll work tonight to try to reduce the gap and stay more in front.”

To note:
Toprak Razgatlioglu (Pata Yamaha with Brixx WorldSBK) suffered a technical issue on his machine on Lap 14 and retired from the race. The reigning WorldSBK Champion maintained his third place in the Championship standings but is now 77 points behind Bautista.

Xavi Vierge (Team HRC) was the first Honda rider in seventh, with Scott Redding in tenth place for BMW. Roberto Tamburini (Yamaha Motoxracing WorldSBK Team) claimed his joint-best WorldSBK result with 11th place on his first race back after injury.