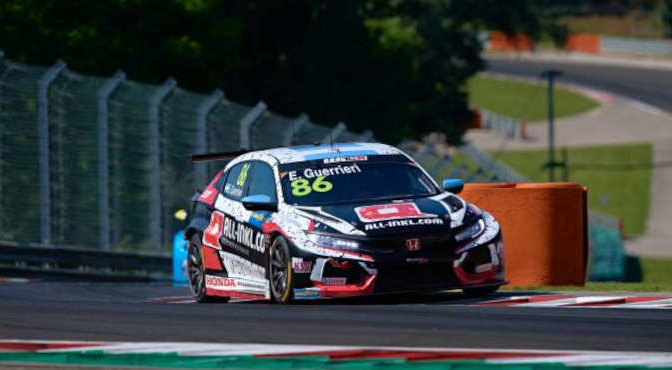 The Argentinian hauled his ALL-INKL.COM Münnich Motorsport Civic Type R TCR – carrying the maximum 40kg compensation weight – into the pole position shootout with his sole lap in Q2, beating the cutoff by 0.054 seconds as 0.174s covered the top six in an ultra-tight qualifying.

A track limits infringement meant his lap in Q3 was discounted, but he still secured a top-five place on the grid for Sunday’s opening race, plus two bonus points for setting the fifth-fastest time across all three qualifying sessions.

Team-mate and points leader Nestor Girolami was three tenths further back in that Q2 session and will line up seventh for the opening race once penalties for others are applied.

Like his compatriot Esteban, ‘Bebu’ was inside the top 10 throughout Saturday’s sessions and eighth in qualifying means he will start Race Two from third on the partially reversed grid.

The day was a difficult one for LIQUI MOLY Team Engstler pair Attila Tassi and Tiago Monteiro, who ended up 14th and 17th.

FP1 and an extended FP2 session represented the first chance for Attila and Tiago to sample the new specification of front-tyre compound, introduced in Hungary at the recommendation of control tyre supplier Goodyear, while others had been able to sample it in a test at the Slovakiaring earlier this week.

Though Attila’s ninth place in FP2 hinted at the pace available, there was to be no advance to Q2 for the home favourite as both he and Tiago were eliminated in a Q1 session where a second covered the entire field.

A top five is a good result, but at the same time I’m a bit disappointed with my approach in Q3. I thought the guys who were in front of me in Q2 would aim for a 1m51.6s, something like this, and I needed a couple of tenths from Q2 to make that time. I went for it but it didn’t work – I got my rear tyre down from the kerb and there were track limits at that corner and I just exceeded them. Tomorrow, we’ll try to make a good start and then just fight with a heavy car, which will not be easy. Let’s see how it goes.

It was a very positive day keeping in mind that we have maximum compensation weight. I think we did a pretty solid job today by trying different things with Esteban in practice and putting together the best set-up possible for qualifying. I probably could have done a better lap in Q2, but the red flag stopped my first attempt and on my second one I didn’t want to take the risk of missing track limits or making a small mistake. I want to congratulate the team because they gave us excellent cars and also my crew in particular for working flat-out to try different things. I hope tomorrow we can get good points and defend the Championship lead.

That was not the qualifying we were expecting before the weekend, definitely. We knew after free practice that it would be a tough one as we were struggling with the new compound of tyres. It seems like it requires some set-up changes that we didn’t know about until FP1 because we didn’t have the chance earlier this week to test them. I was improving throughout qualifying, I feel like I was extracting almost the maximum out of the car. But we never give up; we have a long night ahead and will have a deep-dive into the data and look at the onboards, then we’ll try to come up with something that can solve our problems.

Another difficult day at the office. We’ve been struggling since this morning with instability with the car, and it’s been difficult to find the right balance. I think the lack of testing we had over the winter and at the start of the season has had an effect. Every time we’re on the track we’re trying to discover the right balance, and we still don’t know the tyres very well. It’s tough and frustrating. I honestly drove quite well, but still it’s a very competitive championship and if you’re not perfect it doesn’t work. We need to understand how to get a better balance and keep improving.