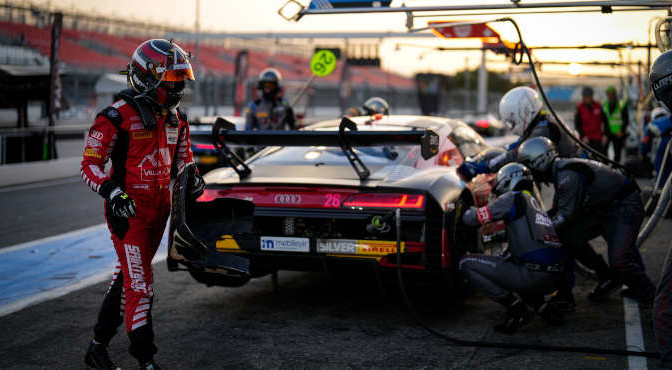 With the 1000 Kilometres of the Circuit Paul Ricard, Nicolas Baert discovered a new aspect to his journey in the Fanatec GT World Challenge Europe: the longer races at the wheel of the Audi R8 LMS GT3 Evo II. Sixth in the Silver Cup with César Gazeau and Aurélien Panis, his team-mates from Saintéloc Racing, the Belgian driver has above all gained valuable experience before the 24 Hours of Spa.

The sun had long since set when the chequered flag was flown for the 1000 Kilometres of the Circuit Paul Ricard this Saturday shortly after midnight. By reaching the finish of this Fanatec GT World Challenge Europe race, Nicolas Baert and his team-mates Aurélien Panis and César Gazeau achieved the objective they had set themselves. “If we look at the raw result, we could have hoped for better than this 6th place in the Silver Cup, and 20th overall,” admits Nico. “However, we were not too successful when the safety car came on track just before the halfway point. I was first behind the leader and, instead of catching up with the pack, I found myself far behind our rivals who had been just ahead of us at the time of the safety car intervention.”

Between the leaders in the overall standings, the Saintéloc Racing Audi R8 LMS GT3 Evo II showed good pace at the start of the race. “In terms of experience, it was a wonderful lesson,” explained Nicolas. “While trying not to disturb the leaders, I was able to follow them as much as possible and analyse their driving. I learned a considerable amount! In general, this race was a very good rehearsal before the 24 Hours of Spa. The changing light conditions, the traffic on the track, and the management of a double stint of two hours… I was there to learn, and I certainly did!”

At a sporting level, the driver sporting the colours of Comtoyou and Villa d’Olne also showed very good pace. “In the race, it was really good,” he says. “My personal best lap time was almost the same as Aurélien’s and I was also very consistent. I approached things in a calmer way and it paid off. I suppose that is also a part of the learning process for an endurance driver. But I know that I have to improve in the qualifying lap. I was not happy with my time: I could not quite put everything together at the right time. That is something I need to work on.”

The 20-year-old Belgian will not have to wait long before he can get back to work. In less than two weeks he will be back in action at Zandvoort for the third round of the Sprint Cup of the Fanatec GT World Challenge Europe. “Together with my team mate Gilles Magnus, we proved in Magny-Cours that we can at least aim for a podium place,” he explains. “That will be the goal again! And as Zandvoort is not very far from Belgium, I think I should have some friends and supporters to cheer me on. I am looking forward to it!”