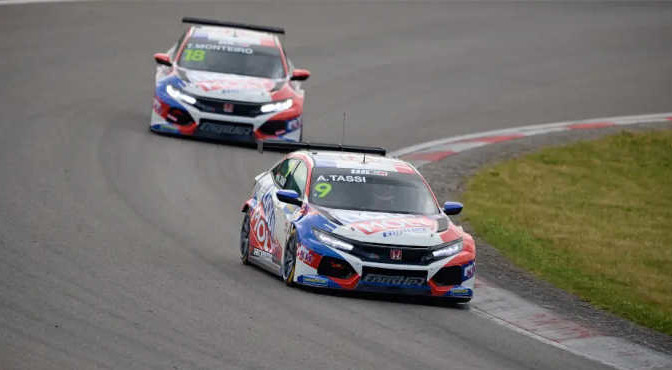 Nestor was one of three Honda Racing drivers who experienced tyre delaminations in qualifying, but his effort still secured third place on the partially reversed Race One grid.

‘Bebu’ set his fastest time on his first lap of the 30-minute qualifying, which was preceded by a 15-minute test session to allow teams to sample new tyres brought by control supplier Goodyear.

He had been on course for a place in the top three at the time, but suffered a delamination in the final sector as his Civic Type R TCR’s right-hand fender also broke.

The ALL-INKL.COM Münnich Motorsport crew, who had earlier completed a splitter change on Nestor’s car at the start of the session, patched up the car to allow him a second attempt at the end of the session, but despite setting the fastest second sector of all he then had to back out of the lap when a car ahead crashed.

His team-mate Esteban Guerrieri was also unable to improve on his second lap and qualified 13th.

Esteban had some oversteer in his Civic Type R TCR on his first run and though he was not completely satisfied with the alterations made for his second run he was improving, until he went onto the grass at Flugplatz.

LIQUI MOLY Team Engstler pair Attila Tassi and Tiago Monteiro were both luckless, as each suffered delaminations of their own.

Attila, the pacesetter in Thursday evening’s FP2 session, was on course for an outstanding lap on his second run based on his times in the first four sectors.

But his issue on the front-left tyre – which came as he headed onto the long run on the Döttinger Hohe – left him dragging his Civic Type R TCR through Tiergarten just to finish the lap.

That meant having to rely on his first time, which in the end put him only 14th.

Team-mate Tiago was able to improve his time on the final lap, but running just behind his team-mate suffered his own delamination at a near-identical place to Attila.

That left him a frustrated and unrepresentative 16th.

I had an issue with the splitter during the test session to try the new tyres, so we lost some time at the start of qualifying. The guys did a great job to repair it, but the concern about whether the splitter would last was there. On my first run it was vibrating when I went above 200km/h, so I was praying all the lap that it would hold until the finish. Unfortunately, after Döttinger Hohe the front-left tyre got delaminated. I finished the lap but slowed a lot trying to make the final corners as I had a lot of understeer. I was improving on my next lap but then a car crashed ahead of me and that was it. Even though it could have been better, after the issues we’ve had I am pleased to be in the top 10.

We probably didn’t make quite the right decisions between our first and second runs. The first one was decent but with quite a bit of oversteer in crucial parts of the track, which cost me some time. Then when I went out for the second run, I had a good first and second sector but at Flugplatz I lost the rear on acceleration at about 220km/h and I went off onto the grass. I lost a bit of momentum there and I tried to recover it, but I had some more oversteer in another corner so that was basically the lap done. It’s a shame to be outside the top 10, but we live to fight again tomorrow.

After yesterday’s new tyre run I was quite positive and the balance felt quite good, despite the fact we couldn’t do any relevant laps in FP1. My first qualifying lap was a little bit safe because there were two places on the Nordschleife where it was particularly slippery. The start to my second lap was not perfect, but I knew where I had margin on the Nordschleife and I tried to use it; the lap mostly felt very good. Already though the car was feeling a bit lazy considering I was on a brand new set of tyres, and when I got onto the Döttinger Hohe I got a delamination and it was just impossible to drive. The bad luck continues, but we never give up and will try to maximise the opportunities we have.

We know everybody’s doing their best and has the best sporting interest at heart, but sometimes we have to think with cool heads as it’s a risk that we’re taking at the moment. Some drivers including me and my team-mate had issues with the new tyres in qualifying and now we are at the back of the pack and it’s not reflecting our performance. It’s frustrating, not only because these factors are outside of our control but it’s also dangerous for us drivers. I don’t know what the options are, but I think we have to be realistic and think about safety first.