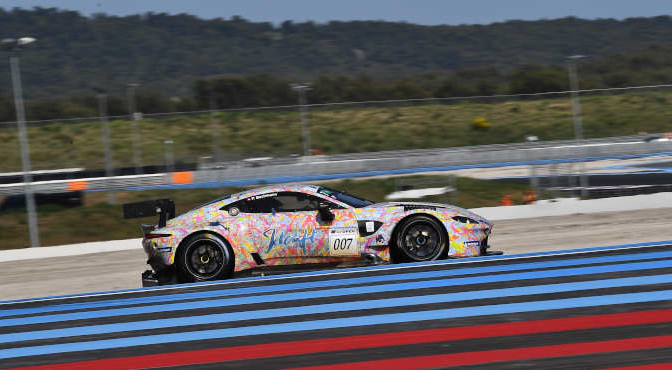 Street-Art Racing has started its 2022 season at the Circuit Paul Ricard. By entering its Aston Martin Vantage AMR GT3 in the International GT Open and the GT4 version in the GT Cup Open Europe, the Belgian team has discovered two new competitions. In the heat of the South of France, the learning process began perfectly.

Discovering a new championship is never easy, and doing it with two different cars does not make it any easier. And yet, there was nothing but smiling faces in the Street-Art Racing pit on Sunday after the last race at the Circuit Paul Ricard.

“Our drivers did exactly what was expected of them,” confirmed Damien Hellebuyck, the Team Manager of the structure based in the suburbs of Charleroi. “They learned a great deal and progressed very well. But I am also very happy with the work of the entire team. We had a few setbacks, including a breakdown of one of our transport trucks, and everyone did their bit to make sure everything went as smoothly as possible. I am proud of them!”

For Albert Bloem, there were many reasons to be satisfied. “In addition to our progress over the weekend, we welcomed more than 100 guests in our reception area,” confided the Team Principal. “They were delighted to have access to the starting grid and to enjoy the friendly atmosphere of the championship. In short, it was a complete success!”

The #007 Aston Martin Vantage AMR GT3 Art Car, decorated by Christophe de Fierlant, did not go unnoticed in the International GT Open field. Its looks were sensational and it was the target of cameras and photographers. Pascal Bachmann drove the car solo to maximise track time and speed up his learning curve. The Swiss driver got off to a good start in the first qualifying session, setting the fourth fastest time in the Amateur class, less than a second off the class pole position. In the race, he suffered more by driving so long for the first time. “Running 70 and 60 minute races on my own is very different from the 30 minute stints I did in the GT4 European Series last year,” he said after finishing 7th and 5th in the Amateur class. “Physically and in terms of concentration in particular, it is a big step to climb and I know I can clearly improve my race pace. But I loved it!”

Competing in the GT Cup Open Europe, which is the second division, the Aston Martin Vantage AMR GT4 was driven by Jahid Fazal-Karim and his coach Julien Darras. In a competition mixing Porsche 911 GT3 Cup and “unbridled” GT4 cars, the two Frenchmen put up a good fight. In the first qualifying session, Julien even caused a sensation with an excellent 3rd fastest time. “We had a great first weekend,” he confirmed. “For a first appearance in the championship, Jahid has made good progress and, as is also the case for Pascal, he needs to optimise his confidence in the car’s capabilities. But I am convinced that it will come. From a purely sporting point of view, we cannot do anything against the Porsche Cup cars which are lighter and have more downforce than us. But that is not the main thing. We are here to learn and progress and that is what we did this weekend.”

The professional calendar for Jahid and Pascal does not allow them to compete in the next round of the International GT Open and the GT Cup Open Europe at Spa-Francorchamps, so Street-Art Racing will return to the championship in Hungary, at the Hungaroring in Budapest, from 8 to 10 July next.