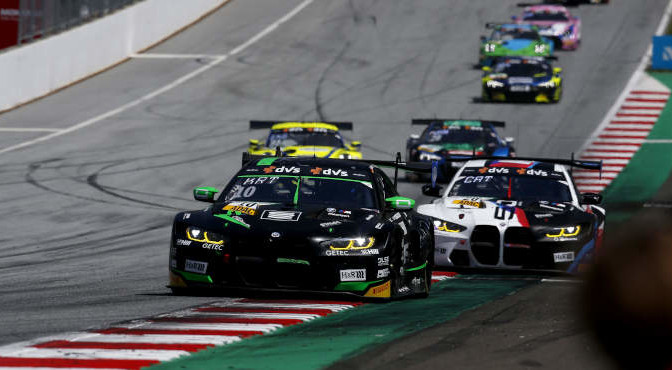 A man possessed: After his sensational victory in Saturday’s opening ADAC GT Masters race at the Red Bull Ring, 19-year-old Niklas Krütten repeated the feat on Sunday. The former ADAC Stiftung Sport driver gave the opposition no chance in the morning’s qualifying session and secured pole position for the Schubert Motorsport team in the BMW M4 GT3. Krütten and his team-mate Ben Green (GB) then claimed a fairly comfortable lights-to-flag victory in race two in Austria. Thanks to their maximum points haul this weekend, the two youngsters have now moved into the championship lead in the ADAC GT Masters. “It doesn’t happen very often, but I am speechless. We can hardly contain our joy. What an awesome couple of days,” said a delighted Krütten after his brace of victories.

Krütten drove intelligently at the start and successfully fended off the attacks from Catsburg in the second Schubert car to defend his lead. “I tried to make Niklas nervous all day, so that I could win the start. Unfortunately, however, he kept his cool,” said the Dutchman with a chuckle. Krütten was able to maintain a consistent lead over his pursuer, and came in from the lead to hand the #10 BMW M4 GT3 over to Green. The Brit also showed nerves of steel and secured win number two for the duo.

Niklas Krütten: “Although I didn’t let it show, my pulse must have been at about 200 at the start and on the opening lap. I was pretty nervous when I saw Nicky so close in my rear-view mirror. However, I felt better with every metre and noticed that I was able to control the race. The BMW was incredibly good and fast. I only slightly noticed the extra 20 kilograms after Saturday’s win, if at all. This weekend has been awesome and I am really happy and proud of the team.”

Krütten now heads to Barcelona on Monday, where he will complete two night tests in an LMP2 car for COOL Racing in preparation for the 24 Hours of Le Mans. The two-time ADAC GT Masters race winner will then travel to the Nürburgring on Wednesday night, where he will again drive for Schubert Motorsport in the legendary 24-hour race.