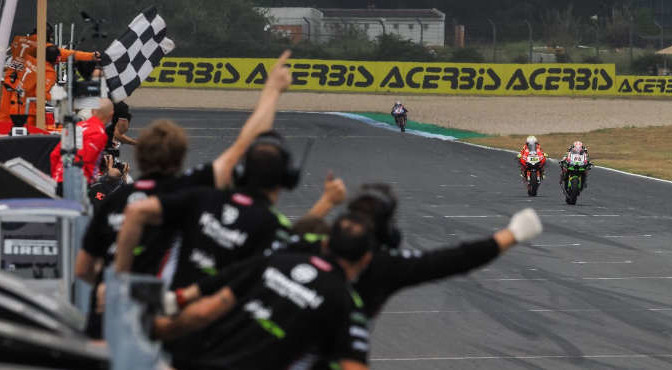 After winning the Tissot Superpole Race, the Northern Irishman also triumphed by a narrow margin in Race 2
Race 2 highlights – WorldSBK

P1 – Jonathan Rea (Kawasaki Racing Team WorldSBK)
Race 2 saw Jonathan Rea make his 350th start and take his 117th career win.
In both the Tissot Superpole Race (ahead of Razgatlioglu) and Race 2 (ahead of Bautista), he won by under 0.2s.
He reduced Bautista’s lead in the Championship standings to just 17 points.
“I played my cards especially on the last lap. The race was quite stressful. We had this sea mist all race, especially in the last section of the circuit, going into Turns, 7, 8, 9, 10, 11, 12 so my visor was full of water and after a few laps behind Toprak, we had grip so I just convinced myself that it was dry. When Alvaro came past, it was like a seriousness of the race just switched on, so I knew I had to be there, to go with him. He did a really good job and I could use his slipstream on the start straight just to claw back a few kilometres, even though he was going away it was just enough to keep me there. I made a good Turn 1, by Turn 3 I was already there so I could be calmer at the rest of the track just to stay there. When it came to plotting a last lap move, I made a mistake with two laps to go and I had to arrive. It was really tough. I thought ‘should I make a big lunge into six?’ but he had such good traction through Turns 4 and 5 and along the back straight so it would’ve been too much. My mechanical traction from six was incredible. Parked the bike on the apex of Turn 7 and saw what I could do. He cut back again and then I thought about the chicane. Just go, park it on the apex, and try to cover my line. It was enough although I had a big slide at the last corner. I thought he was going to get me on the line, so I tried to make myself as small as possible. It was really, really exciting especially when you come out on top in a race like that.”

P2 – Alvaro Bautista (Aruba.it Racing – Ducati)
Bautista led most of the second half of the race before being overtaken by Rea in Turn 9 on the last lap.
The Spanish rider claimed his ninth consecutive podium meaning he is the only rider who has stand on the podium of all 2022 races.
He maintained his Championship lead, despite Rea recovering points on Sunday at Estoril.
“In the end, I got a gap to Jonathan and the other riders, so it was nice but on the last lap the battle with Jonny was good. He tried to pass me into Turn 7, and I was prepared for this. I recovered the position. In the chicane, I tried to close the door, I thought I closed it quite well, but he just opened the door on the entry and just put the bike in front of me on entry. That’s all. Then I had to change the line and there was a bit of a gap to him on the exit of the chicane. I was too far and especially on the last lap, in the last sector, it started to rain so I just made the last corner without feeling the rear tyre slide, so I couldn’t do what I did yesterday, but I am happy that we fought until the end for victory.”

P3 – Toprak Razgatlioglu (Pata Yamaha with Brixx WorldSBK)
Despite leading the race at points, Toprak Razgatlioglu (Pata Yamaha with Brixx WorldSBK) dropped back from the lead duo to settle for third place.
He claimed his 61st podium, equaling Frankie Chili and James Toseland.
He is third in the Championship standings, 52 points behind Bautista and 35 points behind Rea.
“For me a good race weekend as we are very strong. Race 2, I tried to fight for the win but after 10 laps, a big drop in the rear tyre and I started sliding a lot, especially in the final corner. I tried my best in all the races. Sometimes, we need luck, especially in the first race when on the straight, the Ducati passed me. In the Superpole Race, my small mistake means I almost crashed. Sometimes, I see the chequered flag and it’s not possible to see it first. We take good points in the Championship, and I hope at Misano, we’re fighting for the win.”

P4 – Alex Lowes (Kawasaki Racing Team WorldSBK)
Having fought for the podium after a difficult Friday and Saturday, Lowes took fourth place after running wide at Turn 1 on Lap 14.
He claimed his joint best result of the season so far.
“I’ve had a tough weekend. From the first practice, I did not feel comfortable with the bike and I was pretty slow. And then we made a big change after the first race for today. Obviously the weather went against us today. But in the Superpole Race, I chose the SC0 in the rear but I felt good. I’ve felt like the bike was working really well toward the end of the race. So I started in sixth position in the last race. I thought that if I made a good start maybe I could stay with the guys, at least for the first few laps. Unfortunately, in the last part of the race I started dropping off. But I can finish the weekend with some confidence and feeling positive.”

P5 – Andrea Locatelli (Pata Yamaha with Brixx WorldSBK)
Locatelli took fifth place as he finished just 0.077s ahead of Lecuona, his six consecutive top six finish.
The Italian rider is fourth in the Championship standings, trailing his teammate by 25 points away.
“In Race 2, we improved a lot the bike compared to yesterday and the gap was closer with the front group. For sure I made some mistakes in the first part of the race so I lost the opportunity to stay with Alex to fight for P4. But in the end, it was a positive weekend for my team and me.”

P6 – Iker Lecuona (Team HRC)
With his six place in Race 2, the Spanish Rookie made it a hat-trick of top six finishes for his first visit to Estoril.
He now stands in fifth place in the Championship standings, 8 points behind Locatelli.
“Overall, I’m very happy with two sixth positions and a fourth place in the Tissot Superpole Race. I think we made big steps on the race bike. I felt comfortable from Saturday morning with the bike. I knew we’re able to fight for those positions. I finished in sixth place very close from the first group, less than 9 seconds away.. We fought with Alex, we recovered on Locatelli. Very happy with the team because we made a big step up this weekend.”

Axel Bassani (Motocorsa Racing) had an eventful race as he moved up the order to claim a top seven finish. He now is the top Independent rider with 43 points.

Lucas Mahias (Kawasaki Puccetti Racing) did not take part in Race 2 after he sustained a fracture to his right fifth metacarpal bone following a crash in the Tissot Superpole Race.

The Pirelli Emilia-Romagna Round will take place from the 10th to 12th of June at the Misano World Circuit “Marco Simoncelli”.