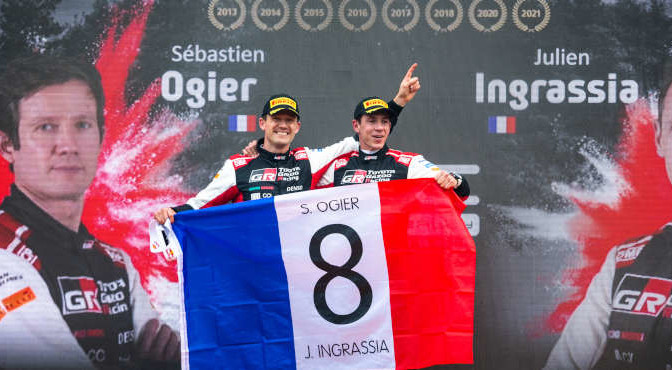 Eight-time World Rally Champion Sébastien Ogier will return to World Rally Championship to compete in the fourth round of the 2022 season: Rally De Portugal. The race is special to Ogier as it’s the site of his first career win and started a tally that so far has netted 54 WRC race wins. To celebrate his stunning career a feature-length documentary – The Last Season – is being released on 19th May. Here’s all you need to know:

- At the start of the 2010 WRC season, Ogier was given six races to prove he had what it took to compete in WRC and become a champion by Citröen. Just before the sixth race in Portugal, his contract was extended, which took the pressure off the Frenchman and he drove perfectly, taking the win. And the rest is history.

- For that reason, the Rally De Portugal holds a place in Ogier’s heart: “I have had some good results there and it’s a special rally for me,” said Ogier. “It’s where I won my first WRC event and the atmosphere there is special. It’s a race I really enjoy.”

- Also returning for the race is Ogier’s countryman, former teammate, and long-time rival Sébastien Loeb. Loeb was Ogier’s main rival for many years and the one driver he had to beat in his early career to prove he was World Champion material.

- After winning his eighth championship in 2021 and announcing his retirement from full-time WRC competition to spend more time with his family.

- Ogier is returning for the second time in 2022 after competing in the season opener at the Monte Carlo Rally, where he narrowly lost out to Loeb.

- Ogier explained “The rivalry has always been strong between me and Sébastien [Loeb], but more than that, we enjoy fighting with each other. For many years it was often pretty intense and there were close fights between us. I hope we can be competitive again and fight each other for the win – it will be fantastic.”

- Ogier will be back behind the wheel of his Toyota GR Yaris Rally 1 and competing for the team he won the title with last year – Toyota Gazoo Racing.

- The Frenchman has a fantastic chance to make it 55 Rally wins but will be up against Loeb again along with fellow Toyota Gazoo Racing teammate Kalle Rovanperä, who is currently leading the championship.

- “Kalle and I have worked well together for the last two years at Toyota. Straight away he showed strong potential. He’s now had the perfect start to this season and leading the championship,” said Ogier.

- Launching globally on the opening day of Rally de Portugal, The Last Season is an in-depth look at Ogier’s career and personal life. From his karting days as a junior driver to clinching the eighth title in 2021, the documentary leaves no stone unturned.

- Family, teammates, team owners and his fiercest rivals – headlined by Loeb – come together to create a portrait of one of the most relentless WRC drivers of all time.

- “It’s always an honour to have a documentary reliving your whole career and I’m obviously very happy to have it. And I hope the fans are going to enjoy it as well. It’s very cool!” Ogier concluded.

The Last Season will be released on May 19th at 9AM CET on Red Bull TV HERE.