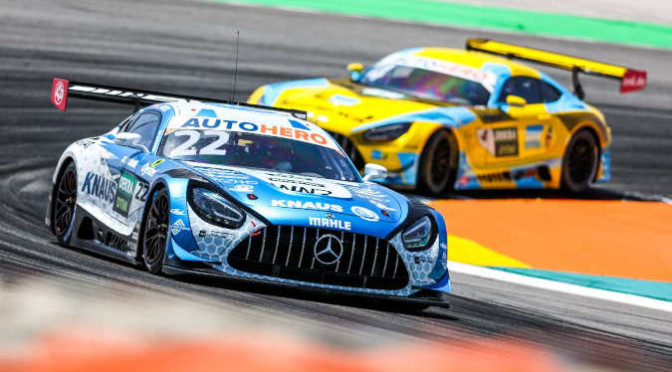 Respect from the world-class drivers in DTM is huge: for the spectacular Turn 1 and for the enormous balance in the record field. In spite of all the coolness, a certain tension prior to this weekend’s (20-22 May) event at Lausitzring Turn 1 powered by Autohero could be noticed during the press conference as well. For Lucas Auer, who scored his maiden DTM race win there in 2016 with the team led by Peter Mücke from Berlin and is now heading to Lausitz as the winner of the opening round at Portimão, the goal is clear: “I don’t want to be a one-hit wonder,” the Austrian says. However, team principal Peter Mücke only knows too well: “DTM is one of the world’s toughest championships, any prediction is absolutely impossible. From 1st to 29th place, anything is possible.”

Turn 1 is on the drivers’ minds in particular. Turn 1, the first corner of the 4.601 kilometres long race track near Klettwitz, slightly banked, exclusively reserved for DTM. The banking angle isn’t as large as in American banked corners, therefore, Turn 1 can’t be driven flat-out. “No, you can’t drive this corner flat-out, at least not fully flat,” Swiss Nico Müller, driving for Team Rosberg, knows from last year. But that is the difficulty: what does that mean? Where is the limit? These are the questions to which every one of the 29 drivers from 15 nations – DTM being more international than ever – has to find an answer. “Last year, I almost wetted my pants in that corner,” Audi driver Müller, the winner of the Sunday race at Portimão, admits. And Nicki Thiim (DEN), the son of DTM legend and former champion Kurt Thiim, who is in his maiden season in DTM, racing the Lamborghini Huracán run by the T3 Motorsport team from Dresden, uses the legendary words by German keeper Oliver Kahn to describe it: “There, you need balls!” And even more so because a record field of 29 cars from Audi, BMW, Ferrari, Lamborghini, Mercedes-AMG and Porsche will be roaring through this demanding corner, and that at a speed of almost 250 km/h!

Lucas Auer’s goal is to become established in the front-running group with his WINWARD Mercedes-AMG throughout the season with 16 races (“I would be happy with more”). “The important thing is to find one’s rhythm and find a clear lap in qualifying,” Auer says. Nico Müller, a two-time runner-up in DTM, has a slightly different view: “I would be really surprised when the same drivers would be in front all the time. The field is so strong, so balanced.” Nicki Thiim agrees with the Swiss: “The cars are very different, too, so that the races are guaranteed to be varied and well-mixed.”

The fair-haired Dane is full of excitement as the second DTM weekend is getting closer. “I love my life, my job and my challenge. I am living my dream in DTM and I am looking forward to Lausitzring.” Auer, meanwhile, is looking forward to many fans. “DTM is a great spectacle, with so many cars and a great sound. It will be sheer joy for the fans.” Peter Mücke is full of anticipation, too. After all, Mücke is the only team that is racing in DTM, in the DTM Trophy talent pool and in DTM Classic, among others with the spectacular Opel Calibra V6 that ex-Formula 1 world champion Keke Rosberg raced in the 1995 DTM. “It is a massive package for us, but we are always feeling comfortable at the wonderful Lausitzring,” the 75-year-old says.

Andrea Kaiser, presenter of DTM TV partner ProSieben, can hardly await the weekend either. “DTM is great, with 29 crazy characters. There, it is never boring. That is the best reason to watch the races,” Munich-based Kaiser says, already feeling a certain tension prior to a passenger lap through Turn 1 with the Red Bull Formula 1 two-seater.

Tickets are available from ten Euros, admission for children up to six years is free, children up to 14 years always just pay ten Euros. Tickets can be ordered at +49 1806 991166, tickets.dtm.com and for the first time also at eBay.de as well as at the ticket sales booths. The two DTM races, starting on Saturday and Sunday at 1.30pm CEST, are broadcast live on ProSieben (broadcast starts at 1pm CEST). Moreover, the streaming platforms ran.de, ServusTV On (servustv.com) and DTM Grid (grid.dtm.com) are showing the Lausitzring action almost completely.