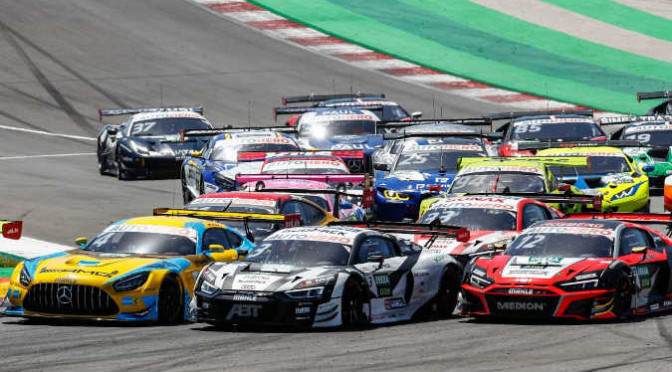 Spectacular motorsport is guaranteed: when the 29 world-class drivers with their race cars are roaring through the banked first corner, exclusively reserved for DTM, it will be tight at Lausitzring. Turn 1, with its light banking, is something special. A challenge for all, a breath-taking highlight for the fans. Two, three or sometimes even four abreast, the race cars from Audi, BMW and Mercedes-AMG as well as Ferrari, Lamborghini and, for the first time, Porsche will be taking on this magic first corner at around 250 km/h while the spectators have an excellent view of the action from the towering grandstand, 36 metres high.

The DTM drivers already staged the first battle of the season during the opening round at Portimão. With Austrian Lucas Auer driving the WINWARD Mercedes-AMG and Swiss Nico Müller with the Rosberg Audi R8, the start of the season produced two race winners with different brands right away. And what is more: in Mirko Bortolotti, an Italian with a fascinating Italian sports car, a Lamborghini Huracán from the Grasser Racing Team, is coming to Klettwitz as the first points’ leader following his second and third places in the season opener. The high-profile works driver is leading with 35 points from Müller (28), Auer (26), Kelvin van der Linde (RSA, 20) with the ABT Sportsline Audi R8 and Felipe Fraga (BRA, 19) with the Red Bull Ferrari 488. From the 29 drivers coming from 15 nations – the DTM being more international than ever before – almost everyone is a candidate for race wins. The best conditions, therefore, for an exciting continuation at Lausitzring Turn 1 powered by Autohero.

While defending champion Maximilian Götz (GER) with the WINWARD Mercedes-AMG, a race winner at Lausitzring last year, and two-time DTM champion Marco Wittmann (GER) with the Walkenhorst BMW M4 already scored their first points, the tally of three-time champion René Rast (GER, Team ABT Sportsline Audi R8), who has returned after a one-year absence as a driver, is still empty. For the first time, New Zealander Nick Cassidy is joining in the action as well, having let nine-time rally world champion Sébastien Loeb (FRA) race his AlphaTauri Ferrari 4889 at Portimão. On the back of a victory in the famous Bathurst 12 Hour, Luca Stolz (GER, HRT Mercedes-AMG) is coming straight from Australia to the second DTM race weekend.

Lausitzring Turn 1 is home territory for two DTM teams. Peter Mücke, an institution in motorsport in the east of Germany, is running a Mercedes-AMG with special Space Drive steering for Maximilian Buhk (GER) under the Mercedes-AMG Team Mücke Motorsport banner. Meanwhile, Mücke Motorsport is also competing in DTM Trophy and DTM Classic. The second team with home advantage is T3 Motorsport from Dresden. With Nicki Thiim (DEN), a two-time FIA endurance world champion, a driver capable of winning races is behind the wheel of the Lamborghini Huracán while Brit Esmee Hawkey, the only female driver in the field, is in her second season. Moreover, T3 team principal Jens Feucht is running two Audi R8s in DTM Trophy.

Lausitzring Turn 1 powered by Autohero is the first of four race weekends of the 36th DTM season in Germany. The DTM organisation ITR is offering a range of fan attractions at Lausitz, on and off the race track. While DTM as the top category is running its second season round, the talent pool DTM Trophy, the new DTM Classic Cup with fascinating cars from DTM days gone by and the entry-level one-make series BMW M2 Cup are starting their seasons at Lausitz with a double dose of racing action on Saturday and Sunday. Traditionally, the fan experience at Lausitz includes the pit walk, the pit view box, the show stage, events to become involved with chances to win prizes and Red Bull’s spectacular Formula 1 two-seater.

Tickets are available from ten Euros, admission for children up to six years is free, children up to 14 years always just pay ten Euros. Tickets can be ordered at +49 1806 991166, tickets.dtm.com and for the first time also at eBay.de as well as at the ticket sales booths. For citizens of Ukraine, admission is free upon presentation of a passport. The two DTM races, starting on Saturday and Sunday at 1.30pm CEST, are broadcast live on ProSieben (broadcast starts at 1pm CEST). Moreover, the streaming platforms ran.de, ServusTV On (servustv.com) and DTM Grid (grid.dtm.com) are showing the Lausitzring action almost completely.