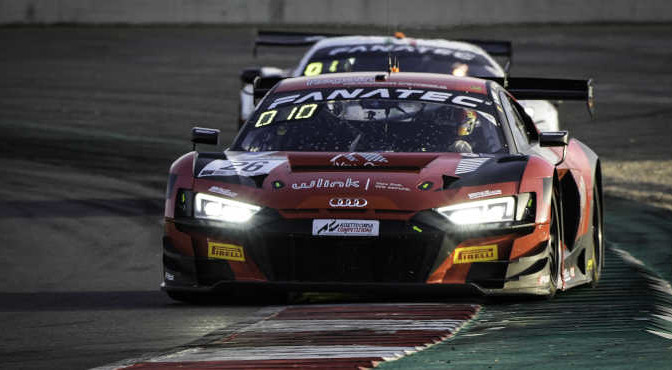 Nicolas Baert was able to savour the taste of victory in the GT World Challenge Europe for the first time this Saturday at Magny-Cours. Together with his team-mate Gilles Magnus the Brabant driver won the Silver category, not without adding a fine 6th place in the overall classification. On Sunday the duo in the Audi R8 LMS GT3 Evo II of Saintéloc Racing had a difficult day, but they learned a great deal.

Even if the Marseillaise was played on the podium in honour of their French team Saintéloc Racing, Nicolas Baert and Gilles Magnus carried the Belgian colours very high this Saturday evening in Magny-Cours. For their second race together in the Sprint Cup of the GT World Challenge Europe, the two young drivers, aged 20 and 22, took their first victory in the Silver category!

“What a great day,” smiled Nicolas with legitimate pride. “Congratulations to my team mate Gilles for his great qualifying. He produced a very good lap which put us in pole position amongst the Silver teams and in 3rd place overall. After that, we had a very intense race.”

After a start that propelled him to second place, Gilles managed to keep the Audi in the Comtoyou colours in the leading group overall and in control of the Silver Cup. “However, we lost a few places during the obligatory stop to change drivers,” explained Nico. “Without going into details, we know where we lost the three or four seconds which make the difference and we will work on these points. As a result, I found myself second in the Silver Cup when everyone else had made their stop. When the driver in front of me made a mistake, I was able to take advantage of it straight away and then maintain an extremely good pace, equivalent to that of Ulysse De Pauw’s Ferrari which was behind me. In my second race in the GT World Challenge Europe Sprint Cup I took my first class win! Gilles, who had already won in Silver on his first appearance in the championship in 2018, was as happy as I was on the podium and this was definitely an important day in my career.”

Motor sport is such that it can be an emotional lift. After the joy of Saturday, the two Belgians experienced a much more frustrating Sunday. “Not helped by less than optimal tyre pressure, I did not manage to set a good lap in qualifying,” said the former TCR Europe driver. “Then, during the race, I had an excellent start and gained five places. But I wanted to push to get back up and I went through the gravel trap at the first corner, losing a lot of time in the process. In the end we finished 16th and in 7th place in the Silver Cup, which still gave us some valuable points.”

Beyond the disappointment, Nicolas analyses his day on Sunday with great lucidity. “Honestly, I think I put too much pressure on myself after Saturday’s victory,” he humbly admits. “A member of the team told me that you have to learn to win and I understand better what he meant: you have to deal with what happens afterwards. I wanted to do as well as we did on Saturday and I forced myself somewhat, and that had the opposite effect. But that is part of the learning process! Next time I will approach things differently. In the meantime, I will have the opportunity to learn new things at the next race of the championship. With the Circuit Paul Ricard 1000 Km, on Saturday 4 June 2022, we will return to an Endurance format with a 6-hour race ending at night. It will be a new experience and I am very much looking forward to it!