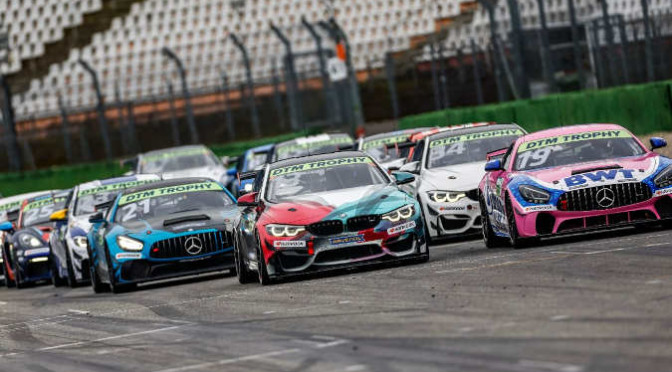 The appeal of the DTM is also effective in the talent pool that is DTM Trophy: drivers from eleven nations fill the grid for the season opener at Lausitzring Turn 1 powered by Autohero this weekend (20-22 May). 20 production-based GT sports cars from six automobile manufacturers, Aston Martin, Audi, BMW, Mercedes-AMG, Porsche and Toyota will be starting for the first two of the 14 races of the 2022 DTM Trophy on Saturday and Sunday at 3.15pm CEST.

“The DTM Trophy field is not only international, but also high-class. The pre-season test at Hockenheim already gave a first indication of how closely together the field is and how hard-fought this series will be,” says Martin Tomczyk. As DTM representative brand & sports at the DTM organisation ITR, the former DTM champion has been responsible, among others, for the DTM Trophy series’ management since the beginning of this year. “That the DTM Trophy, first held in 2020, has such a high international status, can basically be explained by the appeal of the professional DTM platform. Moreover, DTM Trophy and DTM share the same DNA: one driver, one car. That is making both series so unique.”

The talent pool DTM Trophy will be broadcast live in its third season as well. The new partner ServusTV is showing all the 14 races live on its video and streaming platform ServusTV On (servustv.com) while both races from Lausitz will be shown on the ServusTV television programme on Saturday from 4.50pm till 5.35pm and on Sunday from 4.55 till 5.40pm CEST.

With eight drivers, Germany has the largest contingent while three drivers are coming from the US and one each from Australia, Bulgaria, Brazil, Spain, Finland, France, Mozambique, The Netherlands and South Africa. As the only female driver in the field, Sophie Hofmann (GER) is taking on her second season. Remarkable: from the BMW M2 Cup, the entry-level one-make series on the DTM platform, four drivers have made the step up to DTM Trophy: Louis Henkefend (GER) as the Cup title winner as well as Colin Caresani (NLD), Nick Hancke (GER) and Rodrigo Dias Almeida (Mozambique).

Two drivers from the 2022 field already have scored race wins in DTM Trophy: the first one the only 17-year-old Theo Oeverhaus (GER) who will continue to race a BMW M4 run by Walkenhorst Motorsport, and the second one Tim Heinemann (GER), the inaugural DTM Trophy champion, who will be racing the Ring-Racing Toyota Supra. Just like Moritz Löhner (GER), Heinemann is one of the drivers to have made a successful switch from sim racing to real-world motorsport. Löhner, the 2021 DTM Esports champion, scored two podium results in the 2021 DTM Trophy and will unalteredly be racing a BMW M4 run by FK Performance Motorsport this season. Ben Green, the 2021 DTM Trophy champion, completed a test with the Mercedes-AMG of the HRT team at Portimão, putting himself forward for a DTM drive in 2023.

That the DTM platform not only has a high prestige but also offers valuable synergy effects, is something no less than four teams from DTM are using this season. Next to Walkenhorst Motorsport (BMW), KÜS Team Bernhard (Porsche), BWT Mücke Motorsport (Mercedes-AMG) and T3 Motorsport (Audi) are competing in both DTM and DTM Trophy for the first time.