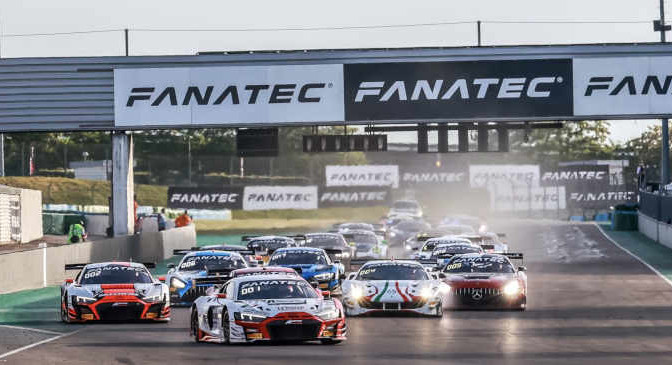 Team WRT bagged its first Sprint Cup win of the 2022 season in this evening’s race at Magny-Cours thanks to a lightning-fast stop that allowed the #32 Audi to snatch the lead during the pit window.

Dries Vanthoor and Charles Weerts earned their eighth win as a duo, moving to the top of the standings in the process, with the time gained on pit road proving crucial to their success. It was a superb evening for Audi Sport, with five of its new-spec R8 machines finishing among the overall top-six and Saintéloc Junior Team adding Silver Cup honours.

Simon Gachet took the start from pole in the #11 Tresor by Car Collection Audi and immediately pulled clear of the field, accelerating away at the exit of the final corner while his rivals seemed to hesitate before following suit. Weerts lost second spot to Gilles Magnus (#26 Saintéloc Junior Team Audi), while Pierre-Alexandre Jean held fourth in the #53 AF Corse Ferrari.

There was opening-lap action behind the leading quartet as Timur Boguslavskiy (#89 Akkodis ASP Mercedes-AMG) muscled past the sister #87 machine of Thomas Drouet, taking fifth in the process, while another Akkodis ASP car was also on the move as Jim Pla jumped from 10th to eighth in the #88 entry.

The race settled down thereafter, with Gachet maintaining a lead of around two seconds at the head of the field. Weerts initially seemed to struggle for pace, but once he found his rhythm the Team WRT man had the edge over Magnus. He closed on to the rear of the #26 car and capitalised on a small error to make the move before the 20-minute mark.

By this time Gachet’s lead had grown to almost four seconds, but in clean air Weerts was able to close the gap by a few tenths each lap. With the pit window drawing closer the Belgian driver got within 2.5 seconds of the rival Audi, then ducked in for an early stop. He was followed by Magnus, Jean and Boguslavskiy, with only Gachet electing to run an extra lap.

The Team WRT crew produced an astonishingly fast turnaround that gave Vanthoor a clear advantage over his rivals, while Akkodis ASP did enough to send Raffaele Marciello out ahead of both the #26 Audi and the #53 Ferrari. Gachet stopped a lap later in the #11 Audi, but despite the best efforts of the Tresor by Car Collection crew Christopher Haase emerged just shy of Vanthoor. The pit stop had made the difference.

Despite some initial pressure Haase could not do anything about Vanthoor. The German looked to be relatively safe in second spot, with Marciello five seconds back in the #89 Mercedes-AMG, but the Swiss driver immediately pumped in a new fastest lap and continued to reduce the deficit thereafter. With 10 minutes left on the clock Marciello drew alongside the Audi on the run to the Imola chicane and held his nerve to complete the pass.

There was no such trouble for Vanthoor. The #32 enjoyed a simple run to victory, taking the chequered flag three seconds clear of Marciello, while Haase ensured that Tresor by Car Collection scored its maiden series podium. The #25 Saintéloc Junior Team Audi of Patric Niederhauser and Aurélien Panis was fourth, while the #12 Tresor by Car Collection entry completed the top-five after an excellent showing moved Mattia Drudi and Luca Ghiotto up eight places from 13th on the grid.

The #26 Saintéloc Junior Team Audi of Magnus and Nicolas Baert took sixth and captured Silver Cup honours in the process. After running at the front during the opening stint the car slipped back during the second half of the race, but Baert withstood considerable pressure from Ulysse De Pauw (#53 AF Corse Ferrari) to seal class honours and make it five Audi runners in the top-six. The #87 Akkodis ASP Mercedes-AMG of Drouet and Casper Stevenson was eighth overall and completed the Silver Cup podium, while the #33 Team WRT Audi and the #88 Akkodis ASP Mercedes-AMG rounded out the top-10.

Garage 59 secured Pro-Am honours, continuing what has thus far been a dominant weekend for the British squad. Miguel Ramos took the start from pole and held his advantage during the opening stint before handing over to Dean MacDonald. The Scottish driver did more than enough to finish the job, coming home 12 seconds clear of the #111 McLaren. The JP Motorsport-run car ran second in class throughout the race with Patryk Krupinski and Christian Klien, while the #21 AF Corse Ferrari completed the Pro-Am podium.

All 24 starters finished this evening’s race, which featured no significant collisions or off-track excursions. As such there should be no major repair work required ahead of qualifying 2 at 09:35 CEST on Sunday. This will set the grid for the weekend’s second contest, which gets underway at 15:00. Vanthoor and Marciello will both chase pole tomorrow morning, hinting at another clash between Team WRT and Akkodis ASP in what is already developing into a titanic Sprint Cup title battle.