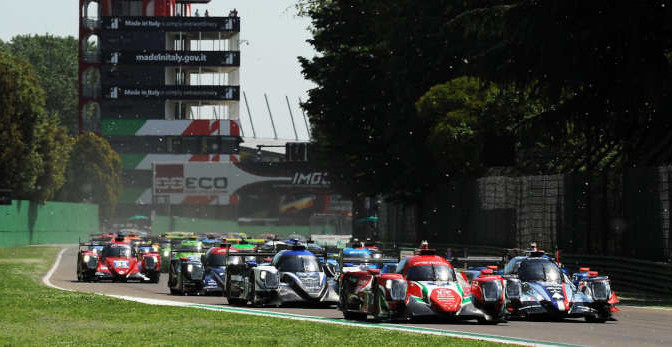 The win for the no9 Oreca didn’t come easily after two early penalties for a jump start and then crossing the pit exit line pushed Lorenzo Columbo down the order. However, a quick pitstop under Full Course Yellow put the Italian team back at the front.

Another penalty for Ferdinand Habsburg dropped the car back down the order again and a top five finish was on the cards before another fortuitous Full Course Yellow with 25 minutes to go put Louis Deletraz back to the front of the field following a quick pitstop.

The LMP2 podium was completed by the no37 Cool Racing Oreca, with Yifei Ye, who had been looking good for the victory prior to the FCY, finished just ahead of the no65 Panis Racing Oreca of Job Van Uitert.

The no34 Racing Team Turkey Oreca was the top LMP2 Pro-Am car for the second time in a row, with Jack Aitken crossing the line in 7thoverall, three places ahead of Mathias Beche in the no31 TDS Racing X Vaillante Oreca, which finished 2ndin Pro/Am after starting the race from the pitlane.

The LMP3 win went to the no3 United Autosports Ligier with Kay Van Berlo finishing well ahead of the two Cool Racing Ligiers, with the no27 Ligier of Antoine Doquin finishing ahead of the no17 Ligier of his Danish teammate Malthe Jakobsen.

The no14 Inter Europol Competition Ligier of Mateusz Kaprzyk was lying in second place but with just six minutes left on the clock, the Polish driver ended up in the gravel at Turn 3, promoting the two Cool Racing Ligiers that were behind him at the time.

History was made in the LMGTE Category with the first win for an Omani flagged team in ELMS history. The no69 Oman Racing with TF Sport Aston Martin Vantage of Marco Sorensen took the chequered flag after the car, which had been started by Ahmad Al Harthy, lead for almost the entire race distance.

It was a 1-2 for the team with the no95 Oman Racing with TF Sport Aston Martin Vantage AMR finishing second after Henrique Chaves took the flag nearly a minute behind his teammate.

The next round of the 2022 European Le Mans Series is the 4 Hours of Monza on Sunday 3 July.

·The race started with #31 TDS Racing X Vaillante Oreca starting from the pitlane after not getting out to the grid before the pit exit closed.
·The #9 Prema Racing Oreca of Lorenzo Colombo got into the lead at the first chicane ahead of the #88 AF Corse Oreca of Francois Perrodo
·The #65 Panis Racing Oreca of Julien Canal passes the #88 AF Corse Oreca for second on Lap 3
·#28 IDEC Sport (Paul Lafargue) given a drive through penalty for speeding in the pitlane on the installation lap.
·The #37 Cool Racing (Niklas Kruetten) up to 3rdahead of the #88 AF Corse.
·Lap 7 SAFETY CAR due to #6 360 Racing (Terrence Woodward) in the barriers at T7.
·After 7 minutes the race goes GREEN
·#37 Cool Racing challenging #65 Panis Racing for 2nd, side-by-side at T1/T2.Kruetten has to take to the gravel to avoid a collision and is passed by the #22 United Autosports (Duncan Tappy).
·Lap 15 – #65 Panis Racing spins at T15 dropping from 2ndto 10th.
·Lap 16 – #24 Nielsen Racing (Ben Hanley) passes #47 Algarve Pro Racing (John Falb) for 7thafter Hanley had to start the race at the back of the grid after not setting a time in qualifying.
·Lap 20 – Drive Through penalty for #9 Prema Racing (Lorenzo Colombo) for not respecting the formation at the start of the race.Colombo pits under green to serve penalty with several of the front runners also pitting for their first fuel stop.
·FULL COURSE YELLOW – to recover the stranded #32 Rinaldi Racing Ferrari at T7/T8
·#9 Prema Racing Oreca pits under FCY for fuel and rejoins in the lead of the race.
·GREEN – #9 Oreca is 25 seconds ahead of #37 and 35 seconds ahead of #22.
·#47 Algarve Pro Racing (John Falb) off ay T5 after contact with an LMP3 car.
·SAFETY CAR to recover #47 with 3hours and 5 minutes left on the clock.
·GREEN after 13 minutes
·#9 Prema Racing given a second Drive Through Penalty for crossing the white line on pit exit.This drops Lorenzo Colomba down to 9th
·FULL COURSE YELLOW – At 2 Hours and 41 Minutes on the clock another FCY period to recover #5 RLR MSport and #18 Absolute Racing Porsche after contact at T2.
·Racing resumes at 2h32m
·Lap 43 Nicolas Lapierre is leading in the #37 Cool Racing Oreca, 4 seconds ahead of Nicolas Jamin in #65 Panis Racing Oreca and #22 United Autosports Oreca (Phil Hanson)
·#9 Prema Racing (Ferdinand Habsburg) closes on leading group but goes off onto the grass while challenging for 3rd, dropping back to 6th.
·Lap 50 – #88 AF Corse into garage with broken wishbone
·Lap 62 – #9 take #28 IDEC Sport (Patrick Pilet) for 4that T2 after side-by-side battle earlier in the previous lap.
·Lap 86 #37 Cool Racing (Lapierre) leading #9 Prema Racing (Habsburg) by 14 seconds
·FULL COURSE YELLOW after #51 Team Virage (Gabriel Aubry) and #31 TDS Racing X Vaillante (Philippe Cimadomo) collided at T10.
·After 7 Minutes Race goes GREEN
·#65 Panis Racing (Job Van Uitert is leading from #37 (Yifei Ye) with #9 Prema Racing (Louis Deletraz) in 3rdahead of #28 IDEC Sport (Paul Loup Chatin) and #22 United Autosports (Tom Gamble).
·Jack Aitkin is leading the LMP2 Pro/Am in the #34 Racing Team Turkey Oreca in 6thoverall.
·Lap 110 #37 Cool Racing passes #65 Panis Racing for lead. The two cars stop on the next lap and the #37 Cool Racing Oreca retains lead just ahead of #65 Panis Racing
·#21 Muehlner Motorsport (Thomas Laurent) ends up in the gravel at T2 after contact with #30 Duqueine Team (Richard Bradley).
·FULL COURSE YELLOW – #9 Prema Racing and #22 United Autosports take their last pitstop under FCY and leap frog the #37 and #65. #19 Algarve Pro Racing (Sophia Floersch) takes her last stop under FCY and rejoins in 5th.
·GREEN with 17 minutes left on the clock.
·#65 Panis Racing challenging #37 Cool Racing for 3rdbut Yifei Ye holds the position.
·8 Minutes to go. #19 Algarve Pro Racing (Sophia Floersch) heads to the pitlane with a puncture. Rejoins in 8thplace.
·6 minutes to go – #14 Inter Europol Competition Ligier (Mateusz Kaprzyk) off into the gravel at T3 from 3rdin LMP3
·FULL COURSE YELLOW to recover #14
·GREEN with 1 minute to go
·CHEQUERED FLAG – #9 Prema Racing wins the 4 Hours of Imola ahead of the #22 United Autosports, with #37 Cool Racing in third.#34 Racing Team Turkey take Pro-Am win in 7thoverall.

·#17 Cool Racing (Maurice Smith) leads at the start with #14 Inter Europol Competition (Noam Abramcyzk) challenging for the lead.
·#27 Cool Racing Ligier (Jean-Ludovic Foubert) off at T1 but quickly rejoins at the back of the field.
·Lap 2 – #14 Inter Europol Competition takes the lead ahead of #17 Cool Racing.
·3H51M – SAFETY CAR to recover #6 360 Racing (Terence Woodward) which had gone off into the barriers at T7
·#13 Inter Europol Competition (Charles Crews) in the pits and in the garage after sustaining damage after contact with #33 Rinaldi Racing Ferrari.
·3H44M – GREEN
·Lap 15 – #14 leading #17 by 23 seconds with #15 RLR MSport Ligier of Austin McCusker closing on the #17 Ligier.
·#15 RLR MSport overtakes #17 for 2ndand then inherits lead as #14 pits under first FULL COURSE YELLOW.
·3H05M – SAFETY CAR to recover #10 Eurointernational Ligier (Adrien Chila) that went off at T7
·2H52M – GREEN
·2H42M – #15 RLR MSport (Austin McCusker) given a drive through penalty for overtaking before the end of the Safety Car period.
·2H41M – FULL COURSE YELLOW to recover #5 RLR MSport and #18 Absolute Racing Porsche after contact at T2.
·2H32M – GREEN
·After the pitstops under FCY the #3 United Autosports (Andrew Bentley) now leading ahead of #14 Inter Europol Competition (James Dayson) with #7 Nielsen Racing (Tony Wells) in third.
·#17 Cool Racing in 5thplace with Malthe Jakobsen at the wheel and closing on leaders.
·#3 United Autosports (Kay Van Berlo) holding an 80 second lead going into final hour of the race.
·6 minutes to go – #14 Inter Europol Competition Ligier (Mateusz Kaprzyk) off into the gravel at T3 from 3rdin LMP3
·FULL COURSE YELLOW to recover #14
·This promotes #27 Cool Racing (Antoine Doquin) to second and #17 Cool Racing (Malthe Jakobsen) to third behind the #3 United Autosports (Kay Van Berlo).
·Race goes GREEN for 1 minute before the chequered flag is shown.

Ferdinand Habsburg #9 Prema Racing Oreca 07-Gibson:“While we were racing in the lovely country of Italy, with a lot of obstacles in the way a lot of chicanes literally and metaphorically. Our car was extremely fast, our pace was incredible, and the team did a fantastic job; that’s one of the reasons why we won.

“But on the other hand, we had some mistakes on the way we had a couple of drive throughs, things that we need to look at to improve. Then at the end, God came to save us, my prayers came true and he gave us a full course yellow, just when we needed to allow us to come back to where we felt we should be with our pace. In the end, we get to have champagne, we get to have trophies, we get to thank God and go to church today, for sure for the three of us, because a lot of luck was definitely involved today. But sometimes you need to take it and sometimes you need to earn it.”