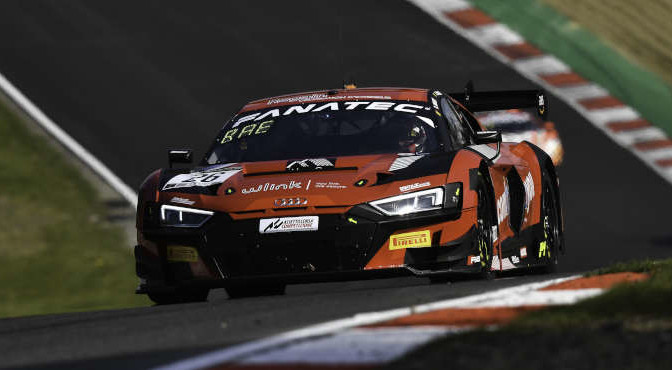 Four weeks after the start of the GT World Challenge Europe Endurance Cup at Imola, Nicolas Baert started his Sprint Cup campaign at Brands Hatch. Teaming up with his compatriot Gilles Magnus in the Audi R8 LMS GT3 Evo II of Saintéloc Racing, the young Belgian had a complicated start to his campaign. However, the points scored in the Silver Cup thanks to the 4th and 7th places and the lessons learnt are encouraging signs for the rest of the season.

Just like the very hilly Brands Hatch circuit itself, Nicolas Baert experienced a weekend of ups and downs for the launch of the GT World Challenge Europe Sprint Cup. For his first collaboration with his friend Gilles Magnus in the #26 Saintéloc Racing Audi R8 LMS GT3 Evo II, the man from Waterloo knew that the task would be difficult.

“Clearly, we expected this to be the most complicated weekend of our season,” Nicolas admits straight away. “On the one hand because it was the first of the Sprint Cup events and therefore a discovery of the championship and its specific features. But, above all, the Brands Hatch circuit is a monument! It is often very fast, it is narrow and there is no room to make up for any mistakes. You have to be totally confident to go fast here. But when you discover it, it is not easy.”

It was even more complicated as a power steering problem deprived the Belgian duo of a good part of the first free practice session. In qualifying Gilles Magnus managed to limit the damage with a 7th place – 2nd in the Silver Cup – on the starting grid. However, the Antwerp driver had a scare when he went off the track at the end of the session.

“Fortunately the car, which stopped in the gravel trap, was not affected and I was able to run my qualifying session,” continued Nico. “But with all the professional drivers competing in this second session and with average confidence, I could not do better than 20th.”

The first race on Sunday started ideally with Gilles Magnus holding on to second place in the Silver Cup. But the compulsory pit stop did not go well… “We lacked experience and we lost time in all phases of the stop,” explained the former TCR Europe Junior Champion. “Coming into the pit lane, then because our wheels were not perfectly straight and that slowed our mechanics finally coming out of the pit lane.”

Finally 11th overall and 4th in the Silver Cup, Gilles and Nicolas could have some regrets. But that was nothing compared to the second race. “I was on the outside line at the start and I had to go wide to avoid two competitors at the second turn,” said a slightly disappointed Nicolas after the finish. “I lost some places and then we collided with a Lamborghini. It was very frustrating, especially as the front splitter was damaged and our Audi lost grip in the corners

However, Nicolas and Gilles scored the points for 7th place in the Silver Cup by climbing up to 18th place overall. “Although I am disappointed, I tell myself that it is better than nothing,” Nico said. “It Is not easy to shine in such a competitive championship and it is even more difficult when you have a weekend like this. But we all know that this learning process is unavoidable. In ten days’ time we will be at Magny-Cours for the second meeting of the Sprint Cup. And we intend to aim for the podium in the Silver Cup!”