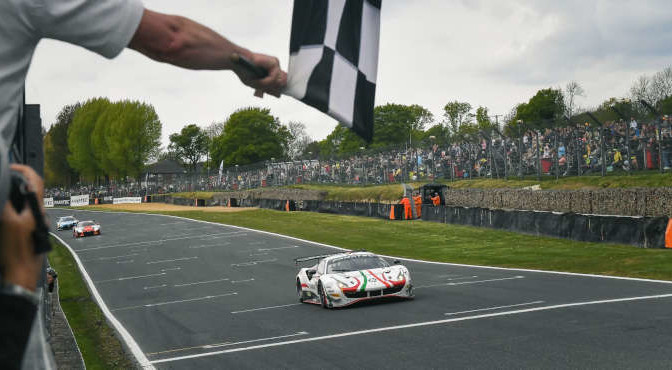 AF Corse kicked off the Sprint Cup season with a sensational overall victory at Brands Hatch thanks to a mature performance from Ulysse De Pauw and Pierre Alexandre Jean in the #53 Ferrari.

Making their debut with the Italian squad, the young Silver Cup duo had already caused an upset by bagging pole for the opening 60-minute contest. De Pauw continued the good work by acing the start, getting the jump on Jules Gounon in the #88 Akkodis ASP Mercedes-AMG to lead into Paddock Hill Bend. There was drama behind, however, as the #86 Akkodis ASP Mercedes-AMG of Igor Walilko made contact with the #33 Team WRT Audi of Jean-Baptiste Simmenauer approaching Paddock.

The former spun into the grass on the inside of the circuit, while the latter lost control and speared the sister #30 Team WRT machine driven by Benji Goethe, causing race-ending damage to both cars. Walilko continued, but was judged to be at fault for the incident and was handed a 10-second stop-go penalty.

Further back, the #54 Dinamic Motorsport Porsche put two wheels in the gravel while attempting to pass the #38 JOTA McLaren. Adrien de Leener lost control of the Porsche and spun into the same spot as the stricken WRT machines, albeit as a result of a separate incident. All three were eliminated from the running, while the race was neutralised by the safety car.

It was a little over 10 minutes before the action resumed and, once again, De Pauw was in control. The Belgian edged away from Gounon, adding a few tenths each lap and surviving a small mistake that saw the Ferrari drift into the gravel exiting Paddock. Behind him, Gounon had Mattia Drudi (#12 Tresor by Car Collection Audi) filling his mirrors, while Charles Weerts had moved his #32 Team WRT Audi ahead of Timur Boguslavskiy (#89 Akkodis ASP Mercedes-AMG).

By the time De Pauw stopped to hand over to Jean the #53 Ferrari had built enough of a lead to survive a slower stop than its rivals. Jean emerged ahead of Dries Vanthoor in the #32 Audi, while Luca Ghiotto (#12 Audi) briefly ran ahead of Raffaele Marciello only for the #89 Mercedes-AMG to make a commanding pass. Gounon ran the longest, but a problem during the stop compromised the #88 car and left Jim Pla fourth once the pit window had closed.

The story of second stint was traffic, with Jean looking to minimise time loss as he cut through lapped cars. This gave Vanthoor an opportunity to close the gap, though the Belgian driver had to watch his mirrors as Marciello loomed large. Indeed, the #89 Mercedes-AMG was Jean’s best friend at this stage of the race, with Marciello’s presence preventing Vanthoor from taking any risks.

Nevertheless, the final laps were visibly tense in the #53 Ferrari box as Vanthoor closed to within a second of Jean. The Audi did not make a serious attempt, however, and Jean took the chequered flag to score a sensational win, only the fourth time in more than 100 Sprint Cup races that a Silver crew has triumphed overall. It also represented the first overall Sprint Cup win for a Ferrari since 2015 and AF Corse’s first-ever triumph in the short-format championship.

There was jubilation in parc fermé when Jean brought the car to a stop, with both drivers clearly overjoyed to have scored a breakthrough victory. The #32 Team WRT and #89 Akkodis ASP crews were content with the result, too, both satisfied to have banked points in the season-opening contest.

Pla was fourth in the #88 Akkodis ASP Mercedes-AMG, followed by a trio of Audi entries. The #25 from Saintéloc Junior Team was the best of them, while Luca Ghiotto just edged Christopher Haase in the battle of the Tresor by Car Collection teammates. Eighth overall and Silver Cup runner-up went to the #87 Akkodis ASP Mercedes-AMG, while the #99 Attempto Racing Audi completed the class podium in P10.

The #21 Ferrari completed a perfect day for the AF Corse squad as Hugo Delacour and Cedric Sbirrazzuoli clinched Pro-Am honours. The pair started from class pole and were unchallenged during the second half of the race, finishing 16 seconds clear of the #111 JP Motorsport McLaren. The #52 AF Corse Ferrari was third in class, ensuring that all three of the Italian squad’s entries stood on the podium after the opening encounter.

The second part of this today’s Brands Hatch double-header gets underway at 16:45 and will see Marciello start from pole at the wheel of the #89 Akkodis ASP Mercedes-AMG. Coverage will be available across a variety of free-to-view online platforms, including the GT World YouTube channel, while live TV options include Sky Sports broadcasts in the UK, Italy and Germany.