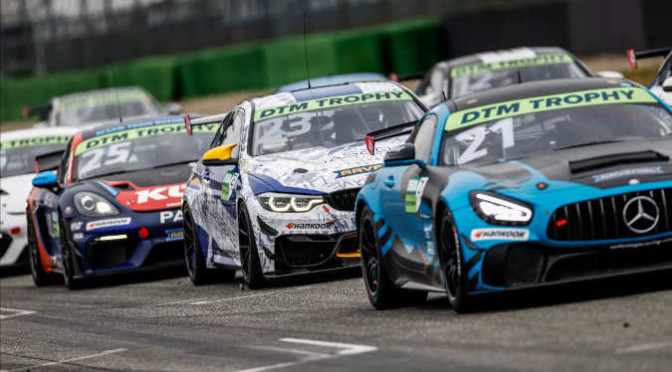 Only 16 years young and the fastest already: German Daniel Gregor came out on top at the end of the official DTM Trophy test day at Hockenheimring. With the Porsche 718 Cayman, the rookie driver of the KÜS Team Bernard, the team of former endurance world champion and Le Mans winner Timo Bernhard, posted the fastest time of 1m 48.350s around the 4.574 kilometres long Grand Prix circuit. In cold, but ideal weather conditions, German Theo Oeverhaus (1m 48.473s), only one year older, ended up second with the Walkenhorst Motorsport BMW from his 18-year-old fellow BMW driver Colin Caresani (Project 1/1m 48.611s) from The Netherlands.

“That was a good test day for us with both cars. We acquired a lot of insight,” team principal Timo Bernhard said. “Of course, I am happy with the result, particularly for Daniel Gregor. He has already been driving for us since he was 13, still in karting back then. I rate him as a top talent.”

With three young drivers at the top of the timing sheets, this test day already underlined the role of the DTM Trophy as a talent pool. While Gregor is embarking on the season as a rookie, Oeverhaus already secured his maiden win last year while Caresani concluded the test day as the fastest graduate from the ranks of the BMW M2 Cup, the entry-level one-make series on the DTM platform.

With German Nick Hancke, another M2 Cup graduate ended up in fourth place; with the Aston Martin Vantage run by the Speed Monkeys team, the 22-year-old completed his fastest lap of the Hockenheimring in 1m 48.727s. The best driver with previous experience of the series was 24-year-old German Tim Heinemann, the inaugural DTM Trophy champion in 2020. With the Ring-Racing Toyota Supra, he was classified fifth (1m 48.808s), ensuring that drivers from four of the six brands were represented among the first five positions.

“That was a successful start of the season. This test day went perfectly, the weather may have been cold, but all in all, it was ideal to post good lap times and to collect many data,” Martin Tomczyk, series’ manager of the DTM organisation ITR, was satisfied. “There was a lot of driving going on in the two sessions in the morning and in the afternoon, most teams made full use of this test day until the final minute. The young drivers in particular were very ambitious.”

The most prolific driver of the day was Theo Oeverhaus with 111 laps followed by Moritz Löhner (99) with the FK Performance BMW and American Alexandre Papadopulos (93) with the Selleslagh Racing Team’s Mercedes-AMG.

In 2022, the DTM Trophy includes 14 sprint races on the DTM platform, the season opener is at DEKRA Lausitzring Turn 1 from 20 till 22 May.