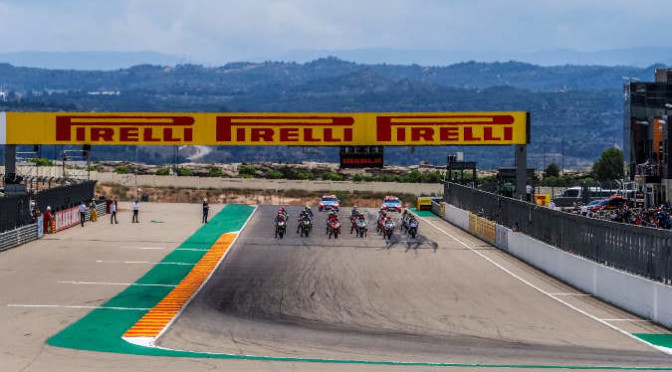 As in 2021, Pirelli will be the Event Main Sponsor of the inaugural round of the new season, with the Pirelli Aragon Round kicking off the 2022 MOTUL FIM Superbike World Championship on April 8th-10th.

Pirelli has been the exclusive Official Tyre Supplier of the Championship since 2004 and since 2020, all classes has been using exclusively DIABLO™ Superbike slick tyres. Pirelli also supplies the Yamaha R3 bLU cRU European Cup as part of the SBK Roadway initiative.

The Pirelli Aragon Round will be preceded by two days of testing at MotorLand Aragon on Monday 4th and Tuesday 5th of April. All three categories will take to the track as a final preparation ahead of the 2022 start.
What to look out for in Aragon

Pata Yamaha with Brixx WorldSBK
2021 WorldSBK Champion Toprak Razgatlioglu heads into the first round of 2022 as one of the favourites, determined to repeat his title success and will be one to look out for in 2022: “We are working nonstop and also; we are fighting again and we are ready to fight this season.” Having claimed several podium places in 2021, Andrea Locatelli’s illusive first win might just be around the corner.

Kawasaki Racing Team WorldSBK
After missing out on a seventh WorldSBK title, Jonathan Rea wants to make 2022 the season he reclaims the title: “We’ll just try to learn from a difficult 2021 and learn from our mistakes… we made too many mistakes last year, myself as a rider and also on the team’s side. It’s exciting to have many rivals, so many guys in WorldSBK can be on the podium.” Teammate Alex Lowes will aim to return to winning ways after missing out in 2021, and last year claimed three podiums at Aragon.

Aruba.It Racing – Ducati
Alvaro Bautista will have his first round back in red, having switched back to Ducati from HRC. After a strong off-season his objective is clear, to claim the 2022 title “With such a competitive team and machine, obviously the goal is to fight for the title. I have more experience, I know the tyres and the format of the competition better, but it will still be crucial to learn from the mistakes of three years ago.” Michael Ruben Rinaldi, who is known to be strong in Aragon, will aim to start 2022 on a high and repeat his success at the venue in 2020 when running as an Independent Ducati rider.

BMW Motorrad WorldSBK Team
The Pirelli Aragon Round will mark Scott Redding’s race debut with the BMW Motorrad WorldSBK Team and the M 1000 RR, having switched to the German manufacturer for 2022. He will want to take the BMW M 1000 RR to the front of the field: “We have a good bike, but it just needs to be fine-tuned to do a little bit more and this is the goal for me. By the end of the season, we can be fighting for victories.” There will be further information on teammate Michael van der Mark provided after the Dutchman suffered a training injury which has forced him out of the Misano, Catalunya and Aragon tests.

Team HRC
The team led by Leon Camier heads into 2022 with a brand-new line-up as they will bring in Iker Lecuona and Xavi Vierge. Both rookies will aim to adjust to the category, whilst Vierge is still recovering from a fracture to his twelfth rib following a crash in Barcelona’s test. Additionally, Team HRC has switched suspension manufacturers from Öhlins to Showa and brake brands too, Brembo to Nissin. Lecuona was optimistic after the Catalunya test: “We showed the speed and the level to fight for a top position. When I arrive in Aragon, we will see what happens. For sure, it will change a little bit the position, but the important thing is we can go fast and it’s very important for me and the team.”

The Independents
Other names to look out for in 2022 include GYTR GRT Yamaha WorldSBK Team’s Garrett Gerloff and Motocorsa Racing’s Axel Bassani. Gerloff will be looking to bounce back from a rollercoaster 2021 while Bassani will hope to build on his impressive rookie season last year.

Podium finisher Loris Baz is back in WorldSBK with the Bonovo Action BMW team, with 13-time WorldSBK winner Eugene Laverty joining the team.