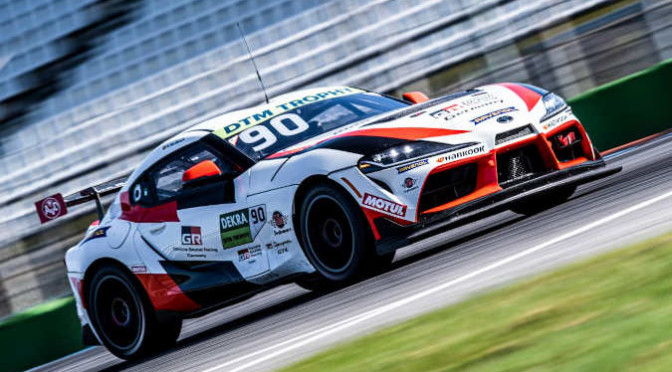 Three years DTM Trophy, three years Ring-Racing, three years with Toyota: the team from Boxberg near the Nürburgring will also be participating in the 2022 DTM Trophy and is again relying on Toyota for its campaign. New in the team, however, is the driver. Tim Heinemann, who concluded the inaugural season in the talent pool on the DTM platform by winning the title after a commanding performance in 2020, will be driving the Toyota Supra in the 14 sprint races of the 2022 season. The DTM Trophy gets its third season underway at DEKRA Lausitzring Turn 1 from 20 till 22 May.

Like in the previous years, Toyota is contributing to the brand variety in DTM Trophy. Next to Aston Martin, Audi, BMW, Mercedes-AMG and Porsche, the Japanese car manufacturer is the sixth brand to be represented with a production-based GT sports car in the high-class series in the direct environment of DTM. “It is a real asset that Toyota is present again, once more with the experienced Ring-Racing team,” says Martin Tomczyk, series’ manager of the DTM organisation ITR. “And Tim Heinemann knows how to win races and titles.”

For Uwe Kleen, the repeated participation is logical: “We had a good time in DTM Trophy in the two past years and the level in this series is very high,” the Ring-Racing team principal says. “Our goal is to get better yet again and finish on the podium as often as possible over the year. With Tim Heinemann, we have a driver who knows how to do that.”

Tim Heinemann, an accomplished sim racer who was one of the first virtual racing drivers to make the step to real-world racing, is optimistic, too: “We had good talks and it felt good from the very beginning. I think that we have a good package, as 2021 showed already when Ring-Racing scored two wins and three further podium results.” The 24-year-old, who was born in Essen and is now living in Fichtenberg, has a defined goal: “I would like to become champion once more and then race in DTM in 2023.” With an impressive total of seven wins from twelve races, Tim Heinemann became the inaugural DTM Trophy champion in 2020. In 2021, he won the GTC Race title with a Mercedes-AMG GT3.

Tim Heinemann and his team principal Uwe Kleen agree that three new elements are good signs for the 2022 DTM Trophy: “Scot Elkins as the new race director, Martin Tomczyk as the new series’ manager and AVL responsible for the balancing of the cars: these are good steps that will have a positive effect on DTM Trophy.”