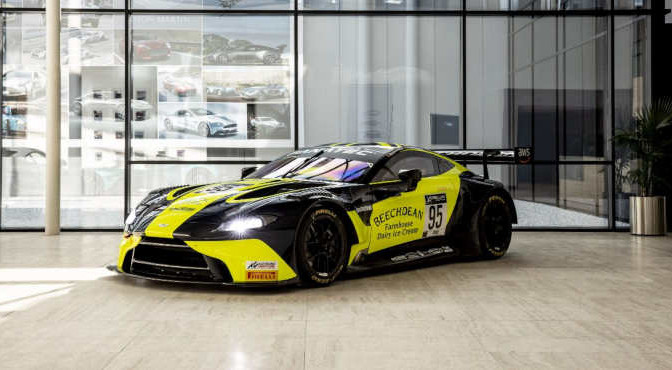 Beechdean AMR will launch an ambitious assault on the Fanatec GT World Challenge Europe powered by AWS Endurance Cup in 2022 with a star-studded driver line-up while also strengthening its links with Aston Martin Racing.

The new, closer working relationship between the two parties has resulted in a trio of Aston Martin works drivers; Maxime Martin, Marco Sorensen and Nicki Thiim forming an all-star line-up in the #97 Vantage GT3 in the pro category with sights set on challenging for outright success.

The announcement is a hugely significant one for Beechdean AMR, which has had an unbroken spell of fielding Aston Martin machinery since 2008.

The team swiftly developed into one of the powerhouses of the British GT Championship, winning seven titles from 2013-19 across the GT3 and GT4 divisions with Aston Martin Vantages.

Title success in the GTE class of the European Le Mans Series plus victory at both the Aston Martin Le Mans Festival and the Silverstone 24 Hours, plus an outright pole position at the Spa 24 Hours followed.

All of these additional successes have further enhanced the reputation of the team from High Wycombe UK and led to closer working ties with Aston Martin for 2022.

Between Belgian racer Maxime and Danish duo Nicki and Marco, the crew of the #97 Vantage GT3 can list four FIA World Endurance Drivers’ Championships plus two class or overall victories at the Le Mans 24 Hours, three at the Spa 24 Hours and seven at the Nurburgring 24 Hours.

Both crews begin their campaigns at Imola, Italy, next weekend, with a three-hour race to kick off the Endurance Cup element of the GT World Challenge Europe.

Maxime Martin, driver #95, said: “I’m excited to be returning the GT World Challenge Endurance Cup full time with Beechdean AMR and Aston Martin. This is the first time we’ve had a full works driver line-up in one car for the whole season, and I think, together with a really strong team, we have a great chance to finally prove what Vantage can do at the top level of GT racing. I’ve been really impressed so far with Beechdean AMR and Andrew Howard’s approach to the programme and I believe we will the see the results of this hard work very quickly.”

Marco Sorensen, driver #95, said: “I’m very happy to be re-joining my team-mates Maxime and Marco, and to be racing Vantage again in the GT World Challenge Endurance Cup. This series features the best GT cars and drivers in the world, and obviously that makes it a target for any driver to want to race in. We’ve proved lots of times before what we can do with an Aston Martin and I think with Beechdean AMR, the signs are there that we have the resources and the talent to do it again. I just want to go racing now.”

Nicki Thiim, driver #95, said: “The spirit within the Beachdean AMR team is really strong and everyone really wants to succeed with Aston Martin at this level. So to bring the old team back together [myself, Marco and Maxime] is a really great start, and I’m hoping we can prove – like we did at Spa last year – what a great combination we can be with Vantage. We know the car is capable of fighting for victories at this level, we just have to work hard, get our heads and go flat-out for the podium.”

Valentin Hasse-Clot, driver #97, said: “For my third season in GT World Challenge Europe endurance and my first year as a factory driver, I could not hope for a better opportunity than joining Beechdean AMR in the Gold Cup. This new class will be super-competitive, but we have a strong line-up. Andrew is a two-time British GT champion and an ELMS champion, and I know Theo very well as we won the GT4 European Series together in 2020. We already have a great team spirit, which is key in endurance racing. Imola can’t come soon enough.”

Theo Nouet, driver #97, said: “I’m extremely proud and honoured that Andrew Howard trusts me to race his car for Beechdean AMR. It’s my first year in a GT3 race car, but I’m not afraid. In fact, I felt super-good in the car when I tested with the team at the Prologue at Paul Ricard and I can say that I enjoy the much bigger challenge compared to the GT4 I raced previously. I’m also super-happy to be back also with Valentin [Hasse-Clot], with whom I’ve had success in the past. We won’t be there to play around; we’re there to fight for victories.”

Andrew Howard, Team Principal/Driver #97,: “This is a very significant day in the history of Beechdean AMR. Our aim for quite a while now has been to run a fully-pro car in a high-level international series and now we are not only realising that ambition, but doing it with three of the best GT drivers on the planet and that brings with it high expectations. As a driver, I’m delighted to have Val and Theo with me in the Gold car and we’ll certainly be looking to finish on the podium. In a wider perspective, this is an incredible opportunity for Beechdean AMR as a team to strengthen ties with Aston Martin, to establish ourselves as the go-to team for customers who want to associate with the brand and to help the Vantage GT3 achieve its immense potential in the GT World Challenge Europe.”