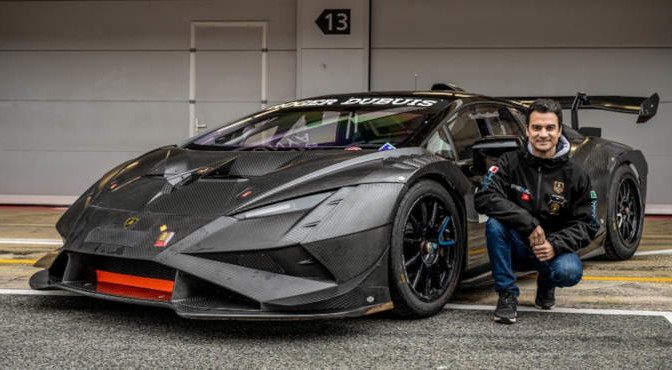 The FFF Racing Team is pleased to welcome Spanish rider Dani Pedrosa and Swiss driver Antonin Borga to the team! Next to the two crews of the LB Cup and Pro-Am category, the team will field a third pair formed by Dani Pedrosa and Antonin Borga. Also thanks to the support of Orange1, whose collaboration with the team has been proceeding successfully since 2018, three-time world champion Dani Pedrosa has chosen the chinese team based in Sant’Agata Bolognese for his first racing experience on four wheels. The Spanish rider boasts a successful career in motorcycling, with 296 races held, 153 podiums, 54 victories and three consecutive world champion titles, one in 125cc in 2003 and two in 250cc in 2004 and 2005. Dani Pedrosa will be flanked by the skilled Swiss driver Antonin Borga, who has extensive experience with the LMP and GT Series and will take on this new challenge in the Lamborghini Super Trofeo Europe 2022.

Awaiting the crew will be a Lamborghini Huracan Super Trofeo EVO2, which will roar onto the track wearing the unmistakable colors of Orange1. The whole team can’t wait to see the new crew in action: Dani and Antonin will hit the track during the official pre-season tests that will take place in Imola on March 29, before competing in the Pro-Am class in the rounds at Imola (April 1-3), Misano (July 1-3) and the Lamborghini World Final weekend at Portimao (October 31-November 6).

Giorgio Ferro – Team Manager
“We are very happy that Dani has decided to start his new career on four wheels with our team and with Lamborghini. His professional and competitive approach will surely allow him to face this new challenge in the best possible way, supported by the expert Antonin and assisted by Vitantonio Liuzzi’s advice as coach. It will be great to share, together with our partners, this new chapter of his sporting life. We welcome Dani and Antonin in the Orange1 FFF Racing family, sure that we will live together an amazing season”

Armando Donazzan – Orange1 President
“As Orange1 we are very honored to have Pedrosa as our rider, and I am sure he will prove to be an extraordinary athlete as he has been on two wheels. Orange1 will provide him with all the support he needs to express all of his abilities to the fullest”

Dani Pedrosa
“I’m very happy to start this new adventure with Lamborghini and the FFF Racing Team. It’s my first experience on the 4 wheels and, although I still have a lot to learn, I feel very excited. I can’t wait to learn all the tricks of the trade and start at my best. The hope is obviously to have fun!”