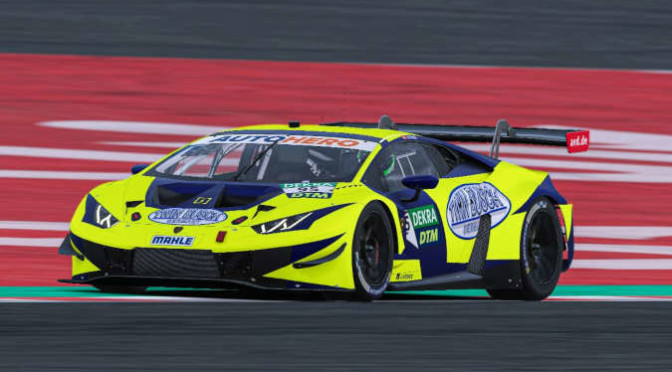 Following in the footsteps of his successful father: Nicki Thiim, a two-time FIA World Endurance Champion and the son of former DTM champion Kurt Thiim, will be racing in DTM for the first time. The 32-year-old Dane will be competing in the 16 sprint races of the long-standing series with a Lamborghini Huracán GT3 EVO run by the T3 Motorsport team from Dresden. The 2022 DTM season is getting its season underway at Portimão (POR) from 29 April until 1 May. Tickets for all the races are available at tickets.dtm.com and +49 1806 99 11 66. In German-speaking countries, the races, all of them starting at 1.30pm CEST, will be broadcast on ProSieben for the first time.

“DTM! What shall I say? The biggest dream of my career is coming true,” a buoyant Nicki Thiim says. “I grew up with DTM. During breakfast, during lunch and dinner, there always was DTM on TV and my dad was my hero, of course.” His father Kurt, who won the title with his Rover Vitesse in 1986 and was part of the Mercedes driver line-up from 1988 till 1996, ranks among the most successful DTM drivers in history. In 211 DTM races, the now 63-year-old scored 19 race wins and 16 pole positions. As recently as last season, Kurt Thiim, driving a former DTM Mercedes, staged entertaining duels in DTM Classic with his eternal rival Klaus Ludwig.

Nicki Thiim, whose career started in karting in 2000, is leaving no doubt about the fact that he never lost his focus on DTM: “Actually, it has always been clear that DTM was my DNA and that it has always just been about racing there. And now, having made it with T3 Motorsport after 20 years, the occasional detour and some title wins, absolutely is something special. I am happy to be able to race there as the first son of a DTM champion.” Following title wins in the Seat (2008) and Porsche (2013) one-make series, his overall win in the Nürburgring 24-hour race (2013) and his class win in the Le Mans 24 Hours (2014), the Sønderborg-born fair head became a works driver for Aston Martin in the GTE-Pro class of the FIA World Endurance Championship (WEC), in which he won the world championship title in 2016 and the 2019-2020 double-season. The British manufacturer has granted Thiim permission for his DTM programme with T3 Motorsport. “The teams and the drivers for the new season are saying it all. I think it is the strongest DTM field in more than ten years,” says Nicki Thiim, who will be racing with starting number 95 at T3 Motorsport alongside his British teammate Esmee Hawkey. “The team is a great crew and I am looking forward to the season.” Last weekend, Nicki Thiim got his 2022 season off to a good start with victory for Aston Martin in the WEC season opener at Sebring in Florida.

Likewise, T3 team principal Jens Feucht is looking forward to working together with the successful GT driver: “The fact that Nicki Thiim as a two-time world champion is giving us his confidence is a real honour for us. He is highly motivated, he is a particularly likable driver, has clear ambitions and is keen to be in contention at the front of the field, just as we are. Signing Nicki Thiim is the next big step in the still brief history of our team.”

“What an incredible story! His father Kurt Thiim is a champion and one of the most successful DTM drivers ever, and now his son Nicki Thiim is coming into DTM as a two-time world champion. Outstanding!”, Frederic Elsner, director event & operations of the DTM organisation ITR, is impressed by the surprising new entry. “Our 2022 DTM field is studded with great teams and outstanding drivers. Nicki Thiim is the icing on the cake, so to say. The best conditions for a spectacular season!”

Like three-time DTM champion René Rast and his teammate Kelvin van der Linde (both Team ABT Sportsline/Audi), as well as the latter’s brother Sheldon van der Linde (Schubert Motorsport/BMW), Nicki Thiim’s manager is Dennis Rostek with his motorsport agency Pole Promotion based in Bückeburg in Lower Saxony. Dennis Rostek says about the latest DTM signing: “Considering how I admired Kurt Thiim in DTM in the 1990s, now starting the DTM season with his son Nicki really is something special.”