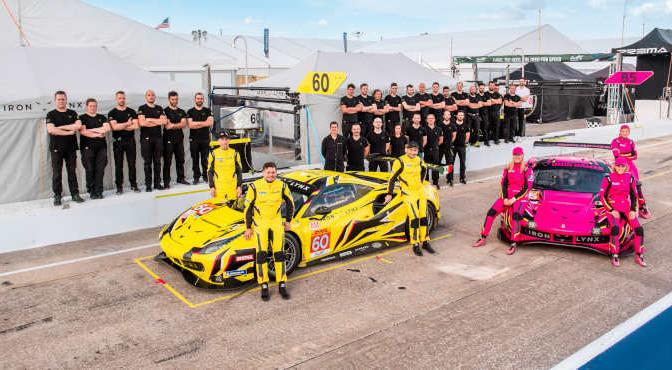 oday, Italian racing team, Iron Lynx, opened its FIA World Endurance Championship campaign at the Sebring International Raceway. A fifth-place finish for the #85 Iron Dames machine, which was the best Ferrari result in LMGTE Am, and an eighth place for the #60 Iron Lynx car set a strong foundation for the season ahead.

From the start, Iron Dames’ Sarah Bovy held position and created a gap between the chasing cars before Michelle Gatting took over the reins and began setting personal best times breaking into the top five. Meanwhile in the #60 car, Claudio Schiavoni settled into a great rhythm from the start before handing over duties to Matteo Cressoni and then Giancarlo Fisichella who would provisionally set fastest lap in the class on the way to climbing up the leaderboard.

Around the halfway mark, a major incident resulted in a red flag, bringing the pack closer together. As the race resumed, both Michelle Gatting and Matteo Cressoni were bringing the cars home after strong and consistent stints in the Florida heat.

But, with the sun fading and the rain clouds approaching in the final hour of the race, another surprise red flag was called due to a storm approaching and the law requiring track marshals to remain safe. The race didn’t resume and was called official with 20 minutes remaining, meaning Giancarlo Fisichella and Michelle Gatting finished in fifth and eighth respectively.

In LMP2, the PREMA Orlen team kicked off their campaign with a fourth-place finish and strong race-long performances, with all three drivers of Robert Kubica, Lorenzo Colombo and Louis Deletraz taking the fight to the United Autosports cars in what was a great endurance debut for the Italian racing power team.

Team Principal of Iron Lynx, Andrea Piccini, said: “We can be happy with the results. The Iron Dames car was the best placed Ferrari on track in its class.

“Especially after a short winter break with new mechanics and some new drivers, we made no mistakes with good strategy and pace. The team maximised what it had and achieved some good points, especially compared to the pace shown by Porsche and Aston Martin.

“Although this was a strange race with three red flags, we managed to bring both cars home. This was a good start to the season and we’re looking forward to the next race.”

The 2022 FIA World Endurance Championship continues at Spa-Francorchamps in Belgium for the 6 Hours of Spa on May 7th, 2022.