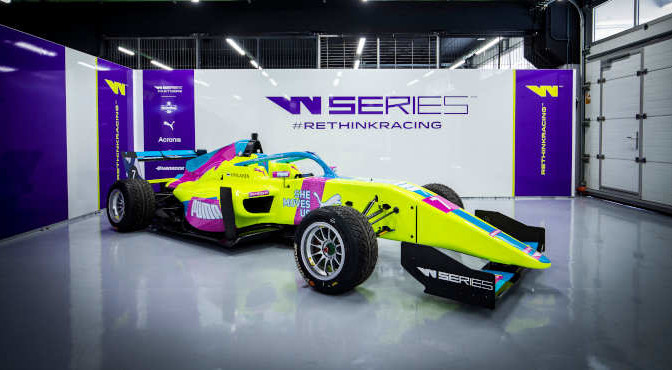 Sports company PUMA has extended its partnership with W Series, the international single-seater motor racing championship for female drivers and has signed Finnish driver Emma Kimiläinen for the PUMA W Series Team in 2022.

In 2021, PUMA Motorsport tailored racewear specifically for female drivers for the very first time. As part of the company’s women’s platform, She Moves Us, PUMA will continue to supply bespoke racewear during W Series’ third on-track season. PUMA, which is a partner of some of the most successful names in motorsport, has supplied high-performance, flame-retardant racewear for W Series’ drivers since the inaugural season in 2019.

Emma Kimiläinen has won two races in her two seasons with W Series. Her victory at Spa-Francorchamps in Belgium last August kicked off a run of four consecutive podium finishes, which saw the 32-year-old end the season in third place in the championship.

“I am very proud to be racing for the PUMA W Series Team this year. With their She Moves Us campaign, our brand and values fit together perfectly and, being a professional athlete at the top level and a mother, I hope to inspire girls and women chasing their dreams in sports,” Emma Kimiläinen said.

She will now look to take her excellent form into the 2022 W Series season, which consists of support races at eight Formula 1 Grand Prix weekends, starting in Miami, USA, in May. The PUMA W Series Team finished sixth in last year’s inaugural teams’ championship and Emma’s team-mate will be announced in due course.

“W Series has become one of the key pillars of our women’s campaign, She Moves Us, which celebrates women who move culture and sports forward and inspire others around the world,” said James Clark, Head of Sports Marketing Motorsport & Operations at PUMA.

PUMA’s campaign “She Moves Us” wants to empower girls and young women through sharing stories and joint efforts to impact girls and women’s rights globally.

“Like us, PUMA is determined to do all it can to help our drivers showcase their talent on motor racing’s greatest stage, and W Series’ drivers will once again be equipped with racewear tailored to their exact specifications, enabling them to feel comfortable in the car and perform at their best,” said Catherine Bond Muir, the Chief Executive Officer of W Series.