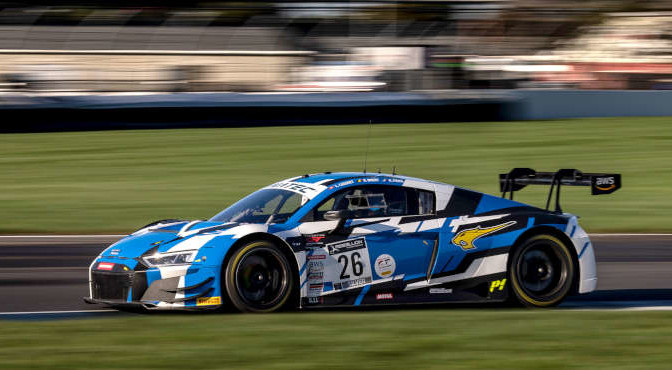 After two Junior titles and a third place in the TCR Europe, Nicolas Baert is turning to GT racing. In 2022, the young Belgian will be driving an Audi R8 LMS GT3 for the Saintéloc Racing team in the ten rounds of the GT World Challenge Europe.

In 2020, Nicolas Baert was the Belgian revelation on the international scene. For his debut in touring cars, he immediately finished 3rd in the TCR Europe while winning the Junior classification. Named “Rookie of the Year” by the RACB, the Belgian motorsport federation, the native of Waterloo made a big impression! After four years in karting and one season in Formula 4, this hyperactive young man who loves life and motor sport has immediately demonstrated that he has a place at an international level. This winter, his taste for novelty led him to the ice of the e-Trophée Andros. But that is not all! In 2022, the 20-year-old will be taking his career in a new direction by turning to GT racing.

“I really enjoyed the TCR Europe, but I have two dreams: to win the 24 Hours of Spa and the 24 Hours of Le Mans,” he confides. “So it seemed logical to me to turn to endurance racing. GT3, and in particular the highly competitive GT World Challenge Europe, is the best formula for doing so.”

Attached to the Audi brand and to the R8 LMS GT3, a car with which his father raced a few years ago, Nicolas will join the French team Saintéloc Racing. “In fact, I already know them quite well,” smiles Nico. “In mid-October, I took part in the 8 Hours of Indianapolis with them. It was my first contact with GT and I loved it! If it had not been for a penalty which pushed us back to 7th place, we would have finished at the foot of the podium in this Intercontinental GT Challenge event. Since then, I have also competed in the e-Trophée Andros with Saintéloc and I will be back at the start of the Kyalami 9 Hours in an Audi. In South-Africa, I will be sharing the driving duties with the Swiss driver Lucas Légeret and the French driver Simon Gachet. In short, I am not falling into the unknown and I am convinced that we can achieve great things together.”

The names of Nicolas’ team-mates for both the Sprint Cup and the Endurance Cup of the GT World Challenge Europe will be revealed later. “I can only tell you that, even if it is a learning year, the aim will not be to make up the numbers and that we will be aiming for podiums in the Silver Cup category,” Nicolas continues.

The Saintéloc Racing team is also delighted with this collaboration. “We discovered Nicolas in Indianapolis and he immediately impressed us with his ability to adapt to the Audi R8 LMS GT3,” says Sébastien Chetail, the French team boss. “Then, he convinced us once again with his progress in the e-Trophée Andros, where he never stopped improving each time he hit the ice track. Going together for this full programme in GT World Challenge Europe will allow us to work on a long-term collaboration, with all the advantages that this implies. His experience in single-seaters and touring cars will help him, but he now needs to learn the intricacies of GT racing. He has the potential to make a name for himself and we will do everything we can to make sure that happens.”

After the… final of the 2021 season of the Intercontinental GT Challenge during the 9 Hours of Kyalami, postponed to Saturday 5 February 2022 due to the health crisis, Nicolas will really start the 2022 season at Imola with the first round of the GT World Challenge Europe Endurance Cup. This meeting is scheduled for 2 and 3 April 2022 and will mark the beginning of a new adventure for a young man who is determined to pursue his dreams.