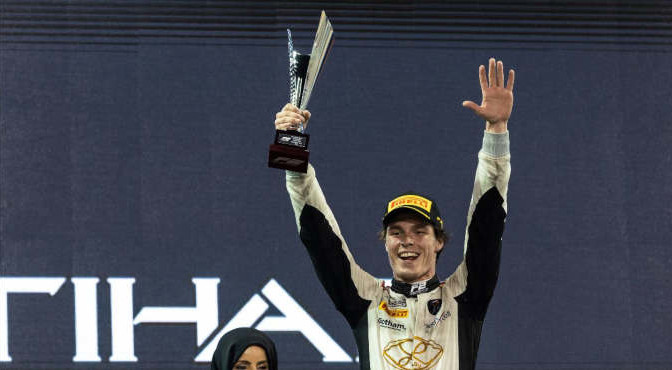 Ralph Boschung completed his best-ever FIA Formula 2 season with a podium in Sprint Race 2 in Abu Dhabi, securing a top-10 finish in the final standings.

The Swiss driver put in a strong qualifying performance to take fifth, equalling his best result in the series. In the second Sprint Race on Saturday, Ralph started on the front row and battled hard against championship frontrunners to earn third place, his second podium finish in as many rounds.

During Sunday’s Feature Race, Ralph crossed the line ninth to end the 2021 F2 season with more points, to secure 10th in the drivers’ championship and helping Campos take seventh in the teams’ standings.

Ralph will be back in the car later this week for the official post-season test in Abu Dhabi on 16-18 December.

Ralph Boschung: “We had good pace immediately in Free Practice, which is always a positive sign. We knew that we were capable of a strong lap in qualifying, so I was delighted to take fifth place, equalling my best performance in F2. Even though the car felt quick in the first race we dropped some positions, but that meant we were on the front row for Sprint Race 2. I got a solid start and battled with Guanyu Zhou and Robert Shwartzman, but the pace of their cars were on a different level this weekend, so I wasn’t able to stay ahead. I managed to keep up with them and hold off everyone else behind, and we finished on the podium. It felt amazing to be in the top three in consecutive race weekends, we earned the result on pure pace and the team fully deserved it. The Feature Race was a strange one, the car was good but the alternate strategy runners had too much speed at the end and we crossed the line ninth. We know what we need to do to continue improving next season, but I’m still really happy with how this year went. We ended on a high with two podiums, securing a top-10 finish in the drivers’ standings and seventh in the teams’ championship for Campos.

“Thanks to the team for all their work this year and I’m already looking forward to the post-season test this week and preparing for 2022. I also want to send a big thank you to my sponsors L by Raphaëlle and Casa Andrea for their support and I’m excited to see what we can achieve together next year.”