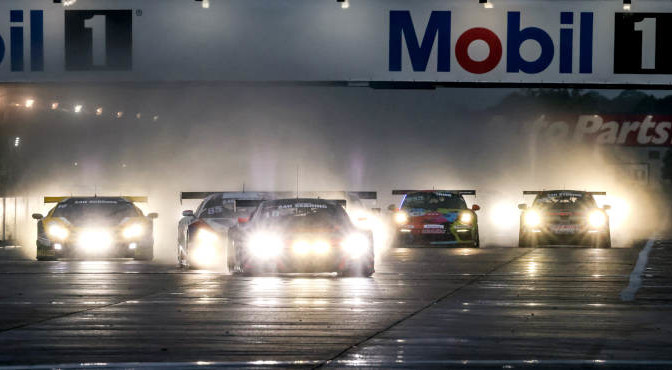 Rutronik Racing continues to lead the inaugural Hankook 24H SEBRING after a strong opening stint against both Herberth Motorsport Porsches and Leipert Motorsport.

Having held its advantage into turn one on a very wet opening lap – the result of a sudden rain shower as the cars lined up on the grid – the Rutronik Racing Audi R8 LMS GT3 (#18, Michael Doppelmayr / Markus Winkelhock / Elia Erhart / Swen Herberger) had already pulled close to eight seconds clear of the chasing pack as the rain began to dissipate. With a dry line beginning to materialize though, the pursuing #92 Herberth Motorsport Porsche 991 GT3 R (Jürgen Häring / Bobby Gonzales / Wolfgang Triller / Felix Neuhofer / Marco Seefried) started closing the gap, first leapfrogging its sister Porsche 991 GT3 R (#91, Daniel Allemann / Ralf Bohn / Alfred Renauer) before making a decisive move for the lead on the Rutronik Racing Audi.

After ditching its wet tyres for slicks shortly afterwards, the Rutronik Audi was quickly back on a charge, re-passing the #92 Porsche on-track shortly after both Herberth Porsches made their own respective pit stops. The Audi has since retained its advantage at the head of the field, while the #91 Porsche has also worked its way back past the sister #92 911 GT3 R.

The out of pit stop sequence Leipert Motorsport Lamborghini Huracán GT3 (#10, Brendon Leitch / Tyler Cooke / Dennis Fetzer / Seb Morris / Sebastian Balthasar) has also jumped ahead of the Herberth Motorsport Porsches, but was expected to pit once again for fuel as the fourth hour ticked by.

The CP Racing Mercedes-AMG GT3 (#85, Charles Putman / Charles Espenlaub / Joe Foster / Shane Lewis), which started on the front row and nearly took the lead as the green flag dropped, gambled on extending its opening stint on wet tyres on a drying surface, but has since dropped to 5th.

The Willi Motorsport by Ebimotors Porsche 911 GT3 Cup (#955, Fabrizio Broggi / Sergiu Nicolae / Sabino de Castro) is 6th on the road and holds a slim lead in ‘991’. Behind them, the second Leipert Motorsport Lamborghini – the Huracán Super Trofeo (#710, Gregg Gorski / Gerhard Watzinger / Lance Bergstein / Al Miller / Kenton Koch) – leads the way in GTX over the MRS GT-Racing Porsche 911 GT3 Cup ‘992’ (#989, Raulino Kreis Jr. / Jeronimo Guzman / Pedro Torres / Robert Lorndale). The latter, now 9th overall, had been consistently running inside the overall top eight but was handed a 30-second penalty for exceeding its maximum fuel allowance during the race’s sole Code 60 thus far. The time lost on pitroad has since dropped the Porsche to 9th.

Both Volkswagens however were caught out in the tricky conditions by an electric start by AC Motorsport, which has consistently continued to hold the lead since then.

Nordschleife Racing is also the TCX class leader after four hours following an early incident for class polesitter, and Overall TCE Teams’ title contender, CWS Engineering. The Ginetta G55 (#278, Colin White / Jean-Francois Brunot / Matt Rivard / Joe Burris / Warren Dexter) lost more than two hours in the pits after a hefty collision at turn 17, the impact of which brought out the Code 60 caution flags. The Ginetta has yet to return to the track.

The Hankook 24H SEBRING is scheduled to run uninterrupted throughout the night at the Sebring International Raceway, with the chequered flag set to be flown at 17.00 hrs local time on Sunday 21 November. The action will be live with commentary from radiolemans.com on the official 24H SERIES YouTube channel. Regular updates will also be published on Twitter (@24HSeries), Facebook (24H Series) and Instagram (24H Series). Further information can be found at www.24hseries.com.