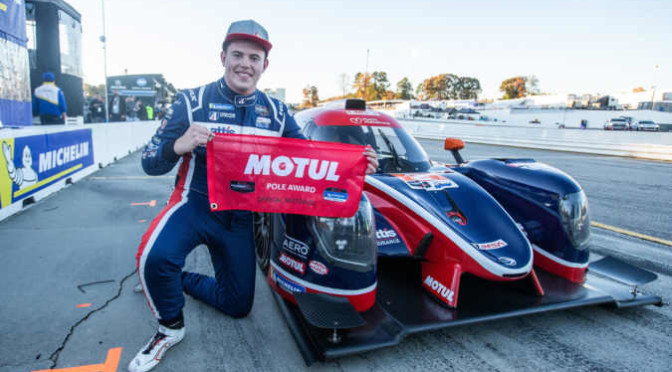 Niklas Krütten produced another impressive display on his third appearance of the year in the IMSA WeatherTech SportsCar Championship. The ADAC Stiftung Sport driver secured pole position in the LMP3 class for his team United Autosports in qualifying ahead of the ten-hour “Motul Petit Le Mans” on the outskirts of Atlanta. The 19-year-old set a time of 1:15.664 minutes for the 4.088-kilometre Road Atlanta circuit, with its twelve corners and many spectacular sections.

Krütten also impressed in the race itself, setting fast lap times and holding the lead for a long time. Unfortunately, the driver of a lapped car failed to see the number 2 Ligier JS P320 on lap 47. Krütten was forced off the track and suffered damage to the car, which eventually forced him into the pits for repairs. After the unscheduled pit stop, the trio of Krütten and his British team-mates Tom Gamble and Andy Meyrick fought their way back to the front of the LMP3 field. However, a faulty fuel pump forced the United Autosports team back into the pits. The repairs took nearly two hours before they were able to re-join the race. After ten hours and 308 laps of racing, Gamble crossed the finish line in sixth place.

Niklas Krütten: “That was a really tough race for us. My first two stints were very good and I led the race the whole time. Unfortunately, there was a collision whilst lapping a car and I had to come into the pits for repairs. We were able to catch up and take the lead again, but then came an issue with the fuel pump and we had to be towed back to the garage. We lost nearly two hours as a result. We went back out, but there was obviously no longer any chance of winning. Despite the result, I am very pleased with my performance, particularly the pole position in qualifying.”