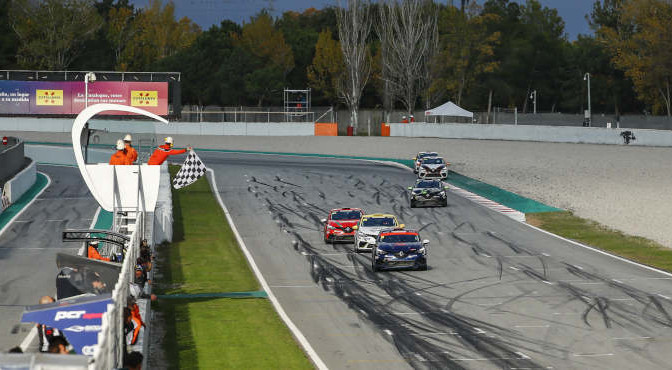 David Pouget kept the lead at the start over Nicolas Milan, who passed Anthony Jurado before the latter replied. Meanwhile, Marc Guillot overtook Alex Royo while further back in the field, a collision eliminated Javier Cicuendez (Team VRT), Valentin Simonet (GM Sport) and Alberto Sabbatini (Renault Italia by Oregon Team), who were all victims of a contact between Andrea Argenti (SI Racing Team) and Quinto Stefana (Oregon Team).

The race resumed on lap six as a few drops of rain fell after the safety car period. David Pouget lost out to Nicolas Milan, who made a superb outside pass at turn one, whilst Anthony Jurado took advantage of the situation to slot in between the two before continuing on his way to take the lead. At the same time, Marc Guillot was caught by several of his Spanish rivals.

While the titles had already been awarded to Nicolas Milan in Clio Cup Europe and Kévin Jimenez (GPA Racing) in the Challengers Cup, the Gentlemen Drivers Cup was decided between Horn and Lionel Viguier, respectively third and ninth in their category on the grid. Horn lost out when his title rival got the upper hand on lap eight and continued his climb to third place behind Jérémy Bordagaray (Team Borda Rally) and René Steenmetz (Chefo Sport). This result was enough for Lionel Viguier to seal the deal by four points from Horn, who finished eighth today.

The Clio Cup Europe will be back in 2022, with the calendar to be announced in the upcoming weeks following a stellar campaign that saw 110 competitors compete in 14 meetings across the continent.

As on Saturday, Anthony Jurado won both in Clio Cup Europe and Group B, this time ahead of David Pouget and Nicolas Milan. With the win, Anthony Jurado moved past Kévin Jimenez (GPA Racing) to finish third in the season-ending general classification. Already crowned in the Challengers Cup, the latter knew the final order of his rivals as Alexandre Albouy finished second today behind Jerzy Spinkiewicz (Uniq Racing) to seal his second position ahead of Mathieu Lannepoudenx (Milan Compétition), who suffered a radiator issue two laps from the chequered flag. Lastly, Jérémy Bordagaray also secured second place to Laurent Dziadus (Team Lucas) in the Gentlemen Drivers Cup with his Race 2 win today.

David Pouget ended his season with a victory over rival Nicolas Milan, who was crowned yesterday, and Spain’s Alex Royo in Group D. Meanwhile, Alejandro Schimpf got the better of twin brother Adrian Schimpf and Nicolas Abella (Chefo Sport) to win in the Challengers Cup. Fourth in this category after a great battle with Mathieu Lannepoudenx and Kévin Jimenez, Alexandre Albouy did what was necessary to win the category title. In the Gentlemen Drivers class, Rene Steenmetz marched onto the top step of the podium, followed by fellow Dutchman Stephan Polderman, whose second place ahead of Horn (GPA Racing) was enough to win the title. Finally, Milan Compétition secured a grand slam in the team classifications, defeating GPA Racing by only five points !